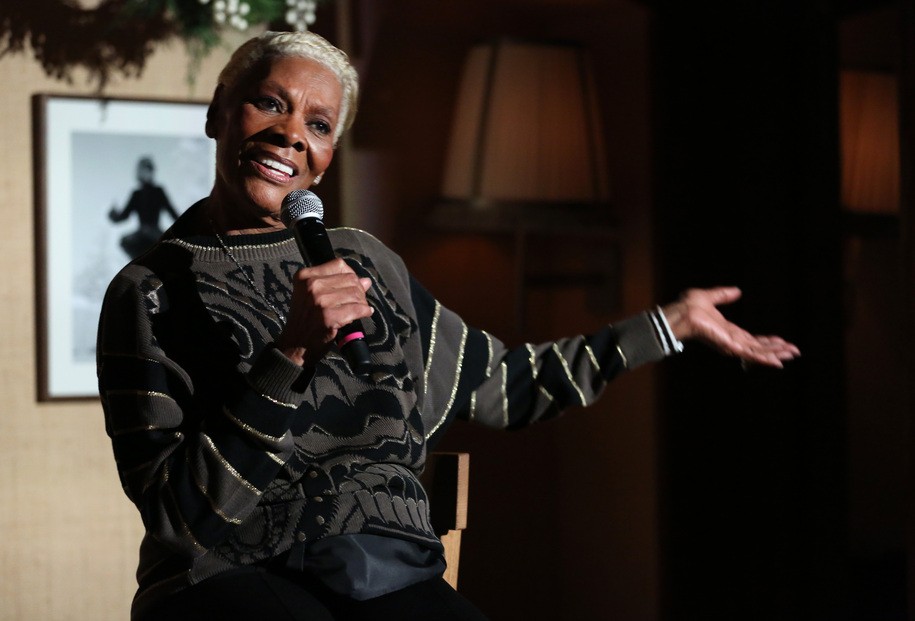 In the perilous times we are faced with as the COVID-19 epidemic surges, and as voices of hate try to drown out those of us who celebrate, uplift, and care for our fellow citizens, I had a hard time writing my annual Christmas music story this year. I found myself looking for things to lift my spirits, or simply bring a smile to my face.

I came across a series of humorous exchanges on Twitter, from none other than Miss Dionne Warwick, who celebrated her 80th birthday earlier this month, on Dec. 12. Watching her trade words with “youngsters” as she learned to use Twitter had me laughing, since at 73, I’ve been having fun there as well.

So for this Christmas music special, I bring you Miss Dionne.

I covered Miss Dionne for the #BlackMusicSunday series back in August, but as a belated birthday gift, combined with Christmas, I wanted to highlight her again.

Though it is not a holiday song, the Warwick classic “What the World Needs Now Is Love,” which she reissued last year, fits the spirit of the season. We all could certainly use more love.

The song was originally recorded by Jackie DeShannon, with music by Burt Bacharach and lyrics by Hal David. But as Jennifer Gavin wrote for the Library of Congress in 2009, it’s Warwick’s 1966 version that sticks out to the lyricist.

David said the song has been recorded by more than 100 singers, including Jackie DeShannon, the voice on the original hit version. “My favorite version is Dionne Warwick’s. She always interprets my lyrics in a way that sounds as though she had written them herself,” David said.

Kimberly A. Hines, who writes at SoulBounce as Butta, described the narrative of Warwick’s new video.

We see Auntie Dionne sitting in her posh living room and watching television to open the visual. She’s watching the daily news, and it’s as stressful as ever with stories about everything going wrong in the world. Instead of getting stressed out about the real-life drama playing out on her TV screen, Dionne starts singing to calm her – and our – nerves. The video splits its time between scenes of the singer in present day with vintage footage and photographs of her many performances over the years by herself and with famous friends, such as Stevie Wonder and Gladys Knight; a young girl drawing a picture and a woman returning home from work to an overwhelming pile of bills and notices. The classic clips give the video a nostalgic feel, while the scenes with the young girl and woman play out to reveal a twist that will give you the warm fuzzies when the video reaches its conclusion.

For some background on Warwick’s career, which spans decades, a good place to start is with her 2018 episode of the PBS Documentary series My Music.

The documentary packs so much of Warwick’s career into just 54 minutes.

MY MUSIC: DIONNE WARWICK – THEN CAME YOU traces the singer’s musical roots in the church, where she first performed in a gospel group. She became a background singer performing with classic R&B artists, leading to her discovery by songwriter-producers Burt Bacharach and Hal David, who formed a three-way musical marriage with Warwick on countless hits including “Walk On By,” “Do You Know The Way To San Jose,” “Anyone Who Had A Heart” and “I’ll Never Fall In Love Again.”Among the friends and colleagues celebrating Warwick in the new PBS musical biography are Burt Bacharach, Barry Manilow, Smokey Robinson, Johnny Mathis and Gladys Knight, who joined Warwick, Elton John and Stevie Wonder for the smash anthem “That’s What Friends Are For” in 1985 to raise funds and awareness of the rising AIDS epidemic.

Those who grew up with Warwick’s music probably assume that everyone knows her. Hilarity has ensued as a new generation is now being introduced to her on Twitter. Warwick took to the platform, in part, due to the COVID-19-fueled cancellation of her performance and touring schedule.

Warwick, new to tweeting, kicked off the month of December by “having a ball” and spreading love, along with raising money to help feed the hungry.

I have been reading through your question submissions. Don’t worry. I didn’t forget. 👀 pic.twitter.com/iAvLEi6dNJ

Miss Dionne decided she wanted to say hello to Taylor Swift; fans explained that she needed to put an @ in front of Swift’s name. A few days later, Swift responded.

I just saw that you tweeted me!! I’m a huge fan and I respect you so much, thank you for wishing me well. I hope you have a wonderful holiday season, thank you for spreading joy 💕🥰🙏

She then sparked a Twitter storm with this humorous query to Chance The Rapper.

Hi, @chancetherapper. If you are very obviously a rapper why did you put it in your stage name? I cannot stop thinking about this.

Minutes later, she offered this follow up, which had me rolling on the floor laughing.

I am now Dionne the Singer.

Chance responded in minutes, with the respect and adulation Warwick deserves.

I will be whatever you wanna call me Ms Warwick. God bless you 💙💙

Of course I know you. You’re THE rapper. Let’s rap together. I’ll message you. 🤷🏽‍♀️ https://t.co/7ku9SMNUMB

What started as a Twitter exchange led to this news.

Record producer/manager Damon Elliott, who earned his share of Grammy and platinum-selling success working with Pink and Mya – among others – will produce an upcoming single release he’d written, “Nothing’s Impossible” with (Dionne) Warwick, Chance (the Rapper) and other artists to be announced. Elliott is the son of Dionne Warwick.

“My Mom and I had a moment to speak with Chance after she tweeted him about the word “The” in his name,” explains Mr. Elliott. “They had such an amazing conversation that led to them discussing the Hunger Not Impossible initiative (www.notimpossible.com) – they’ll receive portions of proceeds from her upcoming 80th birthday/holiday celebration. The result of our conversation with Chance is this new single we’ll be recording soon, and we’re all looking forward to this collaboration.”

Miss Dionne hosted one hell of an 80th birthday party, which was not broadcast (sorry, no clips). She featured performers from her 2019 Christmas album; I’ve posted some of those tunes below.

However, she got a surprise “birthday gift” from the writers at Saturday Night Live, who didn’t miss the hilarity of her Twitter debut. Their tribute to her was this sketch, with Warwick being played by Ego Nwodim.

This was a hilarious birthday gift. Thank you, @nbcsnl. That young lady’s impression of me was very good and who knew @BrittaniWarrick had so many jobs? 😂❤️ https://t.co/CClR1Kly6C

Earlier in December, Miss Dionne queried her Twitter followers about their favorite holiday tunes. She got a response from Questlove (Ahmir Khalib Thompson), who is co-leader of The Roots, a music historian, and the drummer on The Tonight Show.

Here are a few video selections from Questlove’s playlist. Have you heard them all?

Warwick was simply elated with her new Twitter connections.

A playlist from @questlove and a sweater from @jimmyfallon means I can finally go to sleep a happy lady. Thank you! Have a wonderful night. Stay kind. 🥰

Warwick, of course, has made several Christmas albums over the years. The most recent one was recorded in 2019, in collaboration with a wide variety of artists including Dianne Reeves, Johnny Mathis, John Rich, Ricky Skaggs & The Oak Ridge Boys, and Michael McDonald.

In the 1960s, Warwick encouraged us to “Walk on By.” In the ’70s, “Then Came You” became her first number-one hit on the Billboard Hot 100. In the ’80s “That’s What Friends Are For” — with Warwick singing alongside Gladys Knight, Elton John, and Stevie Wonder — became one of the most popular songs of the decade.

Warwick, 78, has earned six Grammys (including the 2019 Grammy Lifetime Achievement award) and has sold over 25 million albums and 75 million singles, according to Billboard — and she’s not done.

In October, she released her 38th studio album, Dionne Warwick & the Voices of Christmas.

Here she is with jazz singer Dianne Reeves.

One of my favorite Christmas tunes from Miss Dionne is “This Christmas” from the show Some Lovers, with music by longtime collaborator Burt Bacharach, and lyrics by Steven Sater.

For those of you who want some extended musical play on Christmas Day or during the rest of the holiday, 1993’s Christmas Time in Vienna II is a wonderful concert to queue up. Placido Domingo opens the concert with “Hear my Song,” and then introduces Dionne Warwick to hearty applause. She sings “Oh Holy Night,” and they go on from there to sing favorites that are not just holiday tunes. The concert includes “Ave Maria,” “God Rest Ye Merry Gentlemen,” “The Christmas Song,” “Feliz Navidad,” and more.

Merry Christmas to those of you who celebrate it, and a safe and healthy wintry season to all.

Join me in the comments to play your favorite holiday tunes. Let’s gather together in this time of isolation, to share joy and some of that love Miss Dionne’s always singing about.

In case you want to explore some of my other musical stories from Christmases past, here’s a list to make it easy.

Jazzin’ it up for Christmas

What child is this? St. Francis, crèches and President Obama

Enjoy an a capella Christmas

Born on Christmas Day: The Chevalier and Cab Calloway

‘O Holy Night’—a gift to us from a Christian, a Jew and an abolitionist

The king of Christmas soul

Christmas in her soul: Laura Nyro