A day later, everything about the bombing in Nashville remains as puzzling as it was on Christmas 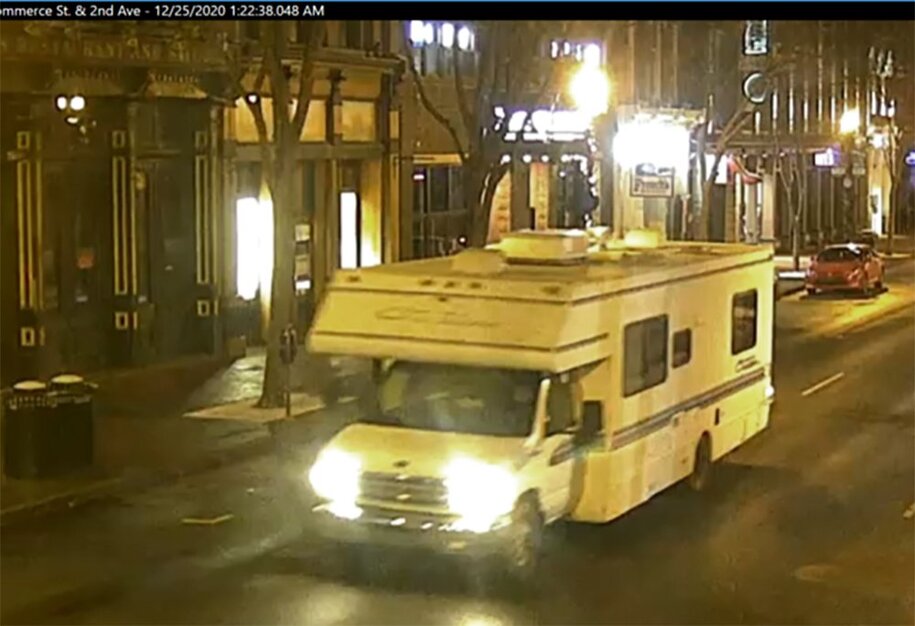 The account told by those nearby is essentially the same: At 4:30, in the pre-dawn hours on Christmas day, there was first what appeared to be several bursts of very rapid gunfire.  Whether these were actual gunshots, or a recording of the same, they were loud enough to wake several people and generate calls to the police describing what seemed to be fire from automatic weapons. Soon after, a loud voice began to deliver a repeating message.

Police, who had responded to the reports of shots fired, worked quickly to help get people out of the area, limiting the known casualties to three. But police are also reporting that among the debris is “tissue” that could be human remains. Whether those remains come from someone who was in the RV at the time of the explosion is unclear.

The RV itself appears to have been based on a Ford truck. There were no plates either visible in the images released, or found in the debris. CCTV footage shows that the RV arrived on the scene at 1:22 AM Christmas, three hours before the sounds of gunshots and announcements began. There has been no news of whether anyone was seen exiting the RV after it arrived. It’s unknown if the police have found VIN numbers or anything else that would help in identifying the RV.

The gunshot sounds came in three bursts, a short time apart, and were apparently designed to draw attention. The voice coming from the RV was computerized, and may have been generated from a system onboard the RV rather than being a recording. The type of explosive used has not been made public, though it seems unlikely that it was ammonium nitrate, as in the Oklahoma City bombing. That bomb contained 13 large barrels, each of which contained nearly five hundred pounds of material. There is some suspicion, based on the size of the fireball and heat generated by the blast, that the Nashville bomber (or bombers) had access to the kind of high explosives materials that cannot be readily purchased for mining, agriculture, etc. On the other hand, it may have been the result of something more commonly available, carefully packaged and exploded.

Overall, this is an incident of terrorism that on the surface reflects a frightening amount of planning. It was not just some people loading  bags of ammonium nitrate into the back of an RV and applying a blasting cap. Everything about this incident speaks to a level of coordination that has generated intense speculation. And unlike the Oklahoma City bombing, everything about the incident indicates the desire to deliver a violent message without running up a large body count … which is confusing, at best.

On Friday evening, right wing social media was filled with rumors that tied the explosion to everything from a supposed series of coordinated mass shooting incidents across the country, to Chinese troops supposedly fighting in Maine, to an AT&T facility investigating Dominion voting machines. All of which is pure fantasy. However, just because there all these “theories” are themselves lies based on lies, that doesn’t mean that the bomber him, her, or themselves aren’t following some equally obscure belief. Speculation has also swirled around the account which uploaded the video below of the recording. The YouTube account contains little information about the creator, and no other videos, making it the subject of numerous unsubstantiated claims.

And of course, the longer this incident goes unsolved, the more fear is generated that it could happen again.

BREAKING: This is the RV that exploded on 2nd Ave N this morning. It arrived on 2nd Ave at 1:22 a.m. Have you seen this vehicle in our area or do you have information about it? Please contact us via Crime Stoppers at 615-742-7463 or online via https://t.co/dVGS7o0m4v. @ATFHQ pic.twitter.com/JNx9sDinAH