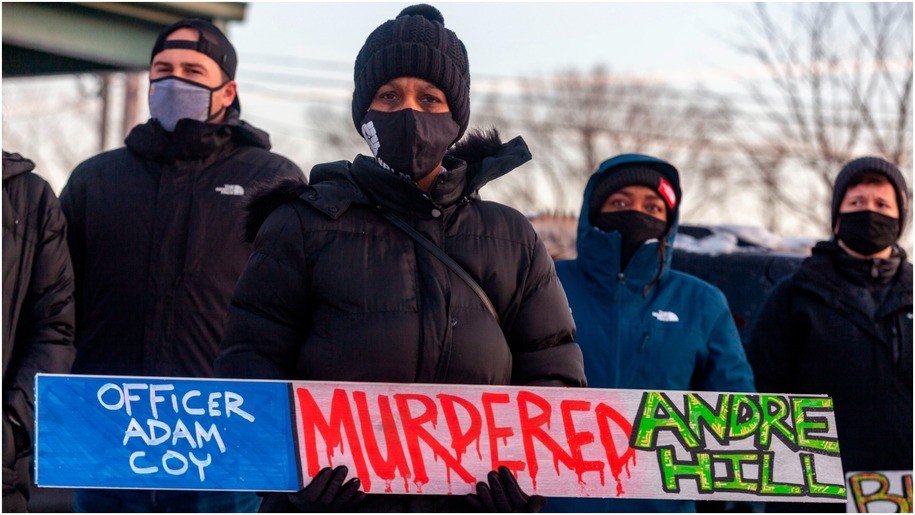 A white Ohio cop who shot a Black man within 10 seconds of encountering him and then left him bleeding without aid for more than five minutes was fired Monday, according to civil rights attorney Ben Crump. Crump, who is representing the victim’s family, tweeted Monday that a preliminary autopsy report showed Andre Hill, a 47-year-old father, was shot multiple times and that his death has been ruled a homicide by the local coroner’s office. Adam Coy, a 19-year veteran of the Columbus Police Department, shot Hill after police were called to the area on a non-emergency call Dec. 22 to report an SUV was being turned on and off, Columbus Mayor Andrew Ginther said during a press conference Wednesday.

When Coy, 44, encountered Hill at about 1:30 AM on the 1000 block of Oberlin Drive, Hill was sitting in a vehicle housed inside an open garage. Coy and another officer on the scene shined flashlights toward Hill, who was shot as he walked toward the cops holding his cell phone in the air. Coy’s body camera video was not turned on at the time of the shooting, so authorities relied on a “look back” feature of the camera that showed 60 seconds of footage before the camera was turned on, Ginther said.

Crump tweeted Tuesday Coy’s termination was only a first step in getting justice for Hill. “Officers treated Andre like an animal, refusing to render aid and leaving him for dead,” he said in the tweet. “They watched as life left his body. Someone must answer for that!”

Officer Adam Coy fatally shot Andre Hill. His termination was only the first step in getting justice! Officers treated Andre like an animal, refusing to render aid and leaving him for dead. They watched as life left his body. Someone must answer for that! #JusticeForAndreHill pic.twitter.com/18JBduopkn

“It’s outrageous and unconscionable that an officer responding to a non-emergency call would default to concluding that Andre Hill was a threat and fire multiple, deadly rounds into him, when Andre was only holding a cell phone,” Crump said in a Twitter thread. His “death is another tragic example of the tendency of police to view Black people as criminal or dangerous, and it points to the need for comprehensive, national police reform.”

The attorney applauded public safety officials in a statement for their decision to fire Coy, who didn’t attend a disciplinary hearing but was represented by a local facet of the Fraternal Order of Police Monday morning. “We look forward to reviewing all the bodycam footage and determining everything that happened leading to Andre Hill’s death,” Crump said in the statement. “We need to redefine a relationship between police and communities of color in which it doesn’t turn deadly for a Black person with a cell phone to encounter a law enforcement officer.”

Public Safety Director Ned Pettus Jr. upheld Columbus Chief Thomas Quinlan’s recommendation to fire Coy Monday night. Coy had earlier been stripped of his police powers, badge, and gun and was ultimately fired for failing to turn on his body camera, failing to render aid, and violating the department’s use of force policy. “The information, evidence and representations made by Chief Quinlan as the investigator are, in my opinion, indisputable. His disciplinary recommendation is well-supported and appropriate,” Pettus said. “The actions of Adam Coy do not live up to the oath of a Columbus Police officer, or the standards we, and the community, demand of our officers.”

The termination of Adam Coy from Columbus Division of Police does not bring Andre Hill back to those who love him. I applaud Safety Director Ned Pettus and @ChiefQuinlan for their swift action in firing Mr. Coy. https://t.co/IDRDzNmxsy

It’s unclear whether Coy will appeal his termination, a right his union contract entitles him to, but in more cases than not—11 of 14 over a decade—the terminations of Columbus police officers stood, according to an investigation from local radio station WOSU.

Pettus said in a statement The Columbus Dispatch obtained that in Coy’s case “known facts do not establish that this use of deadly force was objectively reasonable.” Quinlan similarly condemned Coy’s actions, which are now the subject of a criminal investigation by Ohio’s Bureau of Criminal Investigation, in a statement. “When I became chief, I changed our core values to include accountability,” he wrote. “This is what accountability looks like. The evidence provided solid rationale for termination. Mr. Coy will now have to answer to the state investigators for the death of Andre Hill.”

RELATED: Black man left to die by cop who shot him in Columbus, mayor says