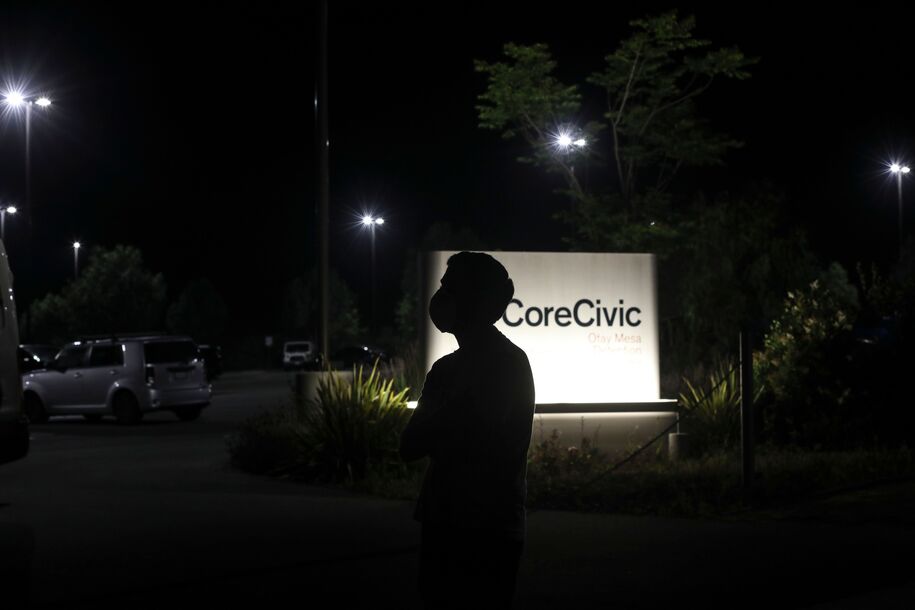 “Deficiencies,” ICE says in its report, really means “violations.” But it’s using “deficiencies” because it doesn’t sound as bad as “violations.” Especially in light of the fact that this privately operated detention camp, Otay Mesa Detention Facility in San Diego, was site of one of the worst COVID-19 outbreaks and was where Carlos Ernesto Escobar Mejia was jailed, got sick, and became the first detained immigrant to die from the virus.

Among the eight violations at the CoreCivic camp were immigrants requiring mental health care not getting proper follow-up regarding their medications, or even basic information about what they were taking, the LA Times said. “One detainee—who tested positive for COVID-19 in October—complained of being unable to discuss more than one health issue at a time when being seen by the facility doctor.”

Another issue was phone lines repeatedly cutting out during calls. This is alarming because this is the same camp where officials intentionally blocked immigrants from making phone calls to advocates until public pressure forced them to backtrack. “We also realized we weren’t getting calls from our clients,” Al Otro Lado, an organization that provides critical legal assistance to asylum-seekers, said in June. “We suspected that maybe our attorneys’ numbers had been blocked. And now there is proof to confirm our suspicions.”

“ODO interviewed 12 detainees, who each voluntarily agreed to participate,” ICE said in its report. “None of the detainees made allegations of discrimination, mistreatment, nor abuse.” I guess if you don’t count the conditions that resulted in the numerous violations described in the report? Nor can a virtual inspection really scratch the surface of what’s happening at these wretched camps.

As Daily Kos noted earlier this week, Otay Mesa was where Escobar Mejia contracted COVID-19 before dying in a hospital on May 6. He similarly complained about his treatment while detained there, saying he wasn’t receiving proper care for his diabetes. A lawsuit filed by his family against ICE and CoreCivic said officials delayed getting him proper medical attention, and that by the time he was finally taken to a hospital, “Mr. Escobar was gasping for air and dying. He received a blood transfusion but he had already been too weakened by the virus.”

“CoreCivic deprived him of adequate personal protective equipment, proper social distance, and appropriate treatment, all with the knowledge and participation of ICE and its officials,” the complaint stated according to The San Diego Union-Tribune. “His death did not have to happen.” It didn’t.

But as I’ve said and will keep repeating, ICE steadily refuses to released detained immigrants as a public health measure amid the novel coronavirus pandemic, even though it has every power to do so today. The LA Times reported “[t]he facility has the capacity to hold 1,142 people in ICE custody, the report says.” But, “[t]he average daily population and current counts of men and women at the facility were redacted, though previous reports have published these numbers.” Even as Otay Mesa has seen lawsuits from even its own workers over its handling of the virus, it continues to refuse to release them.

“The administration of President-elect Joe Biden must do more than reverse the cruel immigration policies of the Trump administration,” writes American Civil Liberties Union federal immigration policy counsel Madhuri Grewal. “While the Trump administration’s policies have been particularly egregious, they are just the latest manifestation of a system that is fundamentally flawed. It is not enough to just turn back the clock on the past four years. It is time to put an end to the Immigration and Customs Enforcement detention machine.”