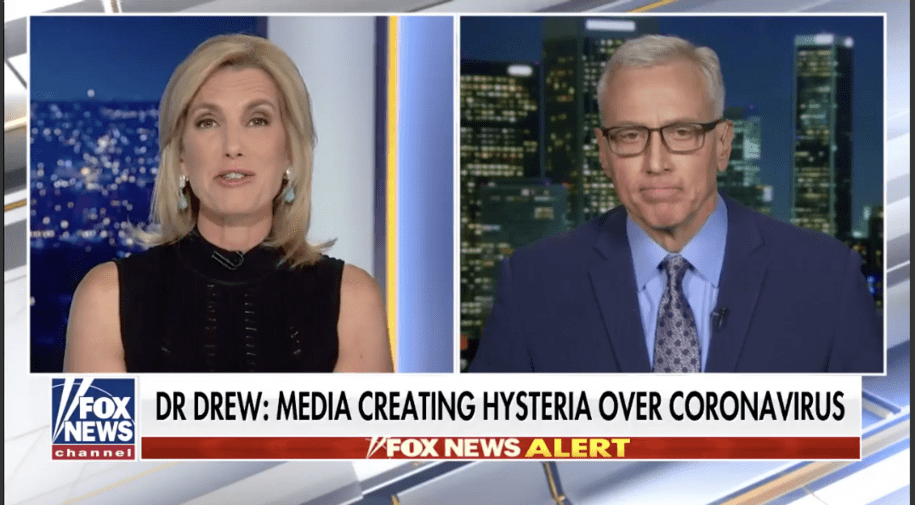 As cases of the novel coronavirus continue to increase nationwide, many individuals who once denied the virus are either apologizing for downplaying the virus or suffering from it. Amongst them is celebrity doctor Drew Pinsky, known as Dr. Drew, who revealed on Instagram Tuesday that he tested positive for the virus.

His Instagram post included a picture of him in bed holding up an energy drink while his wife wore a face mask. “Drew is home, under survelliance and fever is down,” the post read. “Thanks Dr. Zelenko, Dr. Yo and Dr. Jeff for the superior care and advice. Drew is feeling better and will hopefully get well soon.” The caption also noted that his wife tested negative.

Pinsky’s diagnosis follows the apologies he made earlier this year for both downplaying the virus and mocking individuals who warned against it. In various media appearances at the start of the pandemic, Pinsky consistently disregarded the severity of the virus and compared it to the common flu. In a viral TV interview on March 2, he called the coronavirus pandemic “a press-induced panic.”

“Way less serious than influenza — that should be the headline,” he said during the interview with KTLA-TV. By April as the virus spread to millions across the globe, Pinsky apologized for his ignorance in a series of videos shared on YouTube. The videos consisted of clips from both his online show, “Ask Dr. Drew,” his podcast, and other media appearances during which he claimed the virus was not a big deal.

According to USA Today, the apologies were prompted by an online video shared anonymously on Twitter that puts together clips from his media appearances, including one in which he noted that the probability of dying from COVID-19 was less than being hit by an asteroid.

“My early comments about equating coronavirus and influenza were wrong. They were incorrect. I was part of a chorus that was saying that, and we were wrong. And I want to apologize for that,” he said in a video. “I wish I had gotten it right, but I got it wrong.”

After sharing his coronavirus diagnosis on Instagram, Pinsky also shared a video on the platform thanking his fans for their support and added that he has taken “a lot of good medication.”

“COVID is no fun, I don’t recommend it, but I’m sort of through the viral phase, which is when the virus is reproducing,” he said, before revealing that he had been “wishing for” a positive coronavirus test “because I had this terrible acute febrile illness and was testing negative, and if I did not have COVID, I had acute lymphocytic leukemia, which I did not want to have,” he said.

“So COVID would explain the whole thing nicely and we have some many good treatments now for COVID. And I look forward to the immunity on the other side of this,” he continued.

As The Hill noted, while some people who recover from COVID-19 are believed to have developed at least some lasting immunity to the virus due to antibodies that are produced to fight infection, it is unclear how long this protection lasts in immune system memory. According to the World Health Organization, while contracting COVID-19 a second time is uncommon, it is not impossible.

As the year comes to an end, health officials predict the spread and conditions of the pandemic will only increase and worsen. Healthcare facilities and hospitals across the nation are reaching capacity as high numbers of individuals are being admitted daily. According to the COVID Tracking Project, at least 121,235 patients were hospitalized with COVID-19 in the U.S. on Monday alone. To date, more than 19.5 million people in the U.S. have been infected with the novel coronavirus and over 340,000 have died as a result, according to The New York Times database. At least 228,700 new cases of COVID-19 were reported on Dec. 30.