Paying tribute to the queen of the jazz organ: Shirley Scott 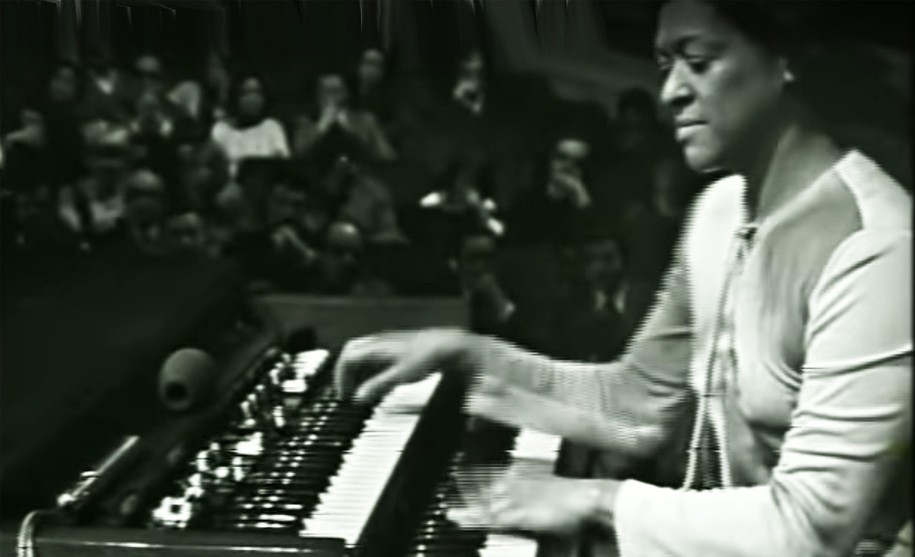 I’ve had organ music on my mind, probably because it’s still the holiday season, which continues until Jan. 6, which is Epiphany or Three Kings Day, also known as the 12th Day of Christmas. It’s an instrument I tend to associate with sacred concerts I’ve attended in cathedrals, or with choral performances I’ve been a part of in churches and concert venues. As I sat here at the keyboard imagining soaring cantatas and oratorios, jazzy notes started sounding in my head, so I decided to open up the new year of #BlackMusicSunday stories featuring jazz organists.

Decision made, I really enjoyed researching and preview listening to soul-jazz Hammond organ giants like Jimmy Smith, Brother Jack McDuff, and Jimmy McGriff. However, I was curious about female organists, since when I was growing up I knew quite a few women who played the organ in church. A name that kept popping up as I Googled was “Shirley Scott.” I admit I wasn’t very familiar with her music or her history, but when I read a review of her 1958 debut album “Great Scott!” by Rusty Aceves, I was intrigued. Aceves spoke of the barriers she faced, and overcame, to become known as “The Queen of the Organ.”

The uphill battle faced by Scott and all other women in jazz to be taken seriously as musicians and equals can be seen in the liner notes for the original release, which are a typical product of their time and express the era’s prejudicial mindset, including such unfortunate declarations as: “Shirley Scott is a girl. At the organ she does a man-sized job.”

That kind of sexist mindset is still found today, and not just in music. However, Aceves points out:

So join me as I explore 40 years of Shirley Scott and her instrument, starting off with that first album. AllMusic reviewer Richie Unterberger wrote:

Scott’s first album as a bandleader put her at the head of a trio, backed by the rhythm section of George Duvivier on bass and Arthur Edgehill on drums. While she’d already established herself as an organist of note in Eddie “Lockjaw” Davis’ band, Great Scott! was her first out-front contribution to popularizing the organ in a jazz format that also drew on parts of blues and soul music. She displays admirable command of the instrument’s swoops and funky glows here, mixing up hard-charging uptempo numbers, ballads, Latin-influenced tunes (“Brazil” and “Nothing Ever Changes My Love for You”), and bluesy walking beats (as on her cover of Cole Porter’s “All of You”)

Digging deeper into Scott and her history, I was elated to find this spotlight piece with two of her proteges talking about her, and her influence in this NPR Jazz Night in America mini documentary.

Jazz is taught at universities now, and artists like saxophonist Tim Warfield and trumpeter Terell Stafford teach at them. But they know that jazz is taught more through listening than reading; more on the bandstand than the classroom. And they learned those lessons from the organ giant Shirley Scott, who died in 2002.

Known as the “queen of the organ,” Scott was one of several Philadelphians who developed the electric Hammond B-3 into a viable instrument for a soulful, bluesy style of jazz. With dozens of recordings to her name, she was already a major voice when she became the leader of the house band at Ortlieb’s Jazzhaus. Among the young players who timidly found their way onto the stage at Ortlieb’s were Warfield and Stafford — and, in doing so, they got a lot more than they bargained for.

In this documentary short, Jazz Night In America remembers Shirley Scott through the tales of two of her final proteges and bandmates.

Her 2002 NY Times obituary details her impressive and prolific output.

Ms. Scott emerged in the mid-1950’s, the golden age of Hammond B3 organ jazz, with a quick, punchy sound that merged bebop, gospel and the blues. She had a lighter touch than Jimmy Smith, the leading organist in jazz, and relied on the blues less heavily than he did. In her groups with the saxophonists Eddie Davis, known as Lockjaw, and Stanley Turrentine, to whom she was married for a number of years, Ms. Scott produced some of the most influential recordings in the smoother, more pop-oriented soul-jazz style.

Her recorded output was great, with more than 50 albums as a leader to her credit, most on the Prestige and Impulse labels. Her first recordings were with Davis, and she played with him on a number of classics, including his ”Cookbook” albums and the 1958 hit song ”In the Kitchen.”

In 1960 she married Turrentine and made a number of albums with him over the next decade, including ”Soul Shoutin’,” ”Blue Flames” and ”Hip Soul.” Their music together was often intense, but Ms. Scott also recorded plenty of easygoing tracks, often including show tunes and pop covers like the Beatles’ ”Can’t Buy Me Love.”

Here she is with Turrentine playing “Soul Shoutin.’”

In 1964 she recorded this live album, aptly titled “Queen of the Organ.”

After listening to Scott and other jazz organists, I thought I should dive into the history of the organ and jazz. One of the more interesting essays I found was written quite a while ago in 1988 by film and music historian Geoff Alexander. Though he noted that looking back on his work his conclusions about the death of the jazz organ were wrong, I found his section on the audience and buying market to be telling.

Those wishing to find good jazz organ records in their favorite record store may be faced with serious disappointment. Outside of a couple of Jimmy Smith discs, and perhaps another by Jack McDuff, the shelves in new record stores are rarely stocked with organ records. Used record shops often prove to be a bonanza, with many older titles drastically marked down in an effort to move them out, and the collector can easily walk out with an armload of worthwhile organ records for under twenty dollars. It of course shouldn’t be this way: this magnificent jazz instrument shouldn’t be relegated to the cut-out bins and the flea markets, but it is, and one must face facts. The jazz organ is a dying instrument.

One reason for its impending death is that the majority of record buyers in this country are white, and the white community by-and-large has never quite been able to embrace this instrument in a jazz or “hip” context. The conception of the organ in the white community rarely goes beyond organ-and-chimes at Christmas, or “ballpark organ”, or Organ-Goes-Hawaiian, or worse yet,slow, meandering organ accompanying spoken romantic poetry. The closest most of these people get to the organ is when they attend “appropriate”functions like weddings and funerals, and they (and their children) are the record buyers.

In the black community, it’s a different story. Far from the funereal aura of the organ found in most white churches, the black church has continually fostered what I would term almost a bacchanalian approach to the instrument. In touch the same way as the black preacher verbally walks the line between the sacred and the profane, the organ in the black church often produces highly-charged, emotional, fast-paced,and ‘danceable’ music that bears a direct kinship to jazz and blues. Some of the best jazz organists began playing in church (Fats Waller and Charles Kynard, to name two), and in this dying era of the instrument as a true force in jazz, many of its best players will find a haven there. If, after reading this paper, the reader wishes to hear the instrument and yet can’t find a room with an organ trio, I recommend going to a black church in Oakland, Akron, Baltimore, or any other urban black neighborhood and attending a Sunday evening service. The organists there are usually quite good, and occasionally magnificent.

Though he does not address Scott’s work other than mentioning that she’s one of the people who is part of the long list of organists influenced by Jimmy Smith, I hadn’t considered the marketing aspect of who buys what and why. Though I didn’t grow up in the Black church, I was no stranger to its influence or its sound.

Scott’s choice of instrument didn’t seem to be church-related. In Peter Vacher’s Guardian obituary, he wrote:

Scott was born in Philadelphia. Her father ran a jazz club – or speakeasy as she later suggested – in the basement of the family home, while her elder brother was a competent jazz saxophonist. Initially drawn to the piano, she took up the trumpet at Philadelphia girls’ high school, won a scholarship and became adept enough to play in the all-city schools band,although, at one point, she ran away as pianist with a touring band.

Her conversion to the organ came when, at 18, she heard a Jackie Davis record; the arrival of Jimmy Smith in Philadelphia was a further spur. Suddenly, club owners wanted organ players and, Scott, having learned the mechanics of the instrument, soon landed jobs with local bands, once playing with John Coltrane in a trio supporting the Hi-Tones vocal group.

When the tenor-saxophonist Eddie “Lockjaw” Davis needed a replacement for his combo in 1955, she was hired. The group recorded frequently, one album including a hit blues track, In The Kitchen. Davis talked up Scott’s beauty, and hung lights on the organ so the audiences could enjoy the way she played the bass lines on the foot pedals. She was never entirely happy about this gender stereotyping, saying, “All I was interested in was playing”.

Steve Voce’s Independent obit shed light on Scott’s acceptance by other musicians, and her attitude about the highlighting of her gender.

Many people thought that, even though Count Basie and Fats Waller were the first jazz organ players, Shirley Scott was the best. Basie certainly did. In1958 Scott played at the opening night of Count Basie’s Bar in New York and Basie was asked to follow. He refused, pointing at the diminutive figure.”Not after her!”

Apart from her dexterity at the instrument, Shirley Scott made it roar. Her heavy-shouldered swinging belied her small stature. She weighed eight stone.”I guess if I was about five inches taller and had about 15 more pounds in the right places, it wouldn’t hurt. But I prefer people to listen to what I have to offer rather than ask, ‘What does she have on? Does she have big boobs? Does she have a big butt?’ ” Scott moved easily in the harmonies of Bebop and combined them in an unusually rhythmic style that made much use of blues and gospel music.

Since I never got the chance to see/hear her play live, I am, once again, grateful for the existence of YouTube and the jazz fans who upload great music.

This was one of our Jazz Organ Tributes from the San Francisco Jazz Festival.  Shirley Scott had not played in San Francisco in thirty years!  I also had Jack McDuff and Duke Jethro on the bill. Here Shirley plays with tenor saxophonist Scott E-Dog Petersen and drummer Eddie Marshall. This was November 3, 1996.

Lest you think women playing the jazz organ is a thing of the past, check out Barbara Dennerlein and Rhoda Scott jammin’ in Switzerland in 2002 at the Bern Jazz Festival.

That just got me up on my feet, dancing around the room and applauding!

I’ll see you in the comments section for lots more soul-jazz organ music and organists.