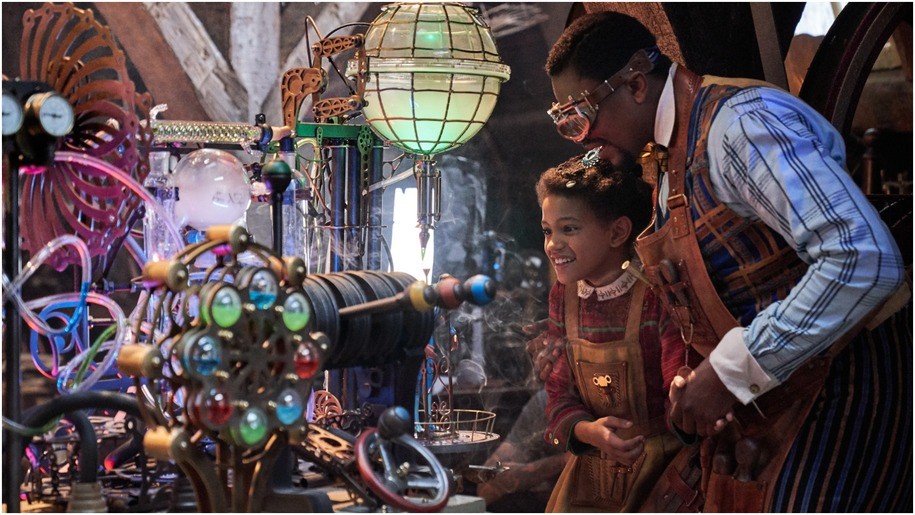 An animated short film starring a Black character was released earlier this month on Netflix. And while it appears media outlets are pretending this is something that happens every day, as a mom of two, I know it does not. Finding children’s programming with people of color in a variety of roles has been a struggle of mine. If you’re living the struggle too, former Pixar animator Frank E. Abney III’s “Canvas” and playwright David E. Talbert’s “Jingle Jangle: A Christmas Journey” do not disappoint.

At nine minutes, “Canvas” is a short and exceptionally sweet film. It features a grandfather’s journey back to painting after he suffered a heartbreaking loss. Abney told Variety magazine he came up with the idea about six years ago. “I was having a rough patch creatively, trying to navigate in the industry and find my place in all of it,” he said. His nieces helped him through it. “They navigate the world without having the burden of things that we have on our shoulders as adults. It really inspired me to create something,” Abney said.

He also told the magazine he wanted to create something that featured Black characters. “Highlighting Black characters was a big one for me, because growing up I didn’t really see that many cartoons or movies that had main characters that were Black, that I could identify with,” Abney said. “As a Black animator, a Black director, I feel like that’s part of my responsibility to get that representation out there. And then to have a studio like Netflix respond to that, just on the characters alone, it was really refreshing and inspiring as well. It put some more wind in our sails to continue on it.”

Talbert was similarly inspired to create “Jingle Jangle.” He told IndieWire, a website dedicated to reviewing independent films, he realized a disconnect when he showed his 4-year-old “Chitty Chitty Bang Bang,” a 1968 musical film, for the first time in 2017. “I sat with him and I’m singing the songs and everything, and he just wasn’t into it at all, and asked if he could go play with his LEGOs,” Talbert told the website. “As he walked away, I looked at him, I looked at the screen, and I realized, he doesn’t see himself in the film. But this was my childhood, because there were no other options for diversity of representation on the screen at the time.

“He has Black Panther and Miles Morales on his wall. So that’s when I thought, it’s time to do it, because if my son is experiencing this, how many sons and daughters of color, around the world want to see themselves represented as well?”

Netflix described the film as a “musical adventure and a visual spectacle for the ages”:

“Set in the gloriously vibrant town of Cobbleton, the film follows legendary toymaker Jeronicus Jangle (Academy Award winner Forest Whitaker) whose fanciful inventions burst with whimsy and wonder. But when his trusted apprentice (Emmy winner Keegan-Michael Key) steals his most prized creation, it’s up to his equally bright and inventive granddaughter (newcomer Madalen Mills) — and a long-forgotten invention — to heal old wounds and reawaken the magic within. From the imagination of writer-director David E. Talbert, Jingle Jangle: A Christmas Journey reminds us of the strength of family and the power of possibility.  Featuring original songs by John Legend, Philip Lawrence, Davy Nathan, and “This Day” performed by Usher and Kiana Ledé.”

So this is what the black people were doing in the period movies I never see them in… off being Great…! #JingleJangle #FirstWatch pic.twitter.com/pawzwMNQCk

That moment when your 8 year old realizes Jessica is the voice of Princess Tiana. #JingleJangle pic.twitter.com/yFDuvVC9vu

And I think I’m the last person in the universe to see #JingleJangle, but I GUSHED on FB last night… …there aren’t enough superlatives. I knew I’d adore it, which is why I was saving it for a year-end treat. But I needed it this weekend when I was sad. Wow, it *delivered.*

If you haven’t watched #JingleJangle yet – I HIGHLY recommend (kids or not). If for nothing else…these costumes & this set design??!? pic.twitter.com/tTxc7McaBS