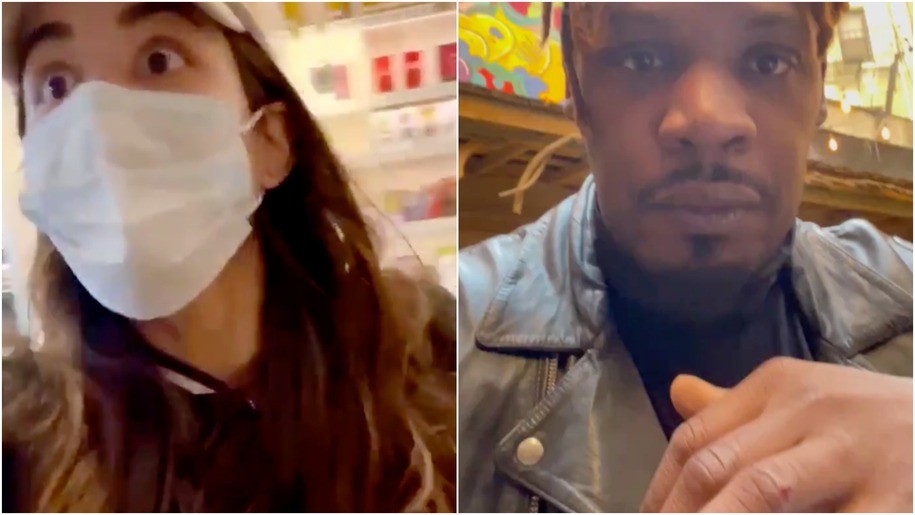 A woman shown on video attacking the teen son of Grammy Award-winning trumpeter Keyon Harrold apparently has a history of drunken encounters, two of which landed her in jail. Unnamed police sources identified that woman Thursday as Miya Ponsetto, a 22-year-old former cheerleader at Simi Valley High School in California, according to New York Daily News. Miya and her mother, Nicole, were arrested in February after they allegedly caused a disturbance and refused to leave the Peninsula Hotel in Beverly Hills, TMZ reported. Law enforcement officials told the entertainment news site that when the cops arrived, Nicole pushed and kicked a cop and her daughter appeared drunk. The mother-daughter pair was charged with public intoxication, and Nicole picked up the additional charge of battery on a police officer, TMZ reported.

The arrests obviously didn’t make much of an impression on the younger Ponsetto though. She was charged in the incident on May 27, 2020 and arrested the next day on a drunk driving charge, TMZ reported. She ended up getting out of that scenario with a no-contest plea, 30 hours of community service, a nine-month alcohol and drug counseling program, and three years of probation. Miya didn’t seem to mention her past arrests when she played victim in a phone interview with CNN Tuesday, but my guess is that attacking a child on camera would be a violation of her parole.

Miya told CNN her encounter with the teenager started with her demand to see hotel surveillance video to find her phone. She then asked another person in the lobby to “empty their pocket” before turning her attention to the child, Keyon Harrold Jr. “That’s when everything got a little bit more serious,” she told CNN. She claimed she was assaulted but provided no proof, and she said she would cooperate with the police but that NYPD hadn’t called her. “Of course I worry. That’s not who I am,” she told CNN. “I actually … try very hard to make sure that I am always doing the right thing.”

CNN described Miya in the  20-minute interview as “rambling,” noting she went into details “unrelated to the incident” that the network “has been unable to confirm.” It ultimately chose not to identify Miya in its report, citing “concerns for her safety unrelated to this incident.” More than 50,000 Twitter users liked a tweet criticizing the cable news network for failing to identify Miya. “LETS TRY THIS AGAIN!!! CNN is withholding her name but felt no remorse in telling everyone a falsely accused black teenagers name,” Twitter user @lulnesser tweeted Thursday.

LETS TRY THIS AGAIN!!! CNN is withholding her name but felt no remorse in telling everyone a falsely accused black teenagers name. Her name is Miya Ponsetto and lives Simi Valley! She has 2 arrests on her record and she looks like this👇🏽 Yea idgaf im doing them how they do us💯 https://t.co/e9Zcxvk5JS pic.twitter.com/TvyQHn3tTX

Chief of Detectives Rodney Harrison has asked for the public’s help in locating Miya. “On Saturday, December 26, the woman in this video falsely accused an innocent 14-year-old teenager of stealing her cellphone,” he tweeted. “She then proceeded to physically attack him and fled the location before police officers arrived on scene.”

The @NYPDnews is requesting the public’s assistance locating the suspect in this video.    Anyone with information in regard to the suspect’s whereabouts is asked to call the NYPD’s Crime Stoppers Hotline at 800-577-TIPS(8477) or DM @NYPDTips

Danny Frost, a spokesman with the district attorney’s office, said in a statement emailed to Daily Kos Tuesday that he can’t name the woman due to a policy preventing the office from identifying individuals who have not been charged. “Our office is thoroughly investigating this incident,” Frost said.

Video the senior Harrold shared on social media showed Miya repeatedly demand that the father make his teen show her his phone to prove it was his. “No he’s not leaving,” she said.

“Are you kidding me? You feel like there’s only one iPhone made in the world?” Harrold asked her. “No OK then show me the, show me the…” the woman started to interrupt. “No,” Harrold responded. “Get a life. You better go use Find My iPhone.” She ultimately did find her phone when an Uber driver later returned it, the musician said in an Instagram post last month.

He’s no stranger to racism. Keyon Harrold is from Ferguson, Missouri, the St. Louis suburb that 18-year-old Michael Brown was shot and killed in, he said at a news conference Wednesday. Despite the common narrative that Brown, a Black man, was suspected of robbing a convenience store, officers admitted they had no knowledge Brown was a robbery suspect and had only stopped him for walking in the street when a white cop shot Brown at least six times on Aug. 9, 2014.
YouTube Video
Harrold said standing near Rev. Al Sharpton that the hotel incident could have ended “wrongly” if his son wasn’t there. “I want my son to grow up whole. That’s all we want. … I come from Ferguson and this has been my passport to the world,” the father said, gesturing to his trumpet. “And I can’t even come downstairs in New York City … and just go get brunch without being attacked and wrongfully accused of something.” Kat Rodriguez, the child’s mother and a Grammy-nominated saxophonist herself, called for the woman later identified as Miya Ponsetto to be charged with assault. “This fight is not only for our son. It’s for all of our sons and daughters,” she said. “If we were a family that didn’t have these connections … if I was a maid, this story wouldn’t have hit the news. What about those people that don’t get to get heard?”
Keyon Harrold Jr. told ABC News he’s been “alright” although “confused” and “kind of shellshocked.” ”I mean I don’t know what would have happened if my dad wasn’t there honestly,” he said.
YouTube Video

Mayor Bill de Blasio condemned Miya’s behavior on Twitter Thursday. “This is racism. Plain and simple,” he tweeted. “It would be horrific at any age, but it’s especially offensive that it happened to a child. To Keyon Harrold Jr. and his family: I am so sorry this happened to you. Her behavior was an affront to our city’s values.”

Keyon Harrold’s rendition of America the Beautiful soared above City Hall today and called us all to common purpose. To @TheRevAl and all who stood with the Harrold family today: thank you. The NYPD is working with the Manhattan DA to ensure justice will be done. pic.twitter.com/lAxQGMTGqg

RELATED: ‘He is a child!!!’ Teen son of Grammy Award-winning trumpeter wrongfully accused of stealing

The Georgia runoff is Jan. 5. Let’s give GOP Leader Mitch McConnell the boot! Give $4 right now so McConnell can suffer the next six years in the minority.