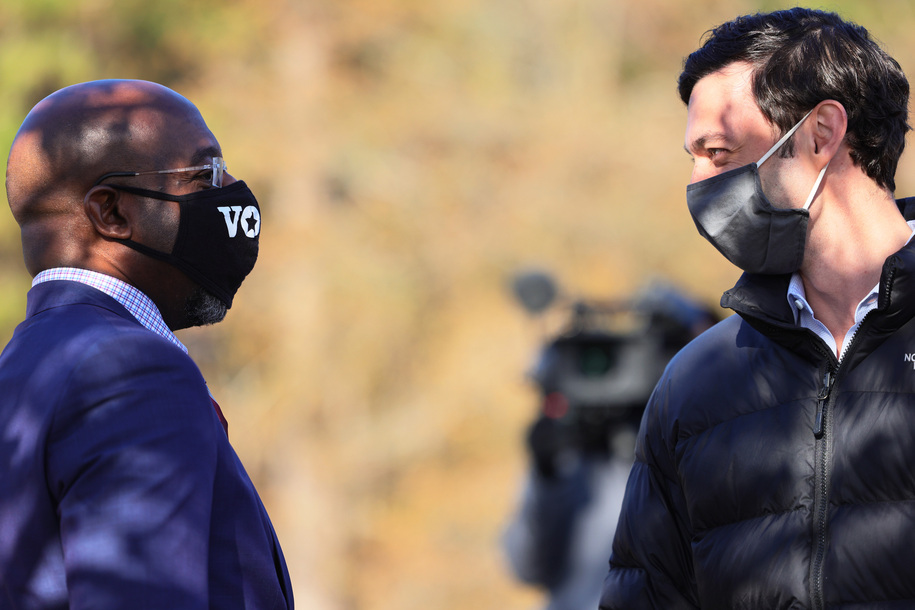 The polling says the runoff races for the two Senate seats in Georgia are tied, and if the polls don’t say that, they’re likely wrong. We don’t need a poll to tell us what we just saw weeks ago in the November general election: Georgia is balanced on a razor’s edge, and the victor will be the party that best gets its voters to the polls. How’s that for a hot take?

But of course Georgia has been voting for weeks, and as such, we have some hints as to what’s coming when the votes are counted.

It should go without saying that there are big wild cards in play, and we really don’t know anything with certainty. Will we win or lose? Who knows! Either way it’ll be painfully close, and odds are we have weeks of litigation ahead of us either way.

The biggest wild card, of course, is the Trump-only voter, or as I like to call them, the Hidden Deplorables. It’s a small sample size, but in the last four years, they’ve only shown up at the polls when sore loser Donald Trump is on the ballot. Not only is he not on the ballot in these runoff elections, but he’s made Georgia Ground Zero for his efforts to stage an undemocratic coup and overturn the presidential election results. As he told Georgia’s Republican Secretary of State Brad Raffensperger in his mob shakedown call this weekend, Trump’s people might not turn out if the results weren’t flipped.

Trump: And a lot of Republicans are going to vote negative because they hate what you did to the president. Okay? They hate it. And they’re going to vote. And you would be respected. Really respected, if this thing could be straightened out before the election. You have a big election coming up on Tuesday. And I think that it is really is important that you meet tomorrow and work out on these numbers […] As the Georgia politicians say, there is no way you lost Georgia. Nobody. Everyone knows I won it by hundreds of thousands of votes. But I’ll tell you it’s going to have a big impact on Tuesday if you guys don’t get this thing straightened out fast. [Emphasis mine.]

Aside from the mystery over what “voting negative” means, the implication is clear: Steal the election for Trump or Tuesday’s Republican vote will be impacted.

Furthermore, it’s clear that Trump doesn’t give a rat’s ass about the runoff elections. His first campaign visit to the state last month was an excuse to play to his adoring crowds, and he gave the two Senate candidates comically little time to speak to the crowd (and the crowd didn’t want to hear them anyway). And it’s not as if Trump used his time to talk up the Senate candidates, either. It was an airing of grievances, same as today when he visits the state one more time.

So Trump, obsessed with his flailing coup attempt, hasn’t helped and isn’t helping now. Does that mean his people won’t turn out tomorrow? Who knows! We should assume they will, but if they don’t, it’s game over for the GOP.

This thread by Ryan Anderson, the mastermind behind the amazing GeorgiaVotes.com site, is a great start. But here is the bottom line:

So, with that said, what would the numbers say: Democrats have a lead of between 170,409 (using Ossoff/Perdue) and 244,819 (using Biden/Trump results), so in the range of 6-8% lead for the Democrats. But this is just one data point. We can look at some more.

One of the interesting data points that Anderson notes is that while Republican turnout is lagging behind Democratic turnout, they’ve actually cannibalized more of their Election Day vote than Republicans. Given that Republicans have put most of their eggs in the Election Day vote basket, losing some of that reliable vote to early voting could portend trouble. Or maybe not! (I really want to stress just how speculative all of this is!)

Now, where is this lead coming from? Let’s take a look at the final composition of the early vote:

The “no-primary” results show that casual and maybe third-party libertarian-type voters are dropping off. Republicans have kept up their general election levels, but astonishingly, Democrats are over five points higher. Those race numbers also look fantastic for Democrats as a strong Black turnout was a prerequisite for victory. Look at the Georgia exit polling on race:

Yup, less than a third of Georgia whites voted for Biden. So a nearly two-point drop-off in white turnout with a 2.7-point boost among Black performance is great news for Team Blue.

The warning sign is the age breakdowns. Again, from the exit polls:

These numbers aren’t as lopsided as the race ones, so less impactful. But also, we don’t know which older Georgians are voting at higher rates. It could be rural Black elderly Georgians! But if I’m a Republican, I’m hanging my hopes on those numbers.

Remember, Joe Biden won the state by 11,000 votes. It’s all but tied. So these shifts might seems small and marginal—a point here, three points there. But when the baseline is 50-50, every single one of those shifts is meaningful.

So while the white vote is down, it would be helpful to know which white vote is down. This analysis from late December came a few days before the end of the early voting period, but I doubt the overall dynamics changed much in the end:

According to Bonier’s data, the drop-off in the white vote is all non-college white. And take a look at why this matters, from the exit polls:

Black vote is up, white non-college vote is down, and Democratic areas are overperforming compared Republican ones.

African American voters account for 40.2% of the 112,886 Georgians who have voted in the runoff, but didn’t vote in the general election. 32.3% of registered voters in the state are African American.

For context, about 5 million votes were cast in Georgia in November, so this brand new vote is about 2.2% of that total. Again, not a lot, but we’re talking about scrapping and clawing for every single possible vote. Democrats have focused heavily on this new vote. I’m too lazy to look up the exact number right now, but something like 40,000 Georgians were turning 18 between the general and runoff elections. Democrats had a program to identify, register, and turn out those young voters. 113,000 brand new voters is a fantastic sign, particularly since most of the non-performing vote has been our own core demographics (younger, browner, more single). Tom Bonier’s numbers in the tweets above show that those Democratic efforts have paid dividends—both in turning out new young voters and in turning out Black voters who have to be jazzed at the idea of Rev. Raphael Warnock possibly representing them in the Senate.

Ah, this is the ballgame. It’s pretty clear Democrats are crushing the early vote, but Democrats were always expected to win the early vote. Trump has done such a great job trashing early voting that it has conditioned his party to focus on Election Day turnout. It’s a risky strategy—voters can die, the weather can turn, news events (like a taped effort to overturn your state’s elections) can impact voter choices. But it is what it is, and Republicans have always expressed confidence that they’ll make up whatever early vote deficit exists. It helps that their voters don’t have to deal with voter suppression issues like eight-hour lines at the polls.

So exactly what kind of turnout do Republicans need to overcome their current deficit? Nate Cohn runs some numbers in this thread.

There’s some fuzziness on any estimate like this, of course. But the fundamentals here are pretty straightforward, and clear to anyone with a voter file, based on the partisan makeup of the vote and the vigorous Black turnout. It’s confirmed in our NYT/Siena poll data as well

That 350,000 number is much higher than Ryan Anderson’s 245,000 above, which again shows you just how much this is art instead of precision science. Could it be explained by the 100,000 outstanding absentees in the mail? Maybe. Just realize this is all fuzzy.

So now Perdue would need 350k votes to fight back to a tie. What would that look like? Well it would entail something more than Nov., when he won by 218k votes on Election Day with nearly 62% of the mjr vote. Of course, the strong Dem turnout means there are more GOPers left now

This is quite the challenge for the GOP; even if we use Ryan Anderson’s 245,000 number, that is still higher than the GOP’s November Election Day net … with Trump on the ticket.

Cohn says there are more Republicans on the sidelines right now, so it’s technically possible, but note that Republicans have actually cannibalized more of their Election Day vote than Republicans!

Again, the numbers are small: 3% of November Election Day-voting Republicans have voted early this time around. But as I keep noting, in a close election these tiny margins could prove the difference. And given the size of the (potential) gap, it makes the GOP’s job that much more difficult. Not that they won’t try.

So that’s a lot of tea leaves, and they say that things are cautiously optimistic for our Democrats, but the Republican vote will all come out tomorrow. Will it turn out in numbers that overcome the Democratic advantage? Will Trump’s vote turn out? Will Democrats find even more voters and get them to the polls?

Oh, and one final note:

Just a reminder as we head into Election Day v2 in Georgia – Biden didn’t take the lead in the reported vote count until more than 48 hours after polls closed. It’s going to take time to count the votes, and these races will be close.