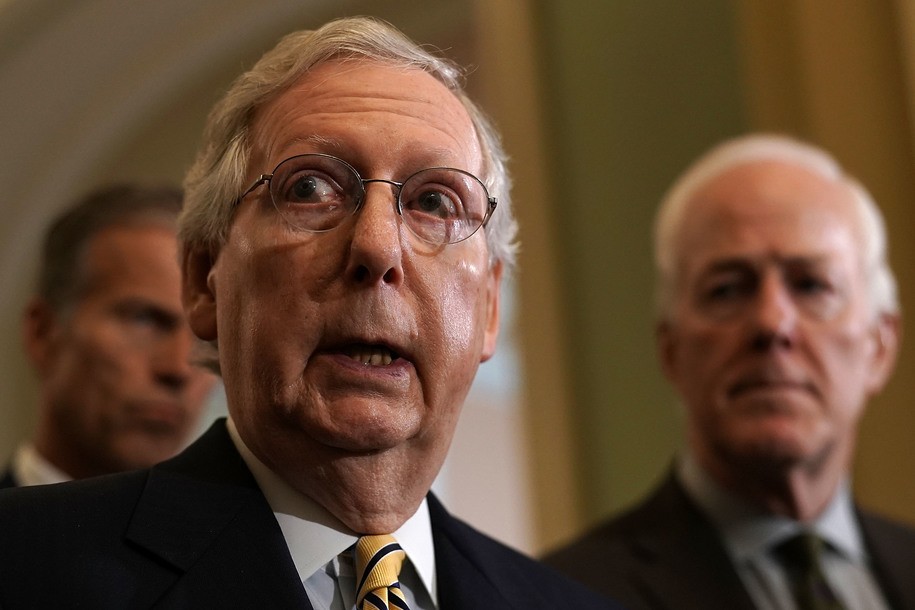 Senate GOP Leader Mitch McConnell’s Faustian bargain with Donald Trump is backfiring in spectacular fashion as his Senate caucus descends into bitter internecine warfare over whether to back Trump’s seditious effort to overturn the presidential election results.

That intra-party battle spilling into public view is how Republicans kicked off the 117th Congress. As House Democrats narrowly reelected Nancy Pelosi as Speaker Sunday, McConnell lost grip on the caucus he had marshaled nearly a year earlier to clear Trump of impeachment charges against the backdrop of a mountain of evidence Senate Republicans ultimately dismissed without hearing from a single witness. That blind fealty helped assure Trump that no matter what action he took—however reckless, illegal, or traitorous—he would never pay a price for it. And so when Trump lost the presidential election, he decided yet again that making a bid to steal it would be both perfectly in order and without consequence.

So McConnell and congressional Republicans once again stood by Trump for over a month, declaring repeatedly that he had every right to try to overturn the results of an election that was secure, fair, and devoid of fraud. The longer Trump’s baseless effort continued, the more bogus it was shown to be through a series of endless losses in both state and federal courtrooms. But when states across the nation finally certified their results rendering Trump the loser, McConnell figured he could just flip the switch, reluctantly embrace the results, and leave Trump in the rearview mirror.

Not so fast. The monster McConnell nurtured over the last four years with the help of his fellow Republicans has turned on him. Despite his repeated pleas for Senate Republicans to leave Trump for dead when Congress certifies the election results in a joint session Wednesday, the lure of personal ambition proved too powerful for the greater good of the GOP caucus. After Sen. Josh Hawley of Missouri announced with the gleam of 2024 in his eyes that he would challenge the results during certification, Sen. Ted Cruz of Texas suddenly wanted a piece of the action too. Now about a dozen Senate Republicans—all hoping to ingratiate themselves with Trump’s cultists to boost their own political star—have jumped on board the Trump’s sedition train. As Joan McCarter notes, that pro-fascist coup faction represents a quarter of the Senate Republican caucus.

At the other end of the spectrum, several of their GOP colleagues have spoken out forcefully against the largely symbolic, politically expedient, and certainly futile effort—which will ultimately be shot down in the Democrat-controlled House. Sen. Pat Toomey of Pennsylvania, who notably isn’t running for reelection in 2022, blasted Hawley and Cruz by name in a statement for trying to undermine “the right of the people to elect their own leaders.”

On Wednesday, Toomey said, “I intend to vigorously defend our form of government by opposing this effort to disenfranchise millions of voters in my state and others.”

Sen. Mitt Romney of Utah, who has regularly marched to the beat of his own drummer in the caucus, also skewered the effort as an “egregious ploy.” And Sen. Ben Sasse, who is no doubt working to burnish his own brand of Republicanism, called the challenge “a very, very, bad idea,” saying he was both “concerned about the division in America” and the health of the Republican Party. “This is bad for the country and bad for the party,” said Sasse, who just secured another six-year Senate term.

Sen. Tom of Cotton of Arkansas, a GOP firebrand also eyeing 2024, turned in a somewhat unusual condemnation of the pro-Trump challenge on constitutional grounds, saying it would “only embolden those Democrats who want to erode further our system of constitutional government.”

Even some Republicans in the House have objected to the Trumpian coup. Rep. Chip Roy of Texas, also a GOP firebrand and one-time aide to Sen. Cruz, forced his GOP colleagues Sunday to vote on whether the House delegations from the states Trump is challenging should be seated since Republicans are claiming widespread systemic fraud took place in those states.

“After all, those representatives were elected through the very same systems—with the same ballot procedures, with the same signature validations, with the same broadly applied decisions of executive and judicial branch officials—as were the electors chosen for the President of the United States under the laws of those states,” Roy said of the House delegations from Arizona, Pennsylvania, Michigan, Wisconsin, and Nevada. Naturally, nearly every one of his GOP voted in favor of seating the delegations, with a vote of 371-2 permitting Pelosi to swear in all the House members from the states Trump is challenging. The two GOP members who voted against it said they simply wanted to debate the matter.

While the whole episode on Wednesday will serve as yet another stain on the entire Republican party, it will at least have the benefit of forcing Senate Republicans to go on the record either backing a bald-faced betrayal of American democracy or risking the wrath of Trump. Neither one of those positions is particularly enviable for the cohort of vulnerable Senate Republicans in 2022. It forces those Senate Republicans to place very early bets on risking the alienation of more moderate suburban voters in order to woo Trump voters who may or may not actually continue to turn out for the Republican party once Trump isn’t on the ticket. Sitting GOP senators such as John Thune of South Dakota are already facing the prospect of attracting primaries from Trump acolytes, which in turn could imperil the GOP’s path to prevailing in subsequent general election contests.

If Senate Republicans had hung together and refused to challenge the election results during this week’s joint session, they all could have started to build a certain amount of insulation from Trumpian politics moving forward. But as it turns out, a craven party that eagerly betrayed the country to achieve its own political ends has only served to embolden its own cohort of craven politicians who are eagerly throwing their colleagues under the bus to serve their own political ends. What comes around, goes around.