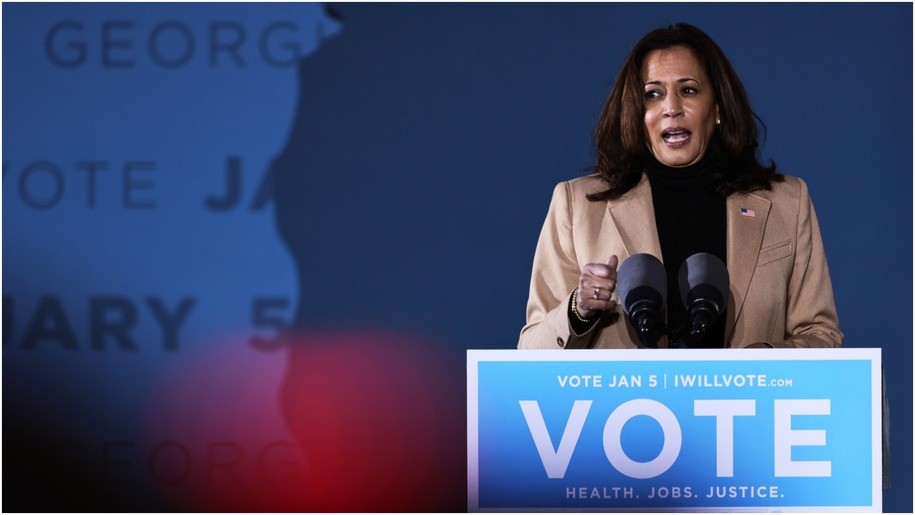 Vice-President-elect Kamala Harris showed up and showed out in support of Democratic Senate hopefuls Jon Ossoff and Raphael Warnock when she made a special trip Sunday to Savannah’s Garden City Stadium for a drive-in rally. In a speech colored with historical references about the late voting rights activist John Lewis, she impressed upon Georgians the importance of voting in the state’s upcoming Senate runoff. She also fit into her talking points the state’s notorious voter suppression efforts costing former Georgia House Minority Leader Stacey Abrams her gubernatorial bid and President Donald Trump’s recent pressure applied to Georgia Secretary of State Brad Raffensperger during a recorded call.

The Georgia runoff is Jan. 5. Let’s give GOP Leader Mitch McConnell the boot! Give $4 right now so McConnell can suffer the next six years in the minority.

“Have you all heard about that recorded conversation,” Harris asked an eager coastal Georgia crowd. A symphony of honking horns followed. “Well, it was yes, certainly the voice of desperation, most certainly that,” Harris said of Trump’s words. “And it was a bald, bald-faced, bold abuse of power by the president of the United States.”

In the recorded call The Washington Post obtained, Trump tried belittling, flattering, begging, and even threatening Raffensperger to delve deeper into the commander in chief’s unsubstantiated claim of vote-rigging costing him the election to President-elect Joe Biden. “So look. All I want to do is this,” Trump can be heard saying. “I just want to find 11,780 votes, which is one more than we have. Because we won the state.” The latest recount conducted by Raffensperger’s office showed the president lost to Biden by 11,779 votes, again solidifying the Republican state’s flip in favor of a Democrat. Trump’s loss in Georgia represents the first of its kind since Georgia voters backed former President Bill Clinton in 1992.

Harris used the facts at play to recommend a question for Georgia voters in the face of the country’s top leader trying to suppress the state’s vote. “Whenever we see this happen, I think it requires not only action, but it requires a question,” Harris said. “Why are such powerful people trying to make it difficult for us to vote? And I think we know the answer. Because they know our power.”

That is the task before us. Us, and in the hands of you as the voters of Georgia to do what is not only in the best interest of the people of this beautiful and great state, but by extension what you will do for people all around the country, for people for whom you may never meet, people who may never know your name. But because of your activism, because of your voice, because of your fight, they will forever benefit, and their lives will forever be better. ‘Cause here’s what I’ma tell you. So I was elected to the United States Senate four years ago, um. It was actually a bittersweet night. It was the same night Donald Trump was elected president, so there you go, but I will tell you I’ve been in the United States Senate now for four years years. I was elected as only the second Black woman in the history of the United States Senate to be in that chamber, [cheering] [horns honking] and I have seen what happens there.

And so part of why I am here in Savannah here today, this Sunday, the Sunday before the Tuesday where you are going to make history. Part of why I am here today is to share with you the experiences I’ve had in the United States Senate, where I have seen that body of 100 people, 100 Americans, make the decisions that impact over 320 million Americans. Those 100 individuals who each have a voice that can change the course of the history of our country. I was there, that late night into the early morning where there was a vote on one of the most significant pieces of public policy and legislation to ever hit our country. Because of President Barack Obama and Vice President Joe Biden, when they passed the Affordable Care Act. That was also called Obamacare. I was there to witness the debates that occurred where people were trying to make politics out of your public health, where they were determined to try to get rid of any accomplishments of the first Black president of the United States and therefore tried to get rid of a healthcare policy that brought healthcare [to] over 20 million people who didn’t have it. Who said we’re going to get rid of the ban on preexisting conditions because people who have diabetes, who have lupus, who have high blood pressure should not be denied coverage because of a preexisting condition. A law that said it is wrong, it is unjust, to charge women more for health care because their bodies were designed to reproduce the human race.

And I was there then on the floor of the United States Senate. It must’ve been 2 o’clock in the morning. It was early morning hours, where the consequence of that most important piece of legislation would be determined. And I witnessed then the power of just one senator in the United States Senate. When the late great John McCain said ‘no you don’t.’ You remember that? You remember that? And Savannah you have a decision to elect two United States senators. That is the power that is in your hands to elect two individuals who are outstanding leaders in Raphael Warnock and Jon Ossoff, and I know them. I have spent time with them. We have talked. We have prayed together. We have talked about the fate of our country, the future of our country, the promise of our country. And they have talked to me about the state of Georgia.

Let’s fast-forward to recent history where we know were there not powerful people trying to mess with folks’ right to vote, we would be talking about Governor Stacey Abrams. [horns honking] Let’s talk about more recent history, when Joe Biden and Kamala Harris were on the ballot, and they were still messing with folks’ right to vote in November, trying to make it difficult, trying to make it confusing, trying to deter people. But the people of Georgia said ‘oh no you don’t. [horns honking] Oh no you don’t.’ The people of Georgia understood, and then look at the most recent history which is that after you elected, you turned Georgia blue. You elected Joe Biden president of the United States. You elected the first Black woman in the history of our country to be the vice president of the United States. [cheering] [horns honking]. And they have the gall to suggest you didn’t know what you were doing. You must have gone about it in a way that was illegitimate, and they filed six lawsuits, not one, not two, six lawsuits trying to challenge your voice in that election. And they failed every time. [cheering] [horns honking] And the people’s voice remains standing. And then, the president of the United States, the current president of the United States called the Senate race in Georgia, this Senate race in Georgia, illegitimate. He called it illegal and invalid. Illegal and invalid, suggesting that the people of Georgia are trying to commit a crime.

And then let’s just fast-forward to most recent history, which is yesterday. Have you all heard about that recorded conversation? [horns honking] Well, it was yes certainly the voice of desperation, most certainly that. And it was a bald, bald-faced, bold abuse of power by the president of the United States. [horns honking] And I raise all that, the people and the leaders of Savannah—because if you’re here right now on this Sunday, New Year’s weekend, two days before the election you are a leader, and I thank you for that— and I raise all this to remind us to ask a question always when we see these powerful people that are trying to make it difficult. Trying to make it confusing. Trying to invalidate our voice.

Whenever we see this happen, I think it requires not only action, but it requires a question. Why are such powerful people trying to make it difficult for us to vote? And I think we know the answer. It’s because they know our power. They know our power. They know when we vote, things change. They know when we vote, we win. [cheering] [horns honking]. So that’s what’s before us yet again and before you the leaders of Georgia, to say that you will not be silenced. You will not be sidelined. Your voice will not be overlooked. That you will fight because you know that when we fight for our country and the legitimacy of our Democracy, we win. [horns honking] We win, [horns honking] and so everything is at stake.

Everything is at stake. When you pull out the votes that are in your community, in your family, in your neighborhood by reminding people of what is at stake, the future of our country will be very much in the mix. When we remind our neighbors and our family members and our friends that the individuals who are elected to the United States Senate each and collectively make decisions about whether we’re going to have a federal minimum wage that’s at least $15 an hour. They will make decisions about whether we will have health care and the expansion of Medicaid in the state of Georgia. They will make decisions about whether we give people a $2,000 check when they have been out of work for months. [horns honking] They will make decisions that are about whether or not they see the people. And in this case, for Jon Ossoff and Raphael Warnock, seeing what they talk to me about when they say, “Kamala, you need to know that here in the state of Georgia one in seven families are describing hunger in their household. One in six families are having a difficult time on an inability to pay rent. One in four small businesses is about to go out of business or has gone out of business.”

And you will make a decision about who is holding these most powerful positions that will chart the course of Georgian families and families all around our country. So I’m here to thank you on behalf of Joe and myself for what you did in November, and I’m here to ask you to do it again. [cheering] [horns honking] And I’m just gonna, I’m just gonna remind us all, you know, these are moments when we see these great challenges that do challenge also our faith. And it requires us to dig deep, and it requires us to also see, to see in our hearts and in our minds what is possible, what can be, unburdened by what has been. And this is one of those moments, and this moment, Savannah, this moment will pass. And years from now our children, our grandchildren, and others, they will look in our eyes, each one of us, and they will ask us “where were you at that moment?” And what I know is that we will be able to respond by telling them so much more than just how we felt at this moment. We will tell them what we did. [cheering] We will tell them what we did. We will tell them we will be hanging out of the Garden City Stadium with Kamala, and Jon, and Raphael.