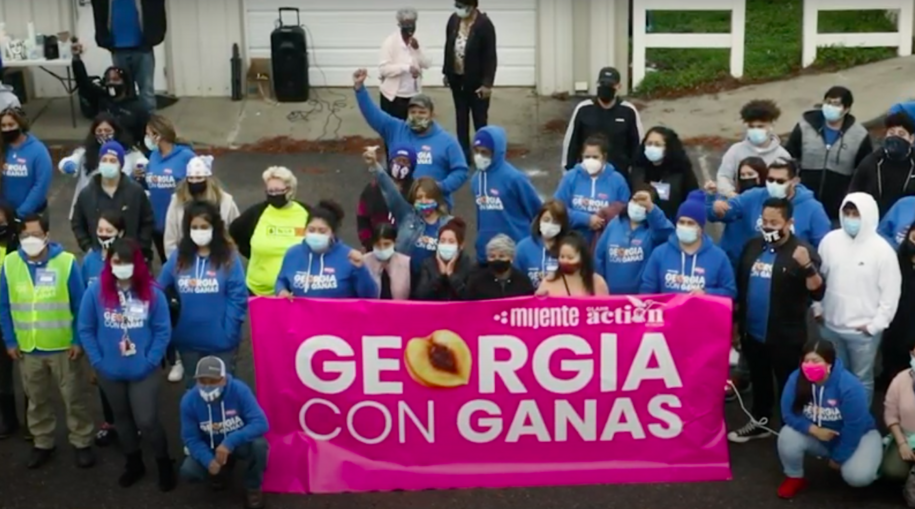 More than 3 million Georgians have already voted ahead of Tuesday’s Senate runoffs. That number includes Latino voters, who have already turned out in record-breaking numbers for the demographic in a runoff race, NBC News reports. “65% of Georgia Latinos who voted early in November voted early in Tuesday’s runoffs—compared to 10% who voted in a 2018 runoff, political scientist says.”

AL DÍA reports that organizers who have been on the ground to elect Democrats Raphael Warnock and Jon Ossoff to the U.S. Senate have been working to mobilize the state’s estimated 300,000 eligible Latino voters for a repeat of Arizona in 2020, when the voters helped flip for the first time in over two decades. Grassroots activists have been working their asses off in Georgia: advocacy group Mijente has contacted every Latino voter in the state. Yes, every single Latino voter.

“The historic work to mobilize Latinx voters in Georgia is rooted in decades of community organizing around the state,” Mijente said in a video shared by founding member and former Bernie Sanders organizer Rafael Návar. In the clip, an organizer with Georgia Latino Alliance for Human Rights (GLAHR) explained that early work began by visiting rural areas of the state, visiting pool halls and laundromats, sometimes “sleeping wherever you could.”

“The work has been happening for more than 20 years, and it hasn’t been easy at all, and it means opening up a space for those communities that don’t have a voice,” the organizer continued. “Through the creation and formation of Mijente, we opened up an electoral space that hadn’t yet been created in our communities. This electoral work is fundamentally based in the work of community organizing.”

“Organizations like Mijente and Mi Familia Vota, to name a few, that are run by Latinx leaders who know the issues most at stake,” AL DÍA reported. “Until the last moment, they make connections with communities by making phone calls, recruiting volunteers and going door-to-door. Many take inspiration from Stacey Abrams and the voter registration movement she led in Georgia ahead of the presidential election.”

“This is our home, and it’s our right to participate and to define our future,” Latino Community Fund executive director Gigi Pedraza told NBC News.

This week will reveal whether the efforts have been enough to have Georgia follow in the path of Arizona, where advocates and groups including LUCHA Arizona and Mi Familia Vota knocked on nearly 1.5 million doors, made nearly 20 million phone calls, and registered nearly 185,000 people to get out and vote. Native voters were also critical in helping turn the state blue and elect Democrat Mark Kelly to the U.S. Senate. Following Kelly’s swearing in, Arizona is now represented in the U.S. Senate by two Democrats for the first time in nearly 70 years.

NBC News reports that in Georgia, leaders like former 2020 presidential candidate Julián Castro have been campaigning for Warnock and Ossoff, with actors and activists like America Ferrera, Eva Longoria, and Mexican actress Kate del Castillo also working to mobilize Latino voters. “¡Sal y vota, tienes el poder!” she said in a tweet shared by Mijente. “Get out and vote, you have the power!”

We are here to help–look for us in yellow for voting info and interpretation assistance at a polling location near you! #GASenate #VamosGeorgia #VotoLatino pic.twitter.com/RDbEjIfSX5

Organizers with Mijente said in a series of tweets that they’re also on the ground today to help Latino voters get to the polls. Of course, we can probably expect some shenanigans from anti-democracy Republicans. My colleague Laura Clawson wrote that they’ve “long worked to make it harder to vote in the state, especially for Black voters. Voting is happening in Georgia, which has historically meant long lines in areas with a lot of Black voters—that’s something to watch for once again.”