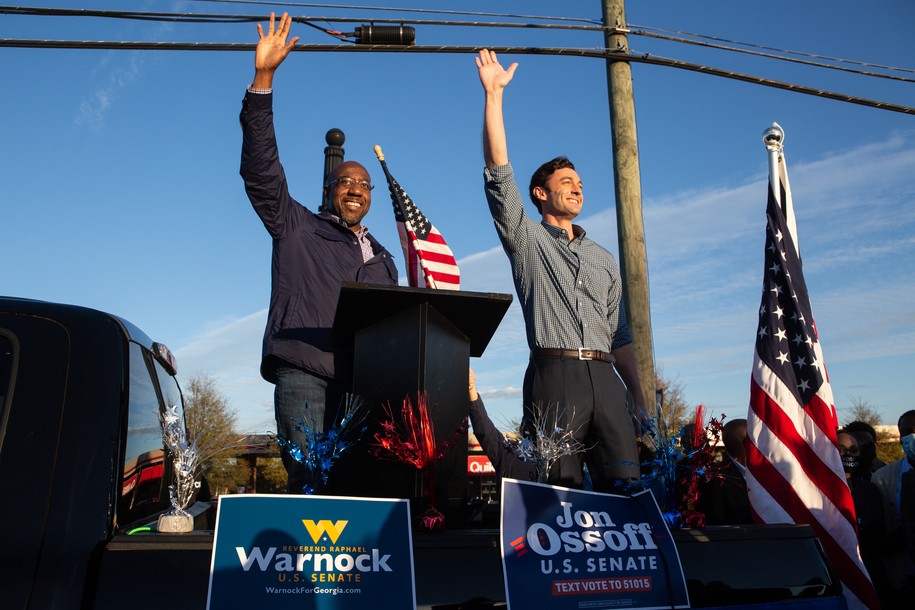 It’s very unusual to see a non-November election that is for all the marbles, but that’s what’s on tap on Tuesday in the two Senate runoff elections in Georgia. If Democratic candidates Jon Ossoff and Rev. Raphael Warnock both manage to defeat their Republican opponents, the Democratic Party will have a Senate majority (thanks to Kamala Harris’ tiebreaking vote), and along with Joe Biden and a Democratic-controlled House, a governing trifecta. If either or both lose, Mitch McConnell will retain control of the Senate and will be able to block not just Biden’s legislative agenda but his judicial nominations and even his cabinet appointments. No pressure, then, right?

The two Senate contests in November were very close, as was, of course, the presidential race in Georgia, which Biden narrowly won. Georgia has a unique law requiring a runoff in races where no candidate tops 50% (excluding presidential elections), and in neither Senate race, no one did, so here we are.

To help you follow along with Tuesday’s results, we’ve put together a fresh set of benchmarks in key counties that will show you whether the Democratic candidates are on track to hit 50%. This time, however, we’re featuring two alternate models—one based on the November presidential results, and the other based on the results from the first round of the Ossoff-Perdue race—that offer slightly different paths to victory.

These benchmarks can help you identify which of Georgia’s 159 counties—most of which are very small—are the ones you need to watch. We’ve included only those that accounted for 2% or more of the statewide vote in November—nine in total. Their share of the vote can be found in the first column, after the list of county names.

Just to the right, you’ll see what numbers Ossoff and Warnock need to hit in each of these counties to notch the narrowest of wins, assuming that each county’s vote share remains stable (a big “if”—more on that in a bit). Those targets are based on Biden’s November performance, which is listed in the next column.

As you can see, the Senate targets are almost identical to Biden’s numbers, since he of course just won exactly the type of squeaker that these benchmarks are designed around. The only adjustment we’ve made is on account of the fact there are only two candidates in each Senate runoff. (Libertarian presidential candidate Jo Jorgenson’s 1.2% in November allowed Biden to win with a 49.5% plurality, something that isn’t possible in a two-person race, so we’ve nudged the Democrats’ benchmarks just a tick higher across the board.)

Normally we compile these benchmarks based on recent presidential results, but because this is a runoff, we actually have another election we can model off of: the first round of the Ossoff-Perdue race. (We did the same thing for Louisiana’s gubernatorial runoff in 2019.) We’ve chosen that matchup simply because it closely resembles the two runoffs, with the only difference being the presence of Libertarian Shane Hazel, whose 2.3% share forced a second round. The special election, meanwhile, involved a whopping 20 candidates in November, which creates the possibility of quirkier data, even if you consolidate the vote by party.

But why offer a second model at all? Even if the toplines look similar, every race has its unique characteristics: Different candidates might appeal more or less to different coalitions of voters, or might have different pockets of regional strength within a state, so it’s good to experiment when possible with a variety of perspectives. Ultimately, the differences don’t look dramatic, as you can see by comparing the fourth column of numbers with the second. That’s not surprising, since Biden and Ossoff largely drew from the same pools of voters in their two races and there just wasn’t much ticket-splitting.

There were enough crossover votes, however, such that Ossoff underperformed Biden by around 1.5 points; Perdue ran ahead of Ossoff by a 49.7-48.0 margin, which contrasts with Biden’s 49.5-49.3 win. This small underperformance was largely uniform across the full variety of counties. Where it was most notable, though, was in the state’s most affluent suburban counties, like Cobb and Forsyth to the north of Atlanta.

While many explanations are possible, these historically red areas may be home to disproportionate numbers of never-Trump Republicans who may have been the most likely to vote for Biden as a rebuke to Donald Trump while also casting ballots for the less obviously objectionable Perdue. Interestingly, a similar dropoff also took place in Fulton County, where most of the Black-majority city of Atlanta is found. However, Fulton also has some of the state’s wealthiest suburbs at its northern end, so the same pattern may apply there as well.

One path forward for Ossoff and Warnock, therefore, involves doing a bit better with these ostensible ticket-splitters, and hoping that some of them might be less enthused about a Republican Senate majority than they were in November. But there are other routes as well. They can, of course, add more Democratic voters who didn’t show up in November. It might be hard to believe that’s possible, given how high turnout was in November, but records indicate that “tens of thousands” of Democrats have done just that.

Alternately, they can win by subtraction, if there’s a dropoff of Republican voters put off by Trump’s attacks on Georgia’s elections, or simply if there are more irregular voters on the GOP side who won’t turn out without Trump on the ballot than there are on the Democratic side who will skip voting without Biden at the top of the ticket.

These benchmarks often prompt a very good question: “Wait, does this stuff actually work?” Well, here’s a good opportunity to look back at our pre-November benchmarks for Georgia (which were based on the 2016 presidential race) and see how they panned out. A quick glance shows that yes, they do! Case in point: We projected that Biden would need to win Fulton County 73-26 in order to barely win Georgia. Biden, it turned out, won Fulton County 73-26 en route to barely winning Georgia.

The most interesting variance between those earlier projections and the actual results comes, again, in the state’s most affluent counties (like Cobb, which is now light blue after decades as a Republican stronghold, and Forsyth, which, while still dark red, is a much less radioactive shade). Biden considerably over-performed his benchmarks in those counties, as well as in Gwinnett—another suburban county that’s more diverse and not quite as affluent as Cobb and Forsyth, but has rapidly shed its Republican leanings in the Trump era.

PROJECTION: WHAT DEMS NEEDED TO BREAK 50%

That leads to the reasonable question of why, since he crushed his benchmarks in the suburbs, Biden didn’t win statewide by more. That question points to one drawback of limiting this table to only the state’s largest counties, which we do to avoid information overload. However, Trump significantly overperformed his 2016 numbers—not only in vote share but especially in turnout—in many of the state’s exurban and rural counties, which individually are small but taken together add up to a big portion of the state.

And that leads us to the other potential pitfall of these benchmarks: A candidate can fall short of their targets in terms of vote share but nevertheless win if turnout surges in the right places. That’s precisely what happened in Kentucky’s 2019 race for governor, when Democrat Andy Beshear ran behind our benchmarks in key urban strongholds but simultaneously saw those counties make up a a far greater than expected proportion of the overall statewide vote.

Something like that is probably less likely to happen Tuesday, but the possibility is still worth bearing in mind as you follow the returns. The most important thing to remember is that results won’t come in uniformly. As we saw in November, Georgia’s big cities were the last to finish reporting their votes, and we’re almost certain to see that again. The earlier-tallied votes are, therefore, once again likely to favor Republicans, and we may well not know the final outcome for several days.