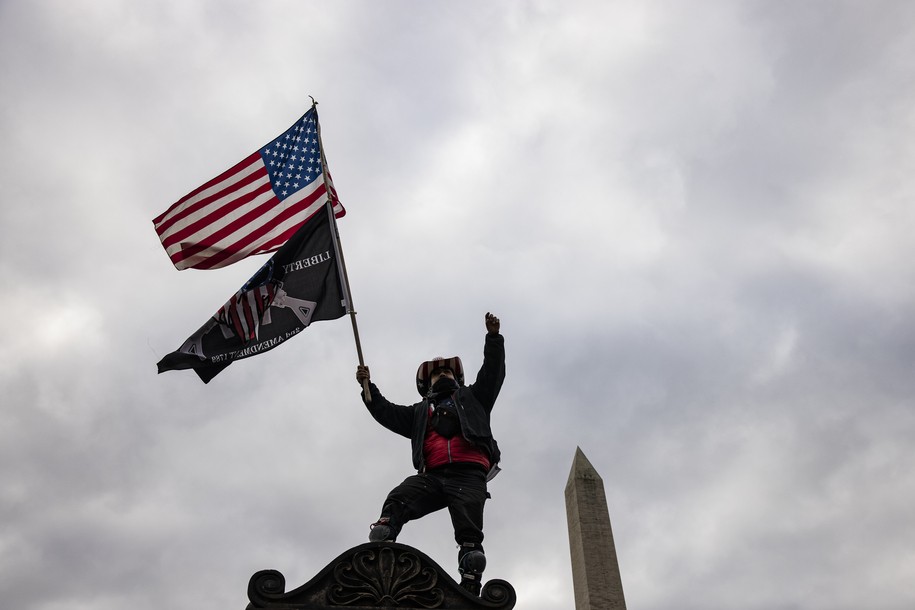 Donald Trump has barely started turning the rally crowd toward the Capitol building, but the white supremacist militias weren’t bothering to attend Trump’s repetition of lies about election fraud. They just went straight to the part about rampaging and pillaging.

BREAKING: Trump supporters have breached the Capitol building, tearing down 4 layers of security fencing and are attempting to occupy the building — fighting federal police who are overrun This is the craziest thing I’ve ever seen in my life. Thousands, police can’t stop them pic.twitter.com/VVdTUwV5YN

The Madison LOC building is being evacuated after Trump supporters breeched security and ran past police.

Militia have not breached the actual Capitol building. After knocking down four layers of security fence, they have, for now, been forced back behind a temporary fence. This is exactly what Donald Trump promised his supporters. And exactly what he wanted.

I don’t know how police can contain this much longer. Capitol Building – Washington, DC#StopTheSteal #DCProtests pic.twitter.com/V05Oc30Mhf

Cannon staffers are being told to take escape hoods, and to go underground to tunnels

28/ Compared to leftist protests I’ve been at, the cops are comparatively chill. They’re not smashing people in the head, and no one’s kettling the Stop the Steal ralliers. They can just turn around and leave at any point. Except…. they’re not doing that.

View from a distance showing several of the fences Trump supporters have knocked down. Notice that some of these supporters are wearing military gear. Unclear if they are armed.

Trump protesters have broken through barriers at the US Capitol pic.twitter.com/9IgXQkGorE

Oh, this can get more disturbing.

They just put up a cross in front of the capitol building pic.twitter.com/0LrGQ5zj9e

Correction: This does not appear to be in D.C., but in Lansing, MI as the pro-Trump protests there are hitting a definite harmony with the nation’s capital.

Look I 100% applaud live coverage from the congressional proceedings today but news really needs to side-by-side with chaos outside. This is madness.

Just evacuated my office in Cannon due to a nearby threat. Now we’re seeing protesters assaulting Capitol Police. This is wrong. This is not who we are. I’m heartbroken for our nation today. pic.twitter.com/jC9P0YfSLQ

The US Capitol is now on lockdown.

Things are getting worse. Possibly much worse.

Moving to another thread.

Whoa: Trump supporters going at it with the police on the steps of the Capitol as Congress counts the Electoral College ballots inside pic.twitter.com/LiQhaa5KkQ

19/ Police are deploying pepper spray and the crowd is pepper-spraying them back. pic.twitter.com/YS0EkM39Vf

Congressional offices have now also been told to evacuate the Cannon building. pic.twitter.com/g1S4ev8bFm

Despite leaving the stage at his rally and promising to march up Pennsylvania Ave to the Capitol, Trump has now returned to the White House by motorcade.

This is unconfirmed, but with all the madness going on at the moment, all too believable.

Hearing that there is a bomb at the Capitol Hill Club. The offices at Cannon House Office Building facing the CHC are being evacuated. Buildings immediately around it are also being evacuated and cars being moved.