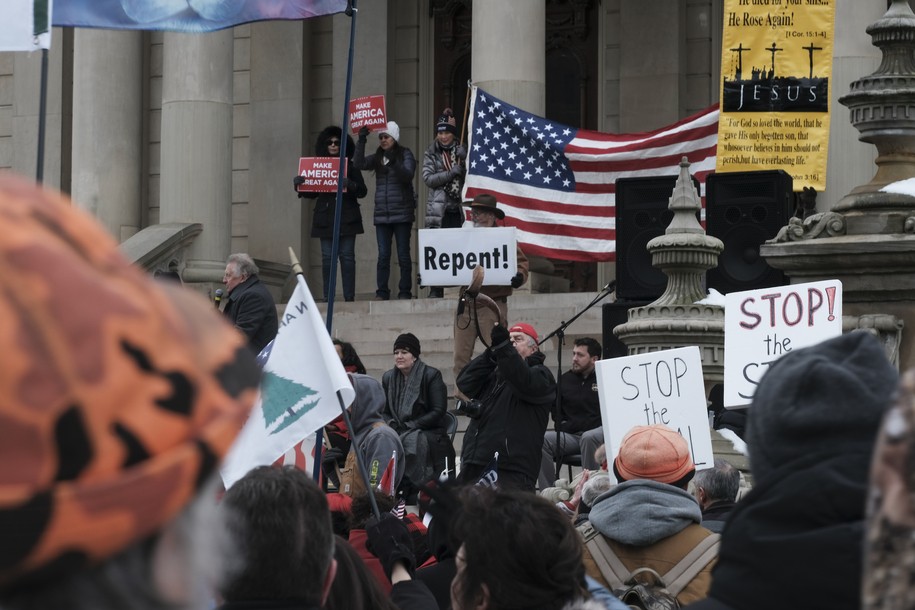 The U.S. Capitol wasn’t the only place violent Trump supporters gathered on Wednesday, though it was by far the most extreme case. In events across the country, Trump supporters falsely convinced that the election had been stolen gathered outside of state capitol buildings and elsewhere in events that local officials and media typically characterized, with palpable relief, as less violent than the Capitol invasion.

People at a pro-Trump event in Salt Lake City, Utah, pepper-sprayed a photographer for The Salt Lake Tribune, told reporters that they were “operatives of the Communist Party [who should be] hung on the spot,” chased a Biden supporter, and tried to start a fight with Black Lives Matter activists. Also, “Some of the Proud Boy and UCA [United Citizens Alarm] members at the protest also menaced a man in a motorcycle helmet, escorted him off the Capitol grounds, carrying bats and guns. They shouted that he was a ‘f—ing commie,’ and yelled at reporters and bystanders watching the scene to ‘stand back,’ at one point even screaming at passing vehicles to ‘drive on!’ And, ‘Go—in case this gets dirty,’” The Salt Lake Tribune reports. But hey, they didn’t storm the state capitol, so the official consensus seems to be that This Is Fine.

In Olympia, Washington, protesters made it through a gate onto the grounds of the governor’s mansion, with law enforcement standing on the porch of the building to keep them away. But hey, they left after half an hour rather than be arrested, so … yay?

There were some arrests in Sacramento, California, for possession of pepper spray, as well as some physical altercations. The New Mexico state capitol was evacuated, and the Texas capitol was closed after the U.S. Capitol was stormed, while hundreds of Trump supporters protested outside. A protest in Lansing, Michigan, was peaceful—and then there was a bomb threat Thursday morning.

The threat was there in the states. The fact that it wasn’t as bad as the historic invasion of the U.S. Capitol should not be used to erase that.