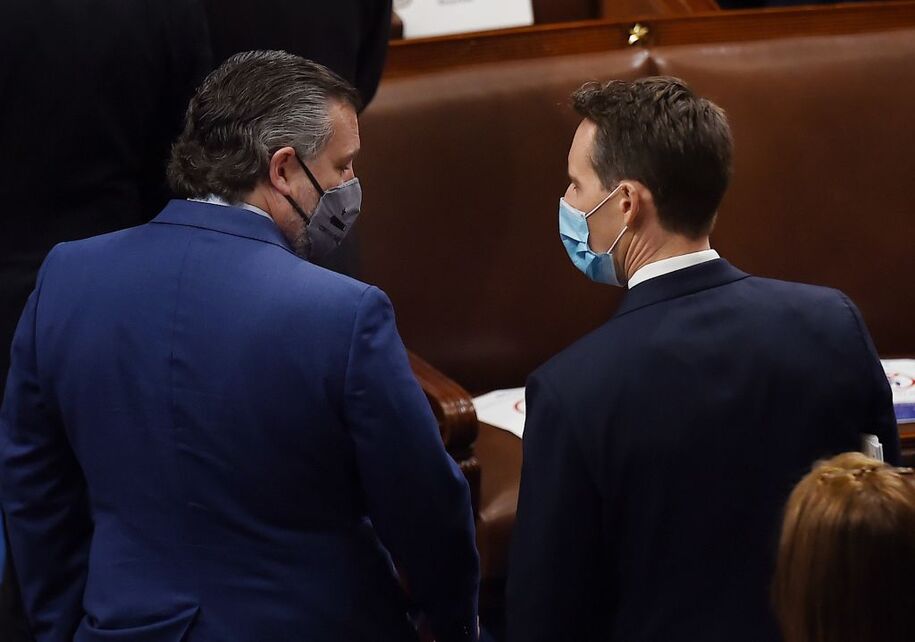 In the opening salvo of their presumed 2024 presidential bids, Republican Sens. Josh Hawley of Missouri and Ted Cruz of Texas jockeyed to claim credit for being the leader of the Sedition caucus—the GOP senators who would band together to oppose congressional certification of the election results.

Hawley was the first GOP senator to take the nearly unprecedented step of announcing he would object to certifying the vote followed by Cruz, who claimed credit for organizing a cohort of their colleagues. By the time Sen. Kelly Loeffler of Georgia erroneously concluded the sedition movement was her ticket to prevailing in her hotly contested runoff, 13 GOP senators had formally announced their intention to back Trump’s reckless and, frankly, treacherous claims that the election was fraudulent.

But after Trump’s armed insurrectionists stormed the U.S. Capitol Wednesday and terrorized lawmakers, Loeffler was also among the first of the Senate Sedition caucus to conclude that going through with her pledge was a fundamental betrayal of U.S. democracy. Plus, she had already lost her election.

“I cannot now in good conscience object to the certification of these electors,” Loeffler said on the Senate floor Wednesday night after the body reconvened. “The violence, the lawlessness and siege of the halls of Congress are abhorrent.”

Loeffler’s no profile in courage, and neither are the other four GOP senators who backed off objecting following the Trump-inspired terrorist attack on the Capitol complex. But their reversal did shine a spotlight on the craven opportunism of the GOP senators who still stood with Trump: Hawley, Cruz, Cindy Hyde-Smith of Mississippi, Cynthia Lummis of Wyoming, John Kennedy of Louisiana, Roger Marshall of Kansas, Rick Scott of Florida, and Tommy Tuberville of Alabama. In case you’re wondering how bright the future of the Senate GOP is, six of those eight senators were elected in the last two years.

But governance aside, Hawley and Cruz likely kneecapped their own presidential bids before they ever got off the ground. Oh, they’ll still try, but it’s hard to imagine them finding a constituency to fuel their bids over the long haul. First of all, if Trump runs (hopefully he’ll be in jail instead), there’s no way they can run after going to the mat to claim 2020 had been stolen from him. The entire base they were appealing to will be sucked up by Trump.

Second, good luck gaining any momentum among moderate-to-conservative-leaning voters who watched in horror as Trump’s terrorists breached the Capitol and overtook the complex. Not only has the Kansas City Star editorial board slammed Hawley for having “blood on his hands,” but Missouri GOP patriarch Jack Danforth issued a stinging rebuke of Hawley’s involvement in the national disgrace:

“Supporting Josh and trying so hard to get him elected to the Senate was the worst mistake I ever made in my life,” Danforth said. “Yesterday was the physical culmination of the long attempt (by Hawley and others) to foment a lack of public confident in our democratic system. It is very dangerous to America to continue pushing this idea that government doesn’t work and that voting was fraudulent.”

Even capitalists are pulling back from Hawley—Simon & Schuster yanked his book deal on Thursday, saying it “cannot support Hawley after his role in what became a dangerous threat to our democracy and freedom.” Hawley shot back on Twitter, “We’ll see you in court.” Hawley is morphing into the likeness of his mentor Donald Trump before our very eyes—spiteful, rage-y, and headed to court.

And a major Missouri GOP donor, David Humphreys, has called for Hawley to be censured. The dual hits from highly influential Republicans Danforth and Humphreys is seismic in Missouri politics.

By Friday morning, the editorial boards of Missouri’s two biggest newspapers, the Post-Dispatch and the Star, were calling on Hawley to resign.

The editorial boards of Missouri’s two major newspapers, the Post-Dispatch and the Star, are both now calling on Josh Hawley to resign 1) https://t.co/Db2fAHUWbU 2) https://t.co/HqVJWoY4Me pic.twitter.com/rZeg8dvfeQ

For his part, Cruz has spent the last 48 hours trying to reverse engineer himself as a voice of reason while Hawley takes the brunt of the blowback.

“Devastating,” Cruz tweeted Thursday night after news of the death a Capitol Police officer injured in the melee. Cruz added that he and his wife were “lifting up in prayer the family” of the officer. Cruz also decided Thursday night was a good time to try to distance himself from Trump’s actions—actions he helped to elevate by, in his own words, “leading the fight to reject electors.”

Good luck, Cruz. Pretty sure people will remember him trying to elbow his way past Hawley to claim leadership of the Sedition caucus.

But on top of the challenges of Cruz and Hawley will have in finding a constituency to fuel any potential presidential bid, their ignominy has only served to elevate the GOP 2024 hopefuls who won’t be burdened by the scarlet “S” for seditionist, as conservative columnist George Will put it. Figures like Sen. Tom Cotton of Arkansas and Ben Sasse of Nebraska will now crow endlessly about their rejection of Trump’s final bid to overthrow the U.S. government. It’s a low bar, but frankly no bar is low enough for the GOP, and Cotton and Sasse have now cleared it.

Finally, Hawley and Cruz didn’t make any friends in their own caucus either, which will impact their ability to show leadership in the Senate. The vast majority of GOP senators didn’t want to take that certification vote because it forced them to choose sides between Trumpism and reality, which will inevitably make their own paths to reelection more difficult. In fact, Mitt Romney got a highly unusual bipartisan ovation on the Senate floor after he rebuked his fellow senators following what he rightly called “an insurrection incited by the president of the United States.”

The usually wooden Romney almost seethed disgust as he shot down the flimsy rationale of the Sedition caucus. “For any who remain insistent on an audit in order to satisfy the many people who believe that the election was stolen, I’d offer this perspective: No congressional audit is ever going to convince these voters, particularly when the president will continue to say the election was stolen,” Romney said. “The best way we can show respect for the voters who were upset is by telling them the truth.”

The GOP—a party overrun by conspiracy—won’t begin telling the truth anytime soon. At present, the party’s very existence relies on the widespread ignorance of its own voters. Nonetheless, sometimes the truth still has the ability to haunt GOP lawmakers, particularly when it’s ugly as it was this week.