At least one of the ‘Zip Tie Guys’ has been identified, and he wants you to know he’s a good guy 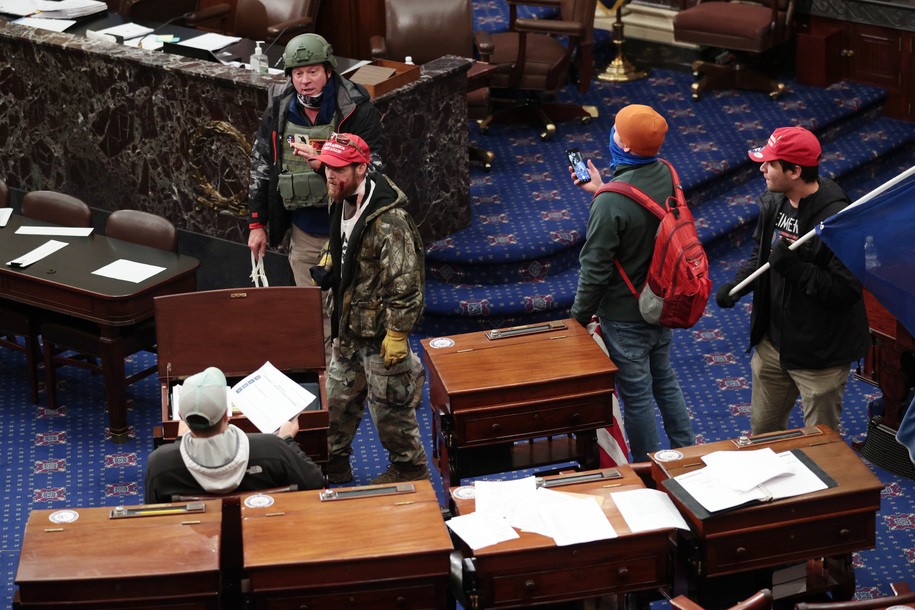 Professional researchers, alongside sleuths of the internet have united to identify the traitorous insurgents who brazenly stormed the U.S. Capitol on Jan. 6, with impressive results. This hunt has of course been aided by the brazenness of the Trump-supporting insurrectionists, who posed for press and for each other, and live-streamed their violent acts of treason.

As people comb through the seemingly endless stream of photos and videos of the treason along the way to a more complete picture of what occurred on Wednesday, the images of armed men in tactical gear have particularly stood out as an indicator of what might have been. In particular, men with handfuls of plastic flex cuffs have served as a chilling indication of what some of Trump’s terrorists came to do: Take hostages, and do harm to them.  Now, The New Yorker reports, one of those men—“clad in a combat helmet, body armor, and other tactical gear, (and) carrying zip-tie handcuffs—has been identified. As his friends told Ronan Farrow, he is retired Lt. Col. Larry Rendall Brock, Jr. an Air Force combat veteran who’s long been radicalized.

John Scott-Railton is a senior researcher at the University of Toronto’s Citizen Lab, and swiftly identified Brock after image enhancement software made his outfit’s flair recognizable. There was the Texas flag patch, and even more helpful, there was the yellow fleur de lis of the 706th Fighter Squadron. Scott-Railton wasn’t the only person in what he calls the “digital ecosystem of accountability” to track Brock down, either: Michael Sheldon of the Atlantic Council’s Digital Forensic Research Lab, also identified the 53-year-old father of three who lives in an affluent part of the Dallas metro area.

Brock’s friends and family tell Farrow that his military service is a huge part of how he defines himself, and that they’ve all but washed their hands of him in recent years, months, weeks, as he’s become radicalized and “extreme” and engaged in “weird rage talk.” His Trump support is fervent, and his racism has been on display. “Both family members said that Brock had made racist remarks in their presence and that they believed white-supremacist views may have contributed to his motivations,” Farrow writes—before noting that Brock doesn’t deny he’s one of the men that Twitter calls “Zip Tie Guy,” but he’s not racist.

The real doozy? Brock’s explanation for the photos and video of him from the riot, which show him both on the House floor, and in Speaker of the House Nancy Pelosi’s office.

(Brock) echoed Trump’s baseless claims of election fraud, saying that he derived his understanding of the matter principally from social media. He told me that he had gone to Washington, D.C., to demonstrate peacefully. “The President asked for his supporters to be there to attend, and I felt like it was important, because of how much I love this country, to actually be there,” he said. Brock added that he did not identify as part of any organized group and claimed that, despite the scenes of destruction that day, he had seen no violence. When he arrived at the Capitol, he said, he assumed he was welcome to enter the building.

Brock denied that he had entered Pelosi’s office suite, saying that he “stopped five to ten feet ahead of the sign” bearing her title that insurrectionists later tore down and brandished. However, in the ITV video, he appears to emerge from the suite. Brock said that he had worn tactical gear because “I didn’t want to get stabbed or hurt,” citing “B.L.M. and Antifa” as potential aggressors. He claimed that he had found the zip-tie handcuffs on the floor. “I wish I had not picked those up,” he told me. “My thought process there was I would pick them up and give them to an officer when I see one. . . . I didn’t do that because I had put them in my coat, and I honestly forgot about them.”

Well, gee. That settles it. Surely the FBI will believe him. The full Farrow piece is worth a read.

Meanwhile, Twitter sleuths and expert researchers are also focused on a second Zip Tie Guy (there were at least three).

Was described by a former spec ops guy as “the scariest picture I saw from the whole thing.” pic.twitter.com/yxGeQ3ffdW

This “professionally trained insurrectionist” was also photographed outside the Capitol complex—with a woman who is old enough to be his mother. Late Friday night, Twitter sleuths thought that they may have found footage of him on two hotel lobby livestreams filmed Wednesday evening—also with his mommy. In one livestream, Zip Tie Mama’s Boy even gives an extensive interview.

As of this writing, it’s unclear if the sleuths are correct. Unlike Brock, or Podium Guy (who was arrested Saturday), or so many of the other brazen terrorists who did nothing to hide their identity as they stormed the Capitol, Zip Tie Mama’s Boy’s identity was masked thoroughly while he was committing his federal crimes—even if his mother’s wasn’t.