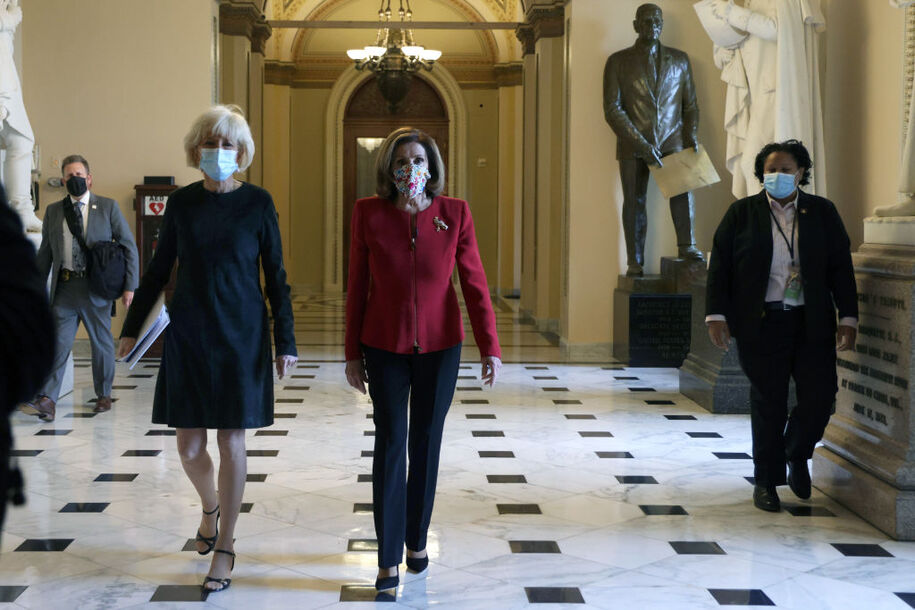 If anyone ever doubted that American democracy was at least temporarily saved by voters defeating Donald Trump at the ballot box, they can lay that lingering doubt to rest.

Just as people on the left have been warning for more than four years, Trump provided incontrovertible proof this week that he is an unmoored menace to society, an existential threat to the country, and a danger to the entire globe.

In fact, when House Speaker Nancy Pelosi released a letter Friday morning reassuring her Democratic colleagues that she had spoken with military leadership about safeguarding the country’s nuclear stockpile from Trump, it was likely as much about reassuring the world that someone reasonable was in charge as it was about comforting the American people.

“This morning, I spoke to the Chairman of the Joint Chiefs of Staff Mark Milley to discuss available precautions for preventing an unstable president from initiating military hostilities or accessing the launch codes and ordering a nuclear strike,” Pelosi relayed. “The situation of this unhinged president could not be more dangerous, and we must do everything that we can to protect the American people from his unbalanced assault on our country and our democracy.”

Jan. 6, 2021 will live in infamy—as will the four years in which Republican lawmakers coddled a would-be dictator who grew so confident in his iron grip on power that he ultimately declared war on the very government under his command. The absolutely harrowing episode has so far resulted in five deaths, including one Capitol Police officer who died of injuries he sustained during the violent insurrection incited by Trump and his henchmen. But it could have been far far worse. The military gear donned by the terrorists, the zip ties or “flex cuffs” some carried, and the gallows the mob erected outside the Capitol left no doubt they were there for blood. Nearly the entire line of succession was in the buildings they stormed—Vice President Mike Pence, House Speaker Nancy Pelosi, and Senate President Pro Tempore Chuck Grassley, all of whom were whisked away to a secure location.

But as Rep. Sean Maloney of New York later explained on MSNBC, the rioters were one door away from capturing any number of congressional members in the Speaker’s Lobby as lawmakers made their way to the only remaining escape route in the building. The Washington Post obtained video of the scene, capturing the tense moment that resulted in the fatal shooting of one rioter without getting overly graphic. Other lawmakers, congressional staff, and journalists also narrowly escaped injury or being taken hostage as they huddled in offices and congressional chambers, sometimes donning gas masks and hugging the floor for cover. In essence, the nation was one door, one gunshot, one execution away from a moment where no one could have earthly known what would come next. And as dangerous as the territory is that we are now in, that precarious moment of unknowing easily could have precipitated a far more perilous period for our country and the world.

And yet, within the same 24-hour period surrounding this riotous assault on U.S. governance, Democrats clinched the 50th Senate seat that secured their impending control of both chambers of Congress, while congressional lawmakers still managed to certify 306 electoral votes ensuring President-elect Joe Biden will indeed become commander in chief at noon on Jan. 20.

At the same time, the Republican Party has been indefinitely thrown into an epic tailspin. Its future leadership is an open question. Its electoral viability is a complete mystery after the party managed to lose the House, Senate, and White House in a period of four years. Will Trump voters still show up at the polls in future elections? Will conservative-leaning suburbanites stick with a party that aided and abetted a president who sicced a violent mob on the U.S. Capitol? Maybe that’s why the GOP is currently splitting up between staunch pro-seditionists and those who are abruptly and belatedly advocating for a break with Trump after four years of helping him destroy the country’s Democratic norms at every possible turn.

If there’s a silver lining in all this upheaval, it’s that Democrats are finally at the point where (forgive me) they seem to have no f’cks left to give. Instead of a lengthy internal debate over whether it makes sense to impeach a president who literally tried to get them killed while overthrowing the government, they are ploughing ahead, electoral consequences be damned. That’s a far cry from where they started the week, with some top congressional Democrats expressing their hope to simply move beyond any lingering investigations of Trump and his administration. But Trump’s deadly meltdown paired with the GOP’s feckless refusal to confront his unfitness for office seems to have finally pushed Democratic lawmakers over the brink.

Democrats coalesced around removing Trump from office by any means possible within 24 hours of the siege. They immediately pressured Pence and Trump’s Cabinet to invoke the 25th Amendment. After Pence failed to even return the phone calls placed by Democratic leaders Pelosi and Chuck Schumer, Pelosi told House Democrats impeachment articles would be introduced on Monday.

In a teaser clip of Pelosi’s 60 Minutes interview set to air on Sunday, Pelosi went further than removal, calling for prosecution of Trump.

“Sadly, the person running the Executive Branch is a deranged, unhinged, dangerous president of the United States and it will be a number of days until we can be protected from him,” Pelosi told Lesley Stahl, adding that “nothing” was off the table. “He has done something so serious that there should be a prosecution against him.”

Outside of Trump and his cultists, absolutely no one wanted the horrific events that unfolded this week to take place. It was one of the darkest and most shameful moments in U.S. history. But the unimaginable episode also appears to have inspired a resolve among congressional Democrats that could prove a game changer heading into an era that may arguably be among the most consequential years of U.S. governance since the years surrounding the Civil Rights movement, the Great Depression, and even the Civil War.