Republican rep. remains quiet when asked whether he smuggled a firearm into House chamber on Jan 6 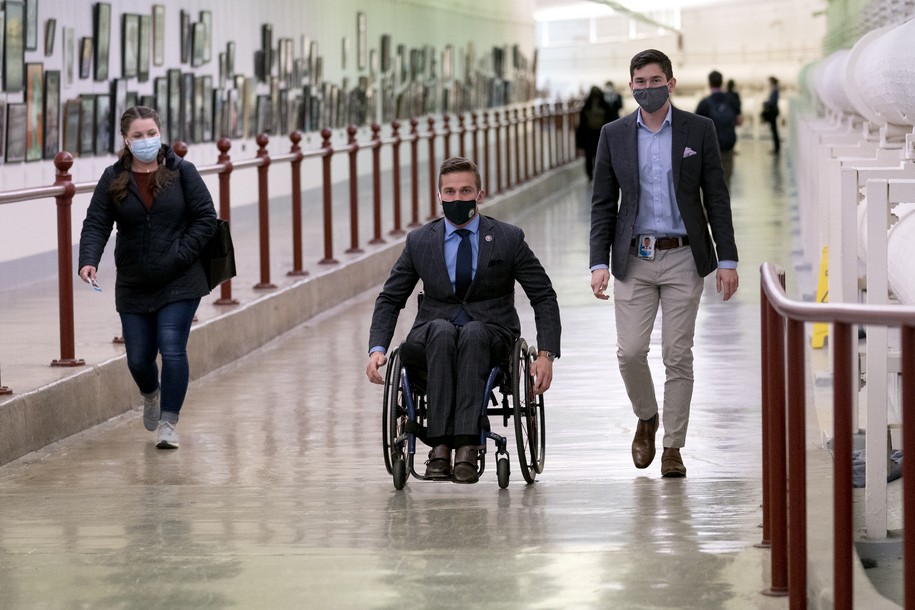 The new security measures at the Capitol building in Washington, D.C., were predictable. Also predictable, the response of pro-gun, pro-school metal detector conservatives whining about having to go through metal detectors. Many of the “freshman” representatives, like Republican Lauren Boebert of Colorado have been openly flaunting their gun carrying around the Capitol. They do this because they’re cowardly folks, with small ideas, fragile egos, and an inability to manage the rage they feel that Santa Claus didn’t turn them into the most popular people in the universe.

Like Boebert, Republican Rep. Madison Cawthorn of North Carolina is a special kind of terrible. A day after the insurrection on the Capitol building, Cawthorn told a newspaper that he had a gun on him, “Fortunately, I was armed, so we would have been able to protect ourselves.” While it is against the law for even permitted citizens to carry firearms on Capitol grounds, these officials are trying to stretch an old rule that allows members of Congress to keep guns in their office and carry them around “Capitol grounds.” Of course, even this rule does not allow for guns on the House floor—a law that Cawthorn and Boebert may have already violated.

Cawthorn has not responded to questions about how he happened to have his concealed firearm on him when the Capitol building was beset by insurrectionists. If he was able to go back to his office and retrieve his gun, or someone else was, in between the point when the House chamber was closed down and representatives were escorted to safety, is not known. In fact, it seems rather unlikely. Cawthorn’s communications director Micah Bock released a statement that didn’t assuage anyone’s fears that Cawthorn isn’t absolutely breaking the law. “Rep. Cawthorn exercises his 2nd Amendment rights, as well as the privileges available to members of Congress. Congressman Cawthorn seeks to follow the guidance of Capitol police and is immensely grateful for the work that they do.”

Is it the wheelchair thing or the criminal thing, Rep. Cawthorn? Because Black and brown kids in city schools without wheelchairs and with wheelchairs go through that every day and they haven’t promoted an insurrection against the government. As one House Democrat told CNN, “Until there’s an investigation and until we understand our colleagues’ level of complicity in the attack, we don’t know how involved they really were. Until we have answers, I don’t think we should trust them—not all of them of course, but some of them.”