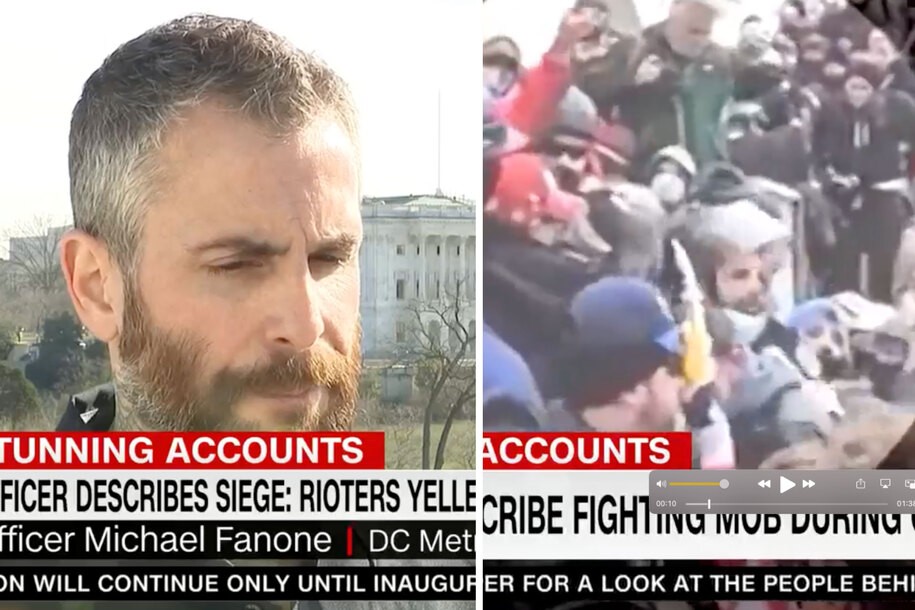 Regardless of your feelings about law enforcement in general, and specifically what they did and did not do (and why) during the Jan. 6 Capitol building insurrection, many of their lives were clearly in danger. Outnumbered and facing a crowd that selectively hides behind the American flag and “Blue lives matter” stickers but also hates having laws enforced on themselves, Capitol Police and DC Metro Police officers were assaulted to varying degrees by pro-Trump fascists.

DC Metro Police Officer Michael Fanone was not on duty Jan. 6, but lives near the Capitol building, so he suited up and went down when he heard the commotion outside. Dressed in riot gear, Fanone was pushed and grabbed by the mob of insurgents inside one of the Capitol building’s entrances, pulled out onto the steps, then punched, beaten, and tased repeatedly. Fanone had a deadly serious message to all of those Blue Lives Matter MAGA bullshit artists who want to hide their weak egos and cruelty behind fake patriotism and an even faker respect for law enforcement.

Fanone told CNN that “some guy started getting a hold of my gun. And they were screaming out, you know, ‘Kill him with his own gun.’” Fanone said at that point he realized that while he could maybe shoot a few of the people attacking him, it was unlikely that doing so would save his own life, and could give the mob exactly the kind of justification they were looking for to murder him. He decided to try and remind the fascists that he was a human being, “I just remember yelling out that I have kids, and it seemed to work. Some people in the crowd started to encircle me and try to offer me some level of protection.”

But Fanone isn’t calling out heroes where there are none. “A lot of people have asked me my thoughts on the individuals in the crowd that, you know, that helped me or tried to offer some assistance. And I think kind of the conclusion I’ve come to is like, thank you, but fuck you for being there.”

That’s something I can get behind.