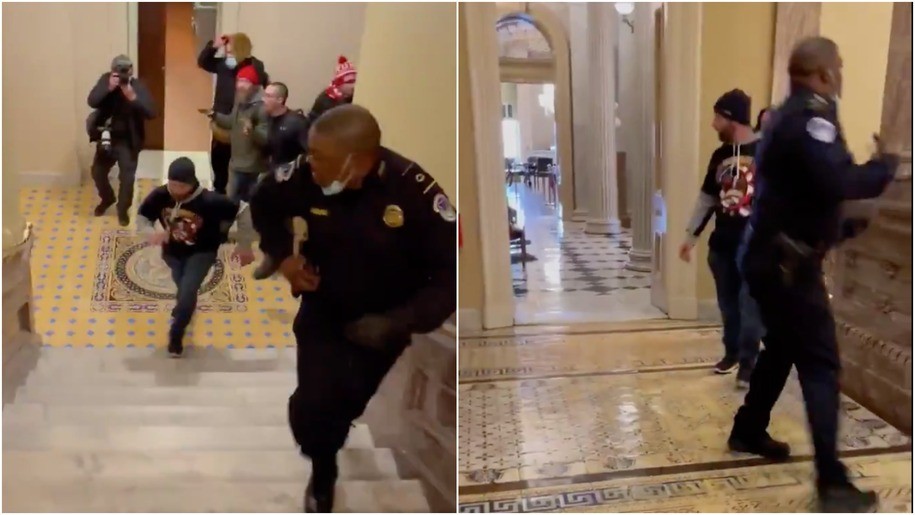 It was clear from the moment that images emerged showing men inside the Capitol carrying flexible handcuffs, and crowds outside the building erecting a gallows, that those invading the halls of Congress intended a lot more than just a tour of the artwork. Federal prosecutors have labeled the January 6 event both “a violent insurrection” and “armed revolution,” which opens those involved to federal charges of sedition. However, even sedition might not be the worst charge that ends up being directed at some of those who battered their way past police, smashed open doors and windows, and prowled through the Capitol.

As the Baltimore Sun reports, federal prosecutors have also confirmed that insurrectionists intended to “capture and assassinate elected officials.” While no one has yet been charged with crimes related to this plot, there are at least a couple of people already in custody who are very good candidates, and that includes “Q Shaman” Jacob Chansley. The idea that a crowd of Trump supporters was out to overthrow the government in a plan that included multiple assassinations is shocking. The idea that this group included a large number of off-duty police and active or former military only makes it worse.

But the worst betrayal of all may have been members of Congress who assisted insurgents in capturing the Capitol and hunting down their colleagues. The investigation into that possibility is now underway.

On Tuesday, Rep. Mikie Sherrill stated that members of Congress had groups coming through the Capitol on January 5 as a “reconnaissance” for the following day.

This is quite an allegation from Rep. Mikie Sherrill. pic.twitter.com/0IBBwasLdt

On Wednesday, some Republican members of Congress appeared to be communicating critical information to insurgents in the middle of the assault.

The Speaker has been removed from the chambers.

On Thursday, 34 Democratic members of Congress requested an investigation into those tours and made it clear that they weren’t just concerned about the tours in the aftermath of the attempted coup, but had raised issues about the size and nature of the tours they were seeing on the afternoon of the 5th. There were large numbers of visitors, those visitors were in unusual areas, and representatives like Sherrill, who has a military background, felt they were behaving suspiciously.

On Friday, Politico reports that Speaker of the House Nancy Pelosi has made it clear, any members who were involved in collaborating with insurgents don’t just face expulsion from the chamber. They should be prepared to face indictment. “If in fact it is found that members of Congress were accomplices to this insurrection, if they aided and abetted the crime, there may have to be actions taken beyond the Congress in terms of prosecutions,” said Pelosi.

While his position may have protected Donald Trump from legal issues over the last four years, members of Congress don’t share that protection. It’s clear that any found to be involved in planning or assisting the insurgents could face serious charges. Also on Friday, Capitol police confirmed that an investigation into those pre-insurgency tours is underway.

Against this backdrop, it’s no wonder that GOP Freshman Lauren Boebert is very, very nervous.

Boebert essentially admitted to being involved in the recent Capitol attack after calling out New York Rep. Sean Patrick Maloney in a public statement. Referring to his allusion that some Congress members gave tours to the Jan. 6 Capitol rioters, Boebert described Maloney’s appearance on MSNBC Wednesday as “lies,” adding that “all of your implications are categorically false.”

But the catch is, Maloney never named any members of Congress. By issuing this statement and writing that Maloney’s “comments [about her] are extremely offensive, shameful and dangerous,” Boebert implied that the member of Congress Maloney was referring to was, in fact, her.

Add to all this the growing body of evidence that shows GOP organizations across the nation were been directly involved in planning for and encouraging the insurgency, with little effort to disguise exactly what they were doing. It’s a fair bet that when federal prosecutors get around to making charges of sedition and insurgency, they will not be restricted to just guys wearing funny hats inside the Capitol.