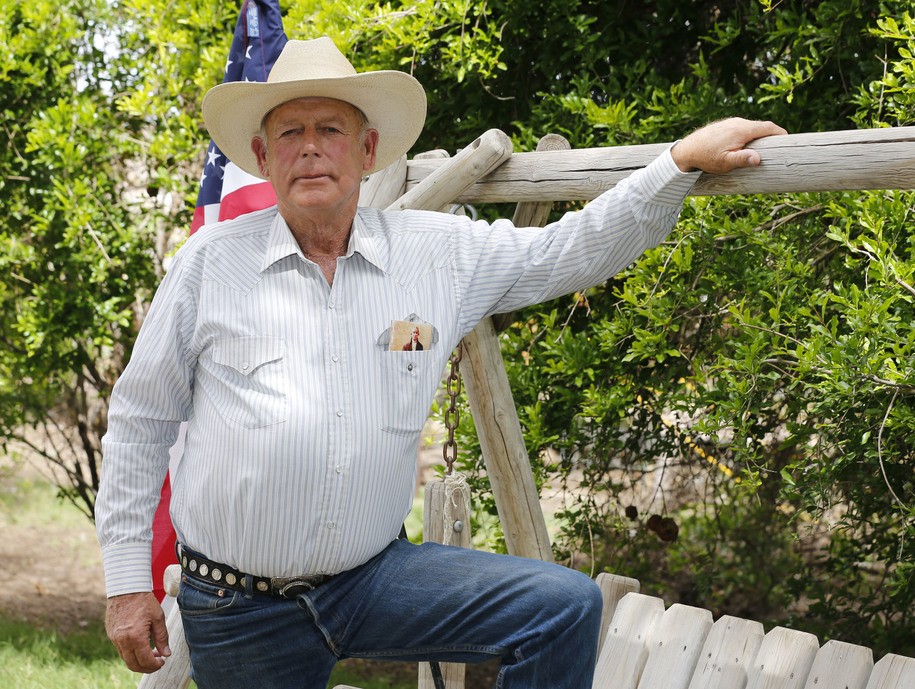 Remember Cliven Bundy, the stubborn Nevada rancher whose decades-long refusal to pay grazing fees for cattle he runs on federal land led to a 2014 armed stand-off at his family ranch and in 2016, another armed stand-off led by his son Ammon Bundy in the Malheur National Wildlife Refuge? The latter had been home to the indigenous Moapa Paiute until they were forced out at gunpoint off in the 1870s. The elder Bundy claims ancestral rights to that land because of his libertarian views and, he claims, because his ancestors came on The Mayflower. Bundy wound up in pre-trial detention for 18 months over the 2014 stand-off, but because of prosecutorial misconduct, he was released and his case adjudged a mistrial. New charges weren’t filed. He and his large family continue to run cattle on federal land without paying the modest grazing fees. By 2014, 21 years after he began refusing to pay for this use of public land, the back fees had accumulated to more than $1 million. Currently, 24,000 permit holders are charged $1.35 per animal per month for grazing—a very good deal. But not as good as Bundy’s steal.

Now the 74-year-old rancher has advice for President-elect Joe Biden’s administration: It better not come trying to collect those unpaid fees, because he and his militant supporters are willing to “walk towards guns” again if that happens. While the new administration has more than a full platter of priorities to deal with when it comes into office Wednesday, some environmental advocates hope that action is taken to stop this scofflaw.

“The Bundy ranch saga will continue, won’t it? Do you believe so? Do you believe that they’ll come after you?” asked Santilli, who (struck) a plea deal over his own role in the Nevada standoff.

“Yes, I do,” Bundy replied. “They’ve been waiting for this … but it’s not only for (the) Bundy ranch; it’s for all Americans. We’re in trouble if it changes.”

He later added: “We’re going to have to go forward. If we have to walk forward towards guns, which we did at the Bundy ranch, we have to do that. And we have to have faith.”

Bundy’s views don’t come close to meshing with those of the vast majority of Americans, including ranchers who follow federal land-use laws and pay their fees without whining or latching onto ludicrous theories about how only the states and individuals, not the federal government, can own land. He is a supporter of the sovereign citizen movement that asserts county sheriffs are the most powerful officials in the nation. He doesn’t accept that federal laws supersede those of the states and believes citizens aren’t required to obey them. He has received support from the Oath Keepers, Tenthers, and White Mountain Defenders—all right-wing extremist groups. The Southern Poverty Law Center considers his views close to that of the extremist Posse Comitatus.

As Western Watersheds Project Executive Director Erik Molvar told Yachnin, “The lax law enforcement on public lands can be seen as a direct line to the lawlessness we saw in the Malheur National Wildlife Refuge, Recapture Canyon in Utah, and now in Washington, D.C.,” Molvar said, referring to the 2016 stand-off and to an illegal all-terrain vehicle protest ride in the canyon in 2015. He added, “The failure of the federal government to crack down on law on public lands has created a class of insurrectionists who feel entitled to break the law whenever they want.”

Just like so many folks who’ve been empowered by the grifter Trump regime.

“If we continue to allow these very highly publicized violations of public laws and public lands, then it’s going to become a free-for-all out there,” Molvar said, taking note of a dam and associated equipment that Bundy’s son Ryan Bundy built across Gold Butte National Monument last spring. “There will be no semblance of law and order on federal public lands, and that will be a major disservice to all Americans.”

Molvar wants the Biden administration not to let the situation fester. While it’s true the government botched matters when it tried to collect back fees in 2014, Molvar and other public lands advocates argue that the feds can easily get this situation under control. Among the fixes: issuing bench warrants holding Bundy in contempt of court for trespassing and refusing to pay grazing fees, or putting a lien on Bundy’s property (such as proceeds from cattle auctions.)

Richard Spotts, who before retirement spent 15 years as the planning and environmental coordinator for the Bureau of Land Management’s (BLM) Arizona Strip District, told Yachnin, “It boggles the mind why these obvious tactics have not been used, and even why BLM kept planning these huge, all-or-nothing roundups.” Liens on Bundy’s cattle would at least “take the profit motive out of trespass grazing,” Spotts said.

Public lands are the people’s lands. While critics of some BLM and the National Park Service land policies have valid points to make, the Bundys and their ilk don’t care about reforming policy so that land is better protected. They want no regulations or fees hindering their profiteering off the taxpayers. That, of course, isn’t just a philosophy of a few extremist ranchers. The extractive industries have done a bang-up job of polluting public land for more than a century, paying a pittance to the government for the land they have often wrecked beyond what reclamation efforts can fully restore. But except when they are cheating Indian tribes with sweetheart royalty deals, they, unlike Bundy, are at least paying something.

Joe Biden doubtless isn’t giving any thought to Cliven Bundy’s threat. As Molvar points out, federal authorities have remedies that don’t involve any firearms to walk toward. All Biden has to do when the time comes is snap his fingers.