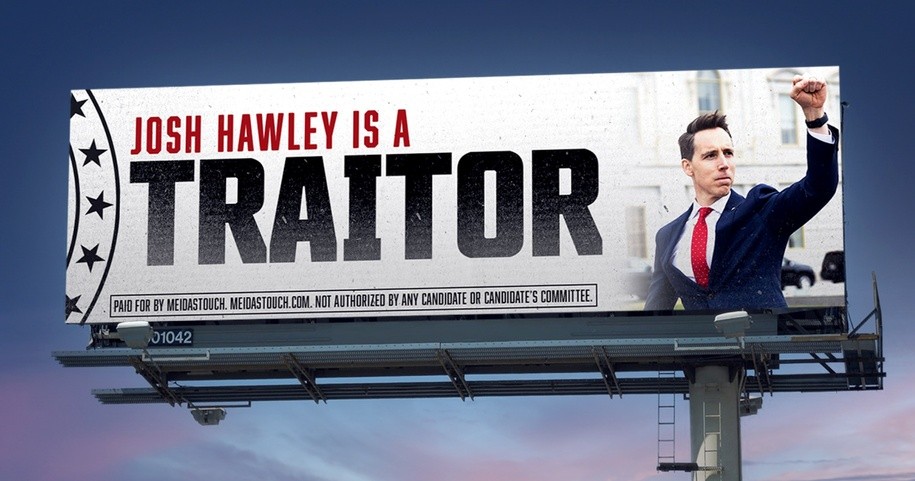 Having made it past November, and even past the Jan. 5 runoff in Georgia, it may seem like the airwaves and signboards near you would finally be free of political ads. However … that’s not quite true. While the idea that ads are already showing up for the 2022 election cycle might even be enough to generate howls, there’s a reason that these ads should be welcomed. Because these ads are all about holding Republicans accountable for what they’ve done over the last four years.

That starts with ads that are going on the air in Wisconsin to detail the explicit connection between Sen. Ron Johnson and the violent attempt to overthrow the government. Voters to the south might not be catching those ads, but they could still run across a Josh Hawley billboard from MeidasTouch. It’s all just part of the move to clear the halls of Congress … of the people who promoted a violent attack on the halls of Congress.

During Wednesday night’s impeachment hearing, newly seated St. Louis Rep. Cori Bush took down white supremacy in 30 seconds flat. Just a day before, she filed a resolution calling for the expulsion of 100 or more House Republicans who didn’t just vote against certifying the results of the Electoral College, but promoted the idea that the election had been “stolen”—the big lie that drove rioters into the Capitol on Jan. 6.

It’s unlikely that House members will garner the necessary votes to discharge a quarter of their members. However, if the investigation into members who actively assisted in planning the insurrection turns up definitive evidence, there is a very good chance that some members might not just be expelled, but indicted.

On the Senate side, both Hawley and Ted Cruz are likely to survive their support for overturning the outcome of the election, even with Hawley continuing to signal his support for that effort in the hours immediately after the Senate had been forced to flee for their lives. However, it’s very likely voters are going to get plenty of reminders about which senator was giving terrorists a raised fist salute on that terrible day.

However, as The New York Times reports, Wisconsin voters don’t need to wait to see the lines between Johnson and the insurgency traced. A television ad from the Democratic Party of Wisconsin hit the air Wednesday morning. It signals the start of a solid week in which Johnson will be pounded on both television and social media for his role in spreading lies about the 2020 election.

Johnson—who has always topped the chart of senators most likely to be Russian assets—initiated and promoted lies about the election both before and after the votes were counted. And he added one more lie, because after telling voters that he was going to self-limit to two terms in the Senate, he might just decide to stay in the Senate so he can block legislation from the Democratic House. That would put Johnson up for his next term in 2022, and also turns him into a big target for Democrats seeking to dislodge a Trump-Putin fan from a state Joe Biden won.

The ad pulls no punches. It features pictures of the mob swarming over the Capitol while recalling a stinging editorial in the Milwaukee Journal that goes after several members of the Senate’s “sedition caucus,” including both Johnson and Hawley. That editorial calls on Johnson to resign immediately rather than waiting 21 months for Wisconsin voters to send him packing.

Johnson is unlikely to quit. Neither are the ads.