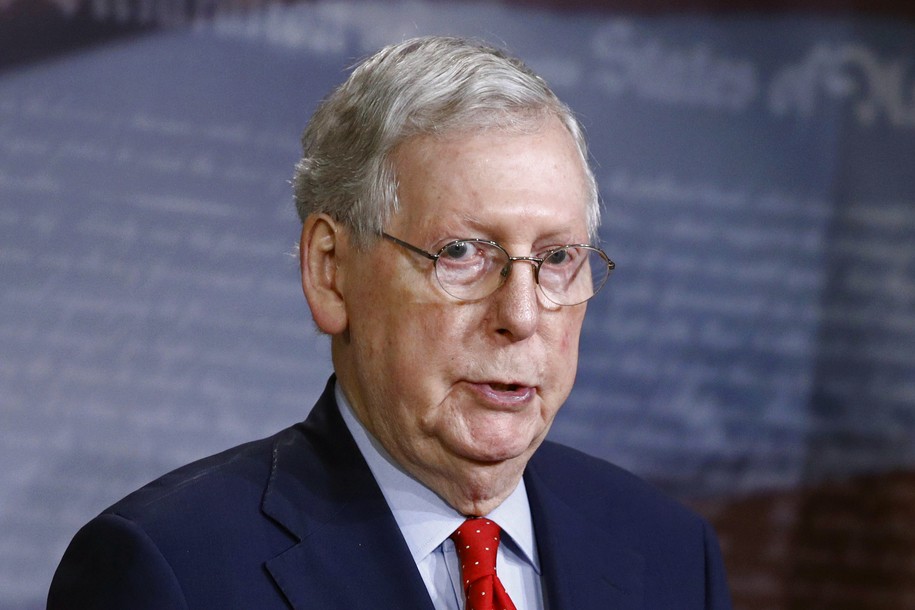 Senate GOP Leader Mitch McConnell, who just one year ago led the charge to acquit Donald Trump of impeachment charges, has been going through a head-spinning, donor-inspired evolution over the past couple weeks since Trump incited a violent insurrection at the U.S. Capitol.

After more than five weeks of silently endorsing Trump’s efforts to overturn the election results, McConnell has moved from accepting President-elect Joe Biden’s win to getting to “maybe” on convicting Trump to publicly blaming Trump for the murderous rioters who stormed the Capitol.

“The mob was fed lies,” McConnell said from the Senate floor Tuesday, as he prepares to hand off the Senate majority to Democrats. “They were provoked by the president and other powerful people,” McConnell added, conveniently failing to define “other people,” since the vast majority of GOP congressional lawmakers helped fuel the fire of outrage among Trump supporters. Nonetheless, McConnell’s comments are still by the far the furthest he has gone in trying to disentangle himself and his caucus from Trump. Among GOP congressional leadership, only Rep. Liz Cheney of Wyoming, Republicans’ No. 3 in the House, has gone further with her statement skewering Trump for lighting “the flame of the attack.”

McConnell spent four solid years diligently avoiding leveling any direct criticism whatsoever at Trump, whether he was calling white supremacists “very fine people” or trying to steal a second election by extorting foreign officials. In fact, McConnell rallied his caucus to end the Senate trial last year without hearing from a single witness. In the process, McConnell and Senate Republicans taught Trump he would never suffer the consequences of his actions, no matter how abhorrent or harmful they were to American democracy.

But surprise, surprise—the mighty dollar is proving more powerful than opportunistic loyalty to a man now ending his term as the grossest, pettiest, and least liked American president in modern history. And Republican lawmakers are indeed facing a reckoning for building Trump into a monster and then fanning the flames of his bogus claims that the election was stolen from him. Not only are corporate donors pulling back from their widespread support of Sedition Party candidates, but other big-dollar donors are making their demands for a break with Trump perfectly clear. The New York Times reported over the weekend:

William E. Oberndorf, an influential Republican donor who gave $2.5 million to Mr. McConnell’s super PAC, the Senate Leadership Fund, in the 2020 election, said that donors should be closely watching the impeachment votes as they formulate their plans for giving. A longtime critic of Mr. Trump, Mr. Oberndorf said it had been a mistake for the party not to oust Mr. Trump during his first impeachment trial last year.

“They now have a chance to address this egregious mistake and make sure Donald Trump will never be able to run for public office again,” Mr. Oberndorf said. “Republican donors should be paying attention to how our elected officials vote on this matter.”

McConnell, who has never really liked Trump, may be legitimately angry over the violent mob Trump sicced on congressional lawmakers, Democrats and Republicans alike. But he’s also sure gotten some monetary help in getting there. And given the choice between continuing to endear himself to Trump and securing the cash to help him win back the Senate majority? Sorry Trump, you lose.

In fact, McConnell doesn’t even have the time to attend Trump’s supposed celebratory send-off Wednesday morning at Andrews Air Force Base—he’ll be attending Catholic Mass with Joe Biden instead.

.@senatemajldr on the U.S. Capitol Attack: “The mob was fed lies. They were provoked by the president and other powerful people.” pic.twitter.com/QIeviyHkl3