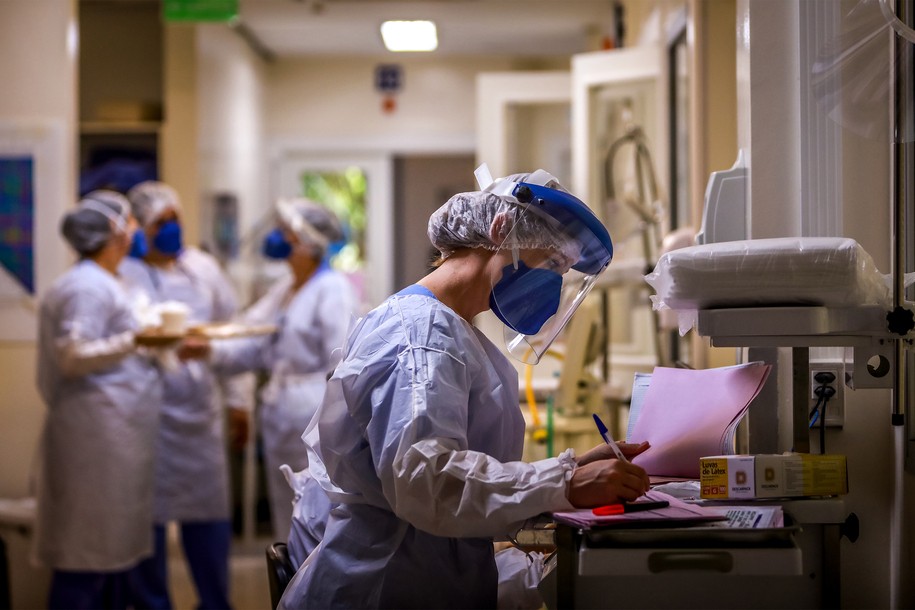 In order to reproduce, a virus must invade and co-opt the mechanisms of a living cell. In the case of SARS-CoV-2, that means copying just 30,000 base pairs of single-threaded RNA. Written out on paper, it would take just about 10 pages of single-spaced text to completely describe the genetic makeup of the virus. In comparison, the human genetic code, about 3 billion base pairs of double-stranded DNA, would take about 1 million pages. As viruses go, the novel coronavirus behind COVID-19 is pretty small. It’s not the smallest; some viruses that specialize in attacking bacteria have a genetic code containing only about 5,000 nucleotides. Influenza A is just 13,600 nucleotides. On the other hand, there are “giant” viruses with genetic codes containing over 1 million nucleotides, so 30,000 is still on the low end.

Every time those 10 pages of genetic code get copied, there is a moderate chance that mistakes will be made. Most changes don’t change anything. Most changes that do change something are bad for the virus in terms of making it simply unable to do its job of entering a cell, hijacking the organelles of reproduction, and cranking out a host of new viruses. However, some small number—some tiny, tiny fraction—will turn out to be to the virus’ benefit. It’s very unlikely. But when there are millions of hosts carrying trillions of viruses, the very unlikely becomes the inevitable.

Mutations can come from just about anywhere. Some are simple transcription errors made by the molecules that have the job of duplicating new RNA based on the model provided by the invading virus. Sometimes a passing cosmic ray can generate an ion that causes a small change. Patients being treated with antiviral drugs, or with plasma from other patients, can kick up higher numbers of mutations.

In evolution, the only change that really matters is reproduction. Evolution might produce a tiger with 10” claws, or a dinosaur so fierce it specializes in eating T. rex. But if those things don’t lead to reproducing, they are evolutionary losers.

The same rules apply to the SARS-CoV-2 virus. There have undoubtedly been variations out there that led to a disease that was more deadly. Or less deadly. People have absolutely died because the particular version of the virus working through their cells was miles more lethal than the 1.8% death rate would suggest. None of that has really mattered to the overall world picture. What matters is whether the mutations carried by a variant change the rate of reproduction—that fearful R0 number.

A variant that has a higher R0 will spread more rapidly. Given enough access to potential hosts, it will outcompete lower R0 variants. If the two viruses are still so closely related that the antibodies for one virus will stop the other, then soon enough the high R0 version will all but completely replace the low R0 alternative—it “outcompetes” the slower version for the available hosts. When the slower version arrives, it finds that hosts have already been infected by the faster version. The immune system, triggered by that first-to-arrive virus, fights off the second comer.

Nextstrain is just one of several sites tracking changes to the SARS-CoV-2 virus as it continues to spread around the world. Those variants are divided into families called “clades” according to major changes and when they popped up. (Cladistics is a difficult topic to deal with briefly.) The original clade 19A—the virus that was prevalent in Wuhan province—was replaced by a clade called 20A (the “European version” that hit the Northeastern U.S. last spring). Then 20C became more dominant. And then 20G or 20H.

In each of these cases, it’s likely that the new version had a higher R0 than the version it replaced—at least in the conditions at the time. For example, viruses of clade 20G became much more prevalent in the United States than in most other nations, and quickly became dominant. Some of that was likely chance. But there was also probably some reason that this variant was able to better reproduce in the conditions in the United States than in other areas.

In the first few of these clades, the number of changes between the original virus and the variants spreading around was relatively small—a handful of “divergences.” But mutations accumulate. The latest versions of SARS-CoV-2 that have appeared in places like Brazil, Japan, South Africa, and the United States have dozens of differences from that 19A version.

In the media, a lot of attention has been focused on variants that recently become dominant in the U.K. as well as several other areas. Coming out of the 20H clade in Nextstrain’s nomenclature, the specific lineage is known as B.1.1.7. This variant shares a number of mutations that have been seen in other versions, including some changes to the portion of that short genetic code that describes the “spike protein.” The spike protein is the mechanism the virus uses to attach to and enter human cells using the ACE-2 receptor. Changes to the spike protein are worrisome for a number of reasons:

Fortunately, the U.K. version, which is now becoming dominant in several other areas and has been found in the United States, appears to check only the first box of this unholy trinity list. It is more infectious, but early indications are that it is still responsive to vaccine and people who have had earlier disease should not worry about being infected again by the B.1.1.7 variant.

So that’s good. Except … there are thousands of variants. That includes one called Brazil P1 that is now ravaging the city of Manaus, Brazil. This variant “contains a unique constellation of lineage defining mutations, including several mutations of known biological importance such as E484K, K417T, and N501Y.” That first mutation—E484K—is connected to variants that have a much lower response to antibodies generated by the original 19A spike protein. That could mean that current vaccines are ineffective in fighting off this version. Adding to the concern is the location. Manaus was already one of the most coronavirus-infected areas on the planet. Researchers had speculated that about 75% of the population there already had COVID-19 at one point, so if there was any place that should have been protected by “herd immunity,” this was it. Instead the city is so overrun with new cases that oxygen is being flown in by airlift. As a terrible “bonus,” this version may be more deadly than previous variants, as Manaus is showing a higher percentage of people having serious disease.

This variant may be more infectious, more serious, be many times less sensitive to existing vaccines, and be capable of re-infecting those who have already had COVID-19. If this holds up, this is, in effect, a new virus—an epidemic within the pandemic. It’s going to take some time to fully understand the risk represented by this variant, and by other variants that carry many of the same mutations. And while it’s absolutely possible to reformulate vaccines to include this changed version of the spike protein, that won’t happen overnight.

This is just one reason why Donald Trump’s parting effort to remove travel restrictions against passengers from South America is misguided, and why Joe Biden’s immediate move to put those right back should be welcomed. However, travel bans are not going to cut it. It makes it even more critical that the number of people carrying the SARS-CoV-2 virus be cut down as rapidly as possible. Which means a cooperative, global effort to enforce social distancing, testing, case management, tracking of variants, and distribution of vaccine.