Democrats working to roll over McConnell, if necessary, in order to provide critical COVID-19 relief 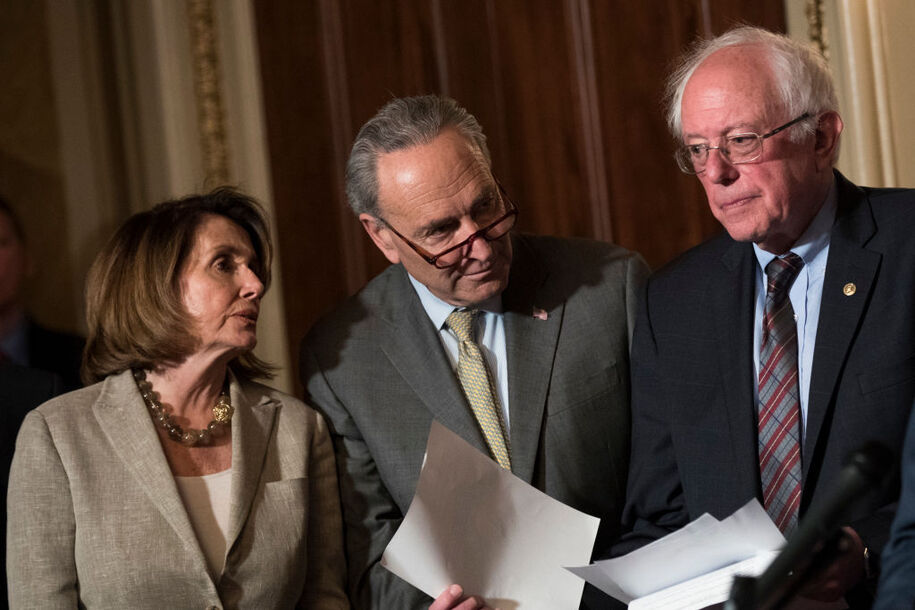 House and Senate Democratic leadership are fully on board with President Joe Biden’s $1.9 trillion plan for COVID-19 relief, and are already making contingency plans for the inevitable resistance from Senate Republicans. They continue to publicly say that they will work with Republicans on a bipartisan plan, but Senate Minority Leader Mitch McConnell is just as publicly giving them the finger. So behind the scenes, they are moving quickly on coronavirus relief.

The House will not be meeting in floor sessions next week, but Speaker Nancy Pelosi told reporters Thursday that committees will be meeting and that the package could hit the floor as soon as the week of Feb. 1. “We’re getting ready for a COVID relief package. We’ll be working on that as we go,” she said. “We’ll be doing our […] committee work all next week so that we are completely ready to go to the floor when we come back.” What that means, probably, is plotting out how to use budget reconciliation to get the package through, since the procedure requires a simple majority vote and Republicans couldn’t filibuster it. There are not a lot of things they can use the tool for, but they could use it to craft this package.

That would mean creating a “shell” budget resolution for the current fiscal year that would include instructions to the relevant House and Senate committees—the Senate Finance, Health, Education, Labor and Pensions, Banking and Agriculture committees and the House Ways and Means, Energy and Commerce, Financial Services, Agriculture committees—giving them the amounts to change in spending, revenue, or deficit targets for their parts of the bill, and instruction to put the smaller bills together in the larger package. Budget reconciliation can only be used, officially, on policies that change spending or revenues. It is fast-tracked in the Senate and cannot be blocked by filibuster.

Helpfully, Biden is giving congressional Democrats all the leeway they need on this. In a wonderful return to normal, White House Press Secretary Jennifer Psaki held a briefing Wednesday evening and told reporters that while Biden’s “clear preference” is a bipartisan agreement on the relief package, “we are also not going to take any tools off the table for how the […] House and Senate can get this urgent package done.” Meanwhile, Roll Call’s Paul Krawzak reports, “House and Senate leaders, authorizing committees and the Appropriations committees are coordinating closely and running scenarios by the Senate parliamentarian in preparation for writing the reconciliation instructions and bills.”

That includes incoming Senate Budget Chairman Bernie Sanders, who talked about the extraordinary demands of this crisis. “Millions of people are giving up on their government because they’re hurting and we are not responding,” he said. “And in any and every way we have got to respond to the pain the people are feeling in terms of hunger, in terms of evictions, in terms of people not having health care, not having jobs.” What would be extraordinary would be Republicans continuing to refuse to respond to that need, he said: “I hope many of them understand the crises that we’re facing. But if they don’t, we’ve got to go forward with reconciliation.”

Note that Democrats could do this without dismantling the filibuster, though they might be forced to do that in order to get the Budget Committee—all the committees—in Sanders’ and the Democrats’ hands, since McConnell is refusing to allow the Senate to move forward in organizing. By using the procedures available under reconciliation, Democrats (along with Vice President Kamala Harris) could even save the $15/hour minimum wage provision Biden has included in his package—which would arguably fall out of the purview of what should be in a budget reconciliation bill. If Republicans objected, they would have to muster 60 votes to strip it, meaning they’d have to get 10 Democrats to defect, which is not likely to happen.