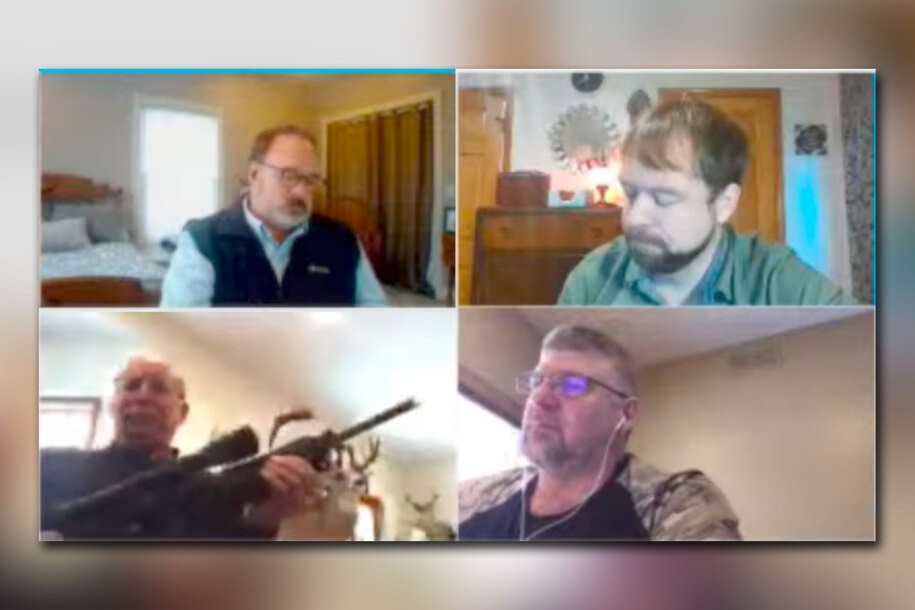 When the Proud Boys aren’t having beers with people on trial for murder or burning things they’ve vandalized from Black churches, they’re attempting to play a game where they both distance themselves from Donald Trump and their failed insurrection and are still brazenly an armed batch of wannabe storm troopers. But the Proud Boys are not alone—there are numerous officials across the country who have stroked their egos and supported their brand of terrorism for years.

During a Grand Traverse County Board of Commissioners virtual meeting in Michigan, East Bay Township resident Keli MacIntosh made a statement asking the board to denounce the Proud Boys. Members of the Proud Boys had addressed the board months ago regarding Second Amendment rules making the county a “Second Amendment Sanctuary.” In video you can see below, Republican Ron Clous, the commission’s vice chair according to reports, leaves the screen only to return brandishing a very large rifle—with a scope.

MacIntosh, a 74-year-old retied nurse who was literally saying that she respected people’s right to own a gun when Clous went all Sad Rambo, told The Washington Post: “He is supposed to be looking out for the best interests of the community. What is the message he’s trying to convey? That if someone speaks out against us, we’ll just threaten them with a gun?”

Clous did his entire virtual meeting in a room he set up to allow everyone watching to see all of his mounted deer heads. The impression Clous seems to have wanted to make is that he’s a hunter of deer trophies, I guess. Bringing out an enormous rifle while a resident talks about the need to call violent and shitty insurrections with guns a problem has led to calls for his resignation. Clous told the Traverse City Record Eagle that he had planned to show the gun and say he supported the Second Amendment before deciding not to and then putting the gun down. Of course, he added this sentiment: “The only thing I know about them (Proud Boys) is when they came and spoke to us. They were probably the most respected folks that got up and talked (at the March meeting). They were decent guys and they treated us with respect.”

You know who is super respectful? Hannibal Lecter in Silence of the Lambs. Commission Chair Rob Hentschel got a big kick out of it all and is laughing during the meeting. He told the Record Eagle: “I saw it across his chest and I thought it was ironic of him to do that. The person was talking about guns and he had one across his chest. I didn’t see him do anything illegal or dangerous with it. He wasn’t threatening or brandishing. He was just holding it.” Hentschel told Up North Live that Ron Clous isn’t a “threatening” man if you know him.

Hentschel also had this to say about the character of the Proud Boys: “I can’t speak for the commission I can only speak for myself. I will say I have met three proud boys in person, one of them was black so they’re not white supremacist, I really don’t know what they are about I’m not a member so I’m not going to go around denouncing every spaghetti monster someone comes up with to try and say they’re bad and I need to say something bad about them. I’m going to make my decision on my own based on the information that I gather. Now if they are racist in anyway than absolutely I denounce racist behavior.”

If tiny brain and tinier brain had been listening to what MacIntosh was saying, they might see that she was speaking to the complicity of some who allow Michigan’s “hunting gun culture” turn into what is simply “gun culture.” This is the fundamental issue Clous and his buddy Rob—and most Second Amendment faketriots—don’t get. If you want to blather about “good guys with guns” all the time, then you need to have a plan for how to deal with “bad guys with guns.” If you don’t, your Second Amendment platitudes are worthless.

If you want to, you can skip to around the 1:31:00 mark in the video below, which is when doody head decides this is the time to reaffirm that he likes to shoot deer with a big gun because that’s what he does with his time.