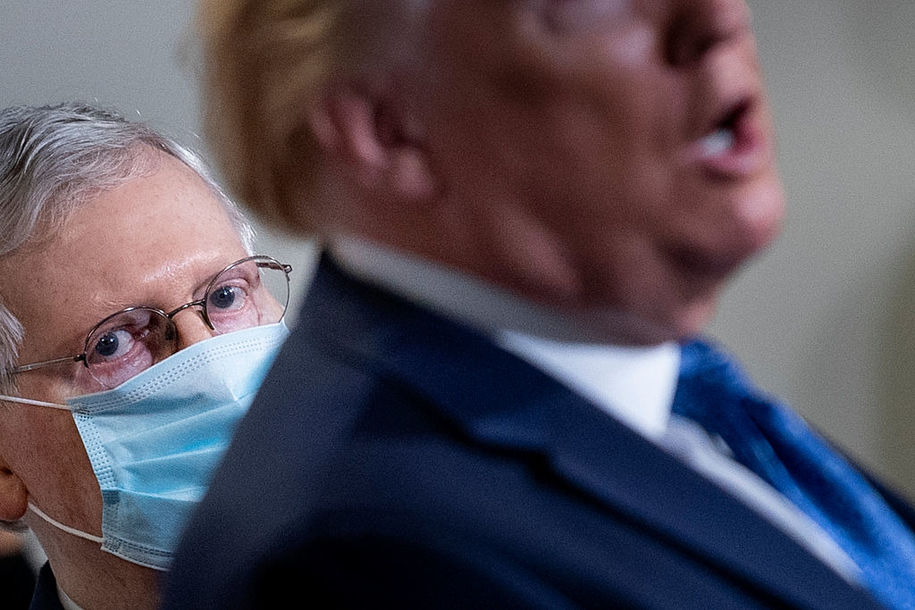 Aides to Donald Trump have apparently jingled some keys in front of him just long enough to divert him away from forming his own party, but that has only renewed his focus on torturing what remains of the Republican Party. First and foremost, that means figuring out how to exact revenge on Republicans who crossed him on impeachment, such as Rep. Liz Cheney of Wyoming.

But Trump’s dark cloud extends far beyond some dozen or so GOP congressional lawmakers all the way into the states, where parties are veering far right. Arizona is perhaps the best example, where the Republican Party voted to censure former GOP Sen. Jeff Flake and Cindy McCain for opposing Trump, and Republican Gov. Doug Ducey for failing to steal the election for Trump (i.e., certifying the election results).

At the same time, Trump also plans to meddle in the GOP’s effort to retake the U.S. Senate. In fact, he’s already arguably hobbled the party’s efforts—after being censured, Ducey decided not to run for the state’s Senate seat in 2022, where newly elected Democratic Sen. Mark Kelly will be trying to win a full term following his special election victory last November.

But Arizona’s Senate race is just the beginning. Republicans are now facing 2022 battles for open seats they currently control following Republican Senate retirements in Ohio, Pennsylvania, and North Carolina—a list that could easily expand. And this is where Minority Leader Mitch McConnell and Trump will almost surely be at loggerheads over who the party should nominate to run for those seats. In Ohio, for instance, Trumper and seditionist Rep. Jim Jordan seems like a shoo-in for backing by Trump. But while Jordan’s radical stances and questionable personal history are a perfect fit for his district, he’s likely not the strongest statewide candidate.

More broadly, McConnell surely wants to claim ownership over the center of gravity of the national party, but that will be impossible as long as Trump is squatting on his turf. That is particularly true because Trump remains a fundraising juggernaut at the moment, with tens of millions in PAC money at his disposal and almost no limitations on what he can do with it. And as we all know, Trump has zero allegiances to achieving real goals for the party, such as winning back the Senate or retaking the House. Trump’s only real goal is getting revenge and maintaining his stranglehold on the GOP. If Trump blows a few elections in the process, meh—that’s of little concern to him as long he can throw his weight around.

Speaking of which, House Minority Leader Kevin McCarthy is still trying to claw his way back into Trump’s good graces after admitting on the House floor that Trump played a role in helping to incite the Capitol riot. Of course, McCarthy also went full seditionist, opposing certification of the election results and voting against Trump’s impeachment. But Trump only ever fixates on the negative—it’s part of his charm.

So state Republican parties are severing their ties to the moderating forces that once made the GOP safe for suburban voters, Trump and McConnell are about to go to war on Senate candidates, and McCarthy is chasing his own tail in the House and coming up short every time. On top of that, an ominous fundraising cloud continues to hang over the seditionist caucus.

Other than that, everything’s perfectly copacetic. Oh, and if you want some insight into how those warring factions have been working out electorally for Republicans, look no further than Georgia, where twin GOP losses just handed control of the Senate to Democrats.