After normalizing Trump’s incompetent extremism, the press feels out how to best attack Joe Biden 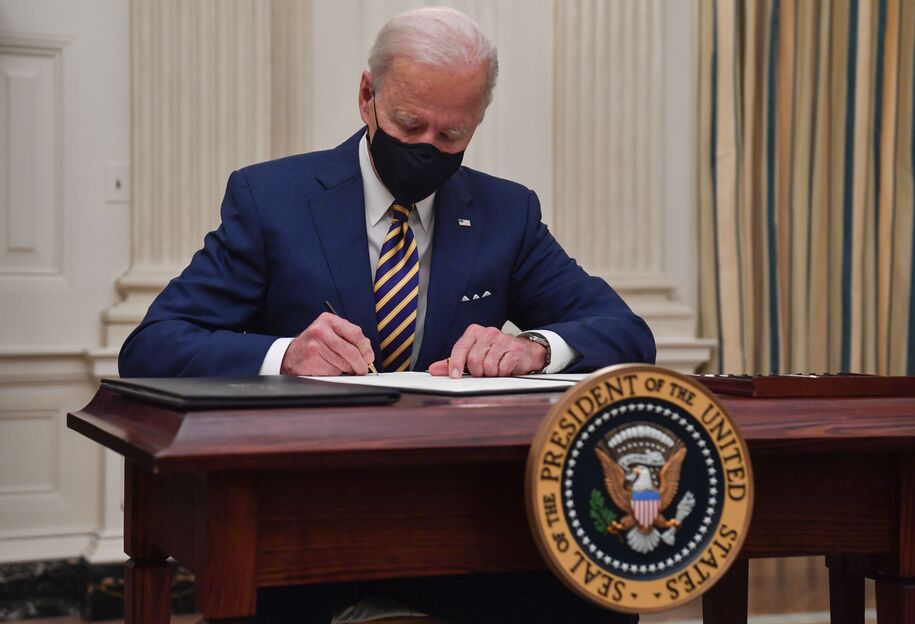 For four years, this nation’s political press corps worked diligently to paper over Donald Trump’s reckless incompetence, issue illiteracy, radical white nationalist agenda, cruelty for the sake of cruelty, and narcissistic obsessions that rendered him unable to process any element of outside reality except as a boost or slight to his own personal ego. Simultaneously, the press has itself been unable to process the in-full-view radicalization of the Republican Party itself, even as they sabotaged national security probes, nullified laws, responded to election losses by stripping the lost offices of their normal powers, allied themselves with white supremacist militias and, most importantly of all, restructured the party into a tool for promoting known-false information, hoaxes, propaganda, and other manipulations intended specifically to mislead the American public and sabotage American elections.

If you were wondering how long the nation’s top papers would take to revert to form under a Biden presidency, the answer is one week.

In The New York Times yesterday, the editorial board offered up the most milquetoast possible analysis of a point in time marked by nearly a half-million American pandemic deaths, the gutting and willful corruption of government agencies, and the near-assassination of Trump-disloyal public figures in the halls of the U.S. Capitol. Sweeping all these dangers aside, the Times urges President Joe Biden to “Ease Up on the Executive Actions,” grousing that Biden’s undoing of Trump’s myriad executive orders with his own executive orders is “a flawed substitute for legislation,” are “ephemeral,” and that the rapid undoing of Trump’s biggest cruelties (no, really, Biden’s reestablishment of protections for Dreamers after Trump’s white nationalist agenda stripped those protections is explicitly chosen as example) “can set up a whipsaw effect” between presidencies.

Radicalizing government is bad, sniffs the Times in this of all moments. But Biden un-radicalizing it by reinstating the policies that existed before extremism ran amok is too much. Instead, the magical fairies of bipartisanship must suddenly appear, causing sensible legislation that a fully radicalized Republican Party has blocked relentlessly to somehow become unblocked, and Biden’s “legacy” now hinges on convincing a party that attempted to nullify his win by inventing hoax-based reasons for simply tossing out the votes from multiple states to instead un-radicalize so that fascist extremism and Obama-era technocracy can meet halfway and stop all the reporters of our land from feeling so itchy and uncomfortable in their current duties.

“Now is the time for the new president to show the American people what permanent change for a better nation can look like,” ends the Times, after giving absolutely no plausible path for that new president to get there.

Not to be outdone, The Washington Post has its own version. This one comes from the Post‘s Matt Viser, already making it a more courageous attempt than the Times’, and expresses more than anything a sort of vague press discontent at Biden’s current path of dull competence. It is in the rough spirit of 2016’s grumblings that candidate Hillary Clinton was perhaps “over-prepared” for a debate appearance: Yes, we all agree our leaders should be competent or even extraordinary, but too much competence, done too effortlessly, is always looked upon with suspicion. There are hints of book-learning afoot; will the public (or rather, the press) become bored and disenchanted with this incessant normality?

“The question to be answered in coming weeks, however, is whether Biden’s orderly presidency matches this moment of national urgency, and whether it’s sustainable in the face of multiple crises,” this version proposes.

Ah ha! Where the Times was unwilling to even contemplate whether facing multiple catastrophes at once might require more urgent action than waiting for the Bipartisanship Fairies to come hose down everyone involved, from insurrectionists and pandemic-deniers to the people that sternly disapprove of those things, here we have recognition that the nation is currently in Extremely Deep Poop, something that requires extraordinary urgency.

But is Biden being too orderly about it? Opinions differ!

Highlights of this version include: “It is unclear for now whether Biden’s more restrained style is an antidote or an overcorrection.” An “air of studious normality.”

“Biden himself said last week that the government was on a ‘wartime’ footing—then took the weekend off from public appearances.”

“Few of Biden’s social media messages have included anything that could be seen as controversial; rather, they often read like fortune cookies.”

Meanwhile at Axios, we are treated to a bipartisan list of each party’s “Mischief Makers.”

• On The One Side, Republican Marjorie Taylor Greene is listed, a conspiracy theory advocate who expressed support for assassinating lawmakers, gave out information on the whereabouts of the House Speaker during an assassination attempt, and stated her belief in a wide range of malevolent conspiracy theories ranging from a belief that a school shooting was a “false flag” hoax to seemingly every detail of “Q”-premised crackpottism.

• On The Other Side, Rep. Jamaal Bowman is marked for joining other Democrats in “voting against a waiver for retired Gen. Lloyd Austin to serve as Defense secretary.”

Ah yes. Troublemaking is truly bipartisan. Both parties have their travails, do they not?

So then, a week. It took the elite press about a week to begin fretting that returning to Biden-era policies may be just as divisive as Trump’s widespread smashing of those policies, and tut-tutting about the impetuousness of it all. It took a week for the press to wonder if Joe Biden is in fact being too boring after a presidency predicated on a loutish clown flinging mud and lies on an hourly basis swung too far in the other direction. It took about a week for Important Journalistic Neutrality to weigh in with a both sides take explaining that the supporters of insurrection may be a real thorn in the side of Republicans who still believe in at least pretending at decency, but Democrats have several members who disagree on policy concerns so, literally, Both Sides.

We’re still in a pandemic, by the way. There is a widespread movement on the right, supported by a majority of Republican lawmakers, to end U.S. democracy by force or by fiat. The last administration was such a cesspool of corruption in everything from “emoluments” to multiple Ukrainian scandals to pardon-fishing that it may take a decade to sort it all out. And climate change is, after a decade of delay, now absolutely assured to cause widespread global destruction—it can be mitigated at the edges, but it cannot be prevented.

But none of that is quite as important as the press getting back to the routine of pretending that none of that, really, is important or should take precedence over ephemeral notions that if the supporters of fascist coups and the supporters of competent technocracy can just find a middle ground, we can all shake hands and decide to cap things off at perhaps 2 million dead, and only some regions and states rendered unlivable, and a new arrangement that allows for democracy within limits, and assassinations or state-by-state coups here and there.

Just wait. It’ll get worse. Our American press has largely decided to deal with the radicalization of the Republican Party and the propagation of hoaxes not simply as a fringe propaganda tool but a party propaganda tool by pretending that it does not exist. Even after a president successfully goaded a mob of supporters into attacking lawmakers who were formalizing the win of his election opponent, there is no stomach to suppose that this is a new chapter in American life, one marked by continued demands that elections be done away with or new attacks to ensure the party’s enemies cannot cast votes. The press wants excitement, but not too much. It wants boring, but only as much as it can digest. It mostly wants stability, and columns that can write themselves from year to year with little acknowledgement of changing circumstance.

There is no stomach for recognizing the urgency of our current multiple crises, because it would require assigning blame—something no paper or network is willing to allow their journalists to pipe up with.