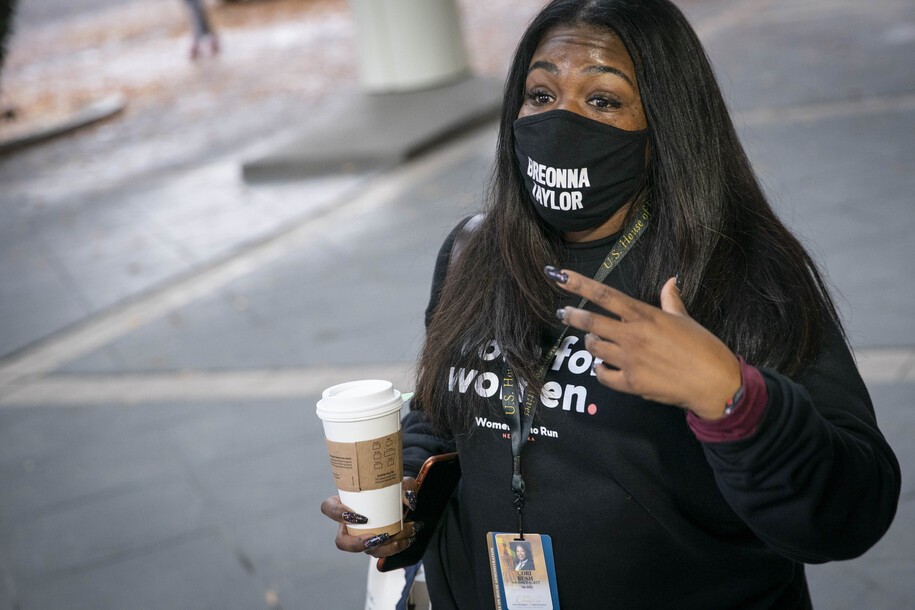 Rep. Cori Bush is changing offices to get away from Rep. Marjorie Taylor Greene, she tweeted Friday, after words were exchanged between the two congresswomen over mask-wearing in the Capitol. “A maskless Marjorie Taylor Greene & her staff berated me in a hallway. She targeted me & others on social media,” Bush wrote. “I’m moving my office away from hers for my team’s safety.”

There’s no question about that targeting people on social media thing. Greene has a long trail of winking at and liking and inciting violence all over social media, and her response to Bush highlights the tone she takes.

Greene replied by first repeating the attacks on Bush: “Rep. @CoriBush is the leader of the St. Louis Black Lives Matter terrorist mob who trespassed into a gated neighborhood to threaten the lives of the McCloskey’s.” Um, yeah. That’s not what happened and we all saw it. A group of activists got lost in a labyrinthine gated community and the McCloskeys, who were not in any way targeted or threatened, came out and waved guns around trying to look like bad-asses but in fact looking like jackasses.

Continuing on, Greene claimed “She is lying to you. She berated me. Maybe Rep. Bush didn’t realize I was live on video, but I have the receipts.” The video follows in her tweet. In it, Greene is walking around with her “censored” mask, ranting breathlessly about Black Lives Matter protesters, when someone—apparently Bush—calls out something about putting on a mask. Greene turns from her camera to scream in response, as a male voice can also be heard in the background—presumably a Greene staffer, and in a tone that fully earns “berated” as a description.

So … yeah, if that person telling Greene to put on her mask was indeed Cori Bush, sure, Bush made one comment to Greene. For breaking the rules and endangering other people’s health. Including Bush. And what was Bush supposed to do, come up close to Greene and get close enough to breathe in her fumes while pleading gently for her to do the thing she was supposed to be doing all along? That would no doubt be as successful as getting Greene and other Republicans to wear masks in lockdown during the January 6 attack on the Capitol, when following their refusal to wear masks, several members tested positive for COVID-19. Or as successful as efforts to get Greene and other Republicans to go through metal detectors when entering the House chamber, thanks to those who’ve wanted to carry guns there in violation of the rules. That effort yielded a string of Republican temper tantrums that left Bush asking “Have they ever had a job before?”

Bush once again shows her courage here. Marjorie Taylor Greene is dangerous, and her followers are dangerous. Confronting her over anything is a risk—but not confronting her will only embolden her. Greene thinks she can get away with anything she wants, no matter how vile or disgusting or harmful. Someone needs to tell her she can’t, and her Republican leadership sure isn’t doing it. Taking that on—both to say “You don’t get to break the rules with impunity” and to protect everyone around the huffing, panting, ranting Greene—shouldn’t have fallen to Bush, but it did, and she did it.

On Jan. 13 — after members tested positive for COVID-19 after being locked down with her on Jan. 6 — Marjorie Taylor Greene came up from behind me, loud and unmasked. I called out to her to put hers on. Her staff yelled at me, “Stop inciting violence with Black Lives Matter.” pic.twitter.com/GtN5AmGrkO