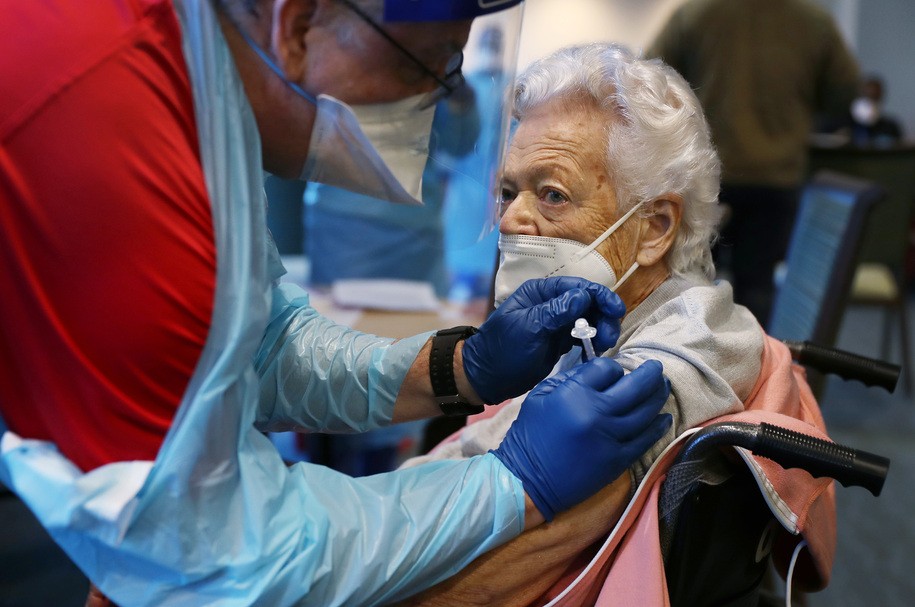 As the novel coronavirus continues to spread across the country, states across the U.S. have continuously underreported infections. As Daily Kos’s Mark Sumner notes, there has been an “urge to undercount what’s happening with COVID-19” since the beginning of the pandemic. Whether that’s because officials are attempting to look like they have more control over the situation than they actually do, or because of the confusion associated with how to handle the pandemic is unclear. While Florida has repeatedly come under scrutiny for underreporting infection numbers and deaths tied to the coronavirus, it turns out New York may also have significantly higher COVID-19 deaths than its official numbers indicate.

A report released Thursday by New York’s attorney general accuses Gov. Andrew Cuomo of undercounting COVID-19 deaths in nursing homes by thousands. According to the 76-page report, an undercount of more than 50% was found as a result of New York counting residents who died on nursing home property and not those who later died in hospitals. According to the Associated Press, New York is the only state to do this. As a result, the report concluded the state’s official count of 8,711 nursing home deaths is actually about 13,000, making New York the state with the highest number of COVID-19-related nursing home deaths.

“Preliminary data obtained by O.A.G. suggests that many nursing home residents died from Covid-19 in hospitals after being transferred from their nursing homes, which is not reflected in D.O.H.’s published total nursing home death data,” the attorney general’s office wrote in a summary of the report.

A significant portion of COVID-19 deaths since the first reported case in the U.S. have been tied to long-term care facilities, according to The New York Times. Since the start of the novel coronavirus pandemic, nursing homes and assisted living facilities across the nation have been the most vulnerable due to a lack of supplies, insufficient health care, inability to social distance, and dearth of testing. Calls to better support these facilities have been ongoing since early 2020. More than 60 of the state’s 600 facilities were investigated by the attorney general prior to the report to compare the number of deaths reported by the state’s Department of Health and those by the facilities themselves.

An investigation by the Associated Press in May 2020 found that despite concerns of spread, Cuomo’s administration ordered more than 4,000 COVID-19-recovering patients back to nursing homes. Additionally, in a report published in July, the administration argued that deaths, as a result, did not contribute to the count because they “were no longer contagious when admitted and therefore were not a source of infection.”

The attorney general’s report follows Cuomo’s consistent claims that New York has handled the virus in the best way possible and has controlled its outbreak, despite a political “blame game” that he disregarded nursing homes.

“There’s also no doubt that we’re in this hyper-political environment so everybody wants to point fingers,” Cuomo told CBS This Morning in October. “New York, actually, we’re number 46 out of 50 in terms of percentage of deaths in nursing homes … it’s not a predominantly New York problem.”

Still, thousands of families believed their loved ones were not counted in order to uphold the governor’s image as a hero.

“It’s important to me that my mom was counted,” said Vivian Zayas, whose 78-year-old mother died in April after contracting COVID-19 at a nursing home. “Families like mine knew these numbers were not correct.”

While Cuomo himself has not yet released a statement, New York Health Commissioner Howard Zucker took issue with the report’s conclusion that the number of nursing home deaths in the state are “undercounted.”

“The word ‘undercount’ implies there are more total fatalities than have been reported; this is factually wrong,” Zucker said in a statement. “In fact, the OAG report itself repudiates the suggestion that there was any ‘undercount’ of the total death number.”

“There is no satisfaction in pointing out inaccuracies; every death to this terrible disease is tragic,” Zucker added. “We will review the remainder of the recommendations as we continue to fight with every resource and asset to protect all New Yorkers from the scourge of COVID.”

The exact number of deaths related to COVID-19 in the state is still unclear, resulting in criticism from both health officials and lawmakers on why it is taking so long to compile clear data. While the attorney general’s report examined nursing home statistics compared to state tallies, only a fraction of the state’s nursing homes were audited—thus, a full death toll is still unknown. NBC News noted that state senators including Gustavo Rivera have been requesting nursing home death toll data for months.

“It makes me angry that they weren’t transparent from the start. Each death that goes unaccounted for is someone’s loved one,” said Gelsey Randazzo Markese. According to NBC News, Markese spent months pushing for essential caregiver visits to see her 91-year-old grandmother.

“It’s important to have the number so people can see how shocking it is,” Markese said. “So we can move forward and gain closure from this chapter — and figure out what we can do to prevent this from happening again.”

Overall, the report sheds light on the ongoing issues facing nursing homes and long-term care facilities due to obstacles including an insufficient supply of healthcare items, like personal protective equipment. Understanding why residents of these facilities suffered at an alarming rate is essential to combating future issues should they arise. “While we cannot bring back the individuals we lost to this crisis, this report seeks to offer transparency that the public deserves,” New York Attorney General Letitia James said in a statement.

When initially published this article did not include Cuomo’s response to the allegations that COVID-19 related nursing home deaths were severely underreported.

He later issued the following statement in response: