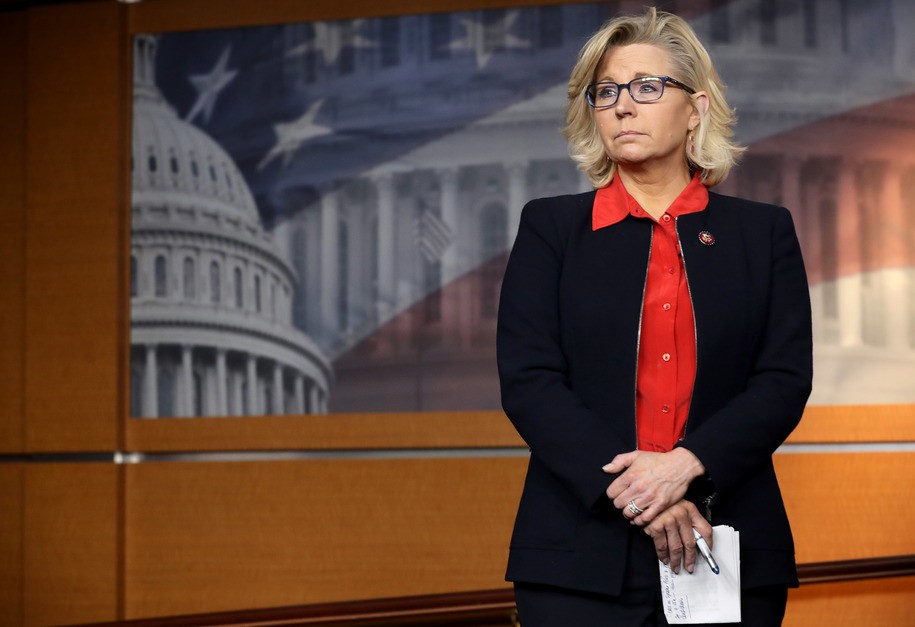 The news isn’t good for Rep. Liz Cheney of Wyoming, who dared admit the truth that Donald Trump’s insurrection at the Capitol was the greatest “betrayal” by any commander in chief in American history.

On Thursday, House Minority Leader Kevin McCarthy traveled to Mar-a-Lago to suck up to the guy who tried to have him and his fellow lawmakers killed. “United and ready to win in ’22,” McCarthy tweeted following his meeting with Trump, referring to the GOP effort to reclaim the House majority.

As McCarthy chummed it up with Trump in Florida, pet Trump seditionist and Sunshine State representative Matt Gaetz jetted off to Cheney’s home state to rail against her reelection. “Defeat Liz Cheney in this upcoming election, and Wyoming will bring Washington to its knees,” Gaetz told hundreds of mostly maskless attendees.

Gaetz topped off his Cheney hate tour Thursday night with a hit on Fox News in which he urged McCarthy to put Cheney’s leadership post within the GOP caucus up for a vote.

“Kevin McCarthy needs to hold a vote on Liz Cheney,” Gaetz told Fox host Tucker Carlson. “And if he doesn’t, the Republican Conference is a total joke. More than half of the Republican conference has said that this person does not speak for us.”

But while McCarthy and Gaetz line up to do Trump’s revenge bidding, House Republicans have been burying their heads in the sand about their very own pro-assassination QAnoner and ‘space laser’ enthusiast Marjorie Taylor Greene of Georgia.

Greene has been trying to systematically erase her dark trail of social media posts in which, for instance, she promoted executing House Speaker Nancy Pelosi and called Parkland school shooting survivor and gun control activist David Hogg a “coward,” suggesting he was being “paid to do this.” Greene is also a Sandy Hook Elementary School shooting denier, claiming the horrific mass shooting that took the lives of 27 victims—including 20 children—was staged.

Hogg had urged McCarthy over Twitter to deny Greene any committee placements given her reprehensible behavior, not to mention her unfitness for office. In a separate post, he also explained the horror of a group of teenaged shooting survivors being harassed by a 44-year-old woman.

”In that video you see a group of people most of whom are 18 or 19 acting calm cool and collected,” he wrote, “what you don’t see are the sleepless nights, the flashbacks, the hyper vigilance and deep pitch black numbness so many of us feel living in a society [where] we are told our friends dying doesn’t matter.”

“What could they be thinking?” Pelosi asked on Wednesday. “Or is thinking too generous a word for what they might be doing? It’s absolutely appalling, and I think the focus has to be on the Republican leadership of this House of Representatives for the disregard they have for the death of those children.”

Mark Barden and Nicole Hockley, who lost their children Daniel Barden and Dylan Hockley respectively in the Sandy Hook shooting, called Greene’s placement on the committee “an attack on any and every family whose loved ones were murdered in mass shootings that have now become fodder for hoaxers.”

Any party that hadn’t been infiltrated by homegrown domestic terrorists might be turning its attention to expelling Greene from their midst rather than giving her a bigger platform. Instead, House Republicans are fixated on a debate around demoting Cheney for telling the truth and ousting her from Congress altogether.

It’s not good news for Cheney—but it’s even worse news for America.