QAnon is just another word for Nazi, and Rep. Marjorie Taylor Greene is making that very, very clear 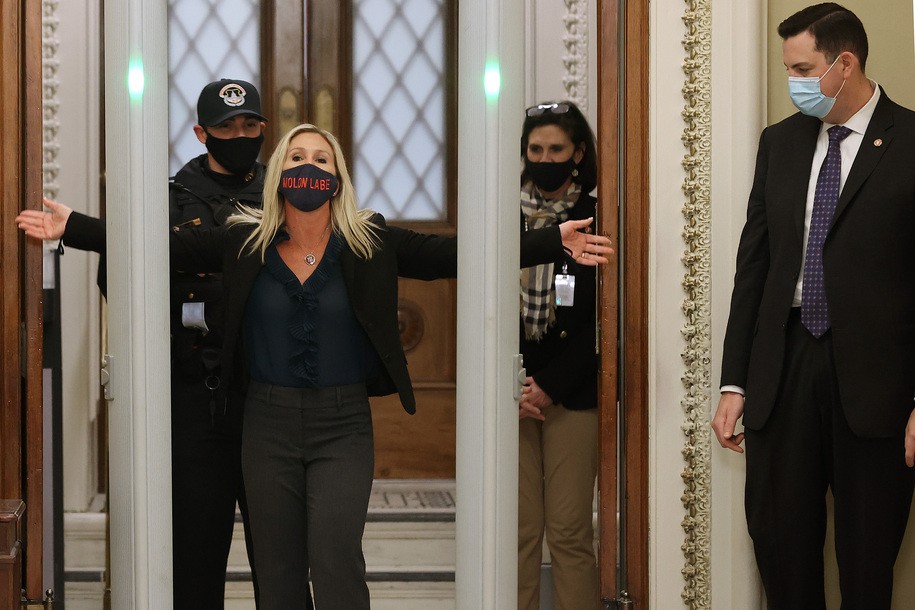 Over the past few days, Republican Rep. Marjorie Taylor Greene has embraced a kind of online minimalism. She’s been throwing away her old tweets and other social media posts by the truckload, cleaning out years’ worth of statements. That’s not because the Georgia representative has adopted a clean modern aesthetic. It’s because a casual browse through her statements showcased racism, violence, and a rabid anti-Semitism that is generating calls for her expulsion from Congress.

It’s not just that her Facebook page called for the murder of her House colleagues. It’s not just that her videos included claims that the mass shooting at Parkland High School was a “false flag” and the students were “paid actors.” It’s not just that her support for QAnon involves repeatedly making statements in support of the worst of the Pizzagate conspiracy theory. On Thursday, Media Matters surfaced Greene’s writings on how the California wildfires were caused by blasts from a space-based laser weapon. And not just any space laser, but a space laser launched by a solar power company secretly under the control of the Rothschild family.

As silly as that sounds, what Greene wrote underscores—again—the relationship between QAnon and anti-Semitism. That’s because, as Just Security wrote back in September, QAnon is a Nazi cult.

Taylor Greene’s claims about space lasers are a perfect illustration of one of the many threads that weave together to make QAnon. The claim ties together solar power company Solaren, former California Gov. Jerry Brown, and the Rothschild family in a conspiracy that uses a space laser to blast the California countryside, creating an emergency and manipulating stock prices. In other words, it’s environmentalists, Democrats, and Jews faking climate change for their own profit. As QAnon claims go, one could scarcely do better. The attention from the post was enough that Solaren was forced to make it clear they don’t own any satellites.

Like every other QAnon belief, it’s easy to look at Marjorie Taylor Greene’s Jewish space laser as foolish. Because it was. It is. But it’s not harmless.

From the beginning, QAnon has been rooted in Pizzagate, and Pizzagate is nothing more than an update of the Blood Libel. As The New Republic wrote last fall, claims about how Jews were murdering Christian children for use in rituals have become “more baroque and more codified” over centuries. But there is a direct and horribly clear trail that goes back at least 900 years in making claims about Jews trafficking in the blood and flesh of children. These anti-Semitic conspiracy theories have been used to justify pogroms, persecution, and holocaust. And as of Jan. 6, they’ve also been used to justify storming the U.S. Capitol.

Historians have made clear that QAnon is just another iteration of the “nocturnal ritual fantasy” in which some group is accused of “perverse, ritualistic behaviors that target innocents.” Once people are placed in the category that supports or benefits from such behavior, then any action against them is licensed. After all, why not call for the murder of Democratic politicians … if they’re baby-eating Satanists under the control of a secret Jewish cabal?

As Just Security put it:

A secret cabal is taking over the world. They kidnap children, slaughter, and eat them to gain power from their blood. They control high positions in government, banks, international finance, the news media, and the church. They want to disarm the police. They promote homosexuality and pedophilia. They plan to mongrelize the white race so it will lose its essential power.

If that sounds familiar, it’s because it’s lifted straight from the most influential anti-Semitic work of all time, The Protocols of the Elders of Zion. Published in 1902, it was a core document for building the Nazi movement in the decades before World War II.

It’s also no different from what Marjorie Taylor Greene and other followers of QAnon are pushing. The whole purpose of QAnon is to draw a line around people who are so other, that any action at all—even erecting a gallows on the Capitol lawn—can be justified. That these lines always include mentions of items straight from the Blood Libel, or invocations of the Rothschild family, or claims about George Soros is absolutely not a coincidence. QAnon could not exist without its anti-Semitic core.

Taylor Greene’s space lasers may sound completely ridiculous. The idea that there are tunnels beneath Washington, D.C., through which captive children are ferried based on coded orders to the Comet Ping Pong pizzeria is ridiculous. The idea that George Soros is funding antifa buses to prowl around the nation is ridiculous. But ridiculous is not harmless. The Voltaire quote “Anyone who has the power to make you believe absurdities has the power to make you commit atrocities” has been common around social media for a reason. Donald Trump understands that power. Joseph Goebbels understood that power.

There has been a grand semantic debate over the past four years about whether Trump’s brand of white nationalist authoritarianism really deserved the label of fascism. But when QAnon’s blatant anti-Semitism is added to that core, there should be no question about the results. That’s Nazism.

It may be ludicrous. But it’s certainly not funny.