The creep of QAnon: A small Puget Sound town feels the political effects of authoritarian cult 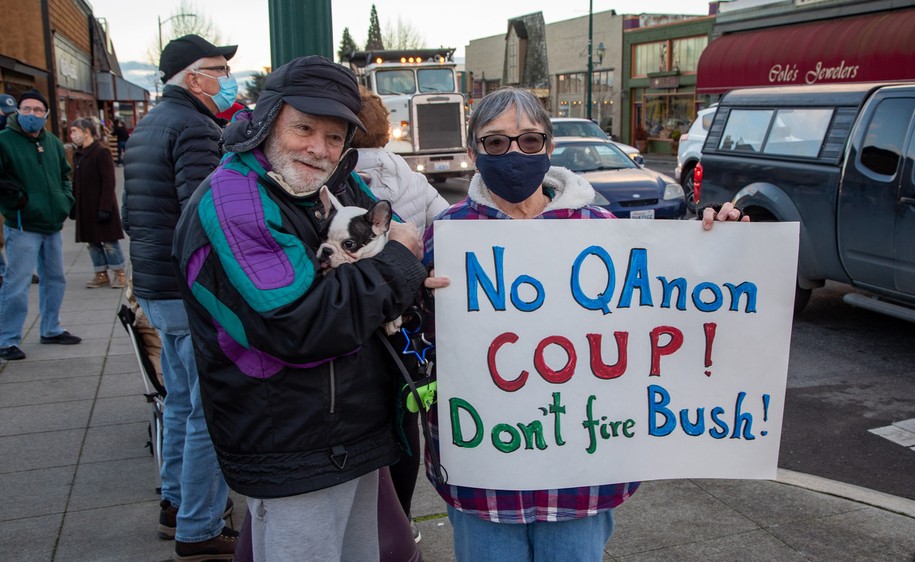 Sequim, Washington, is one of those classically quaint little Puget Sound towns: gorgeous scenery (near both the Dungeness Spit—native waters of the crab of the same name—and the Olympic Mountains), quirky (best known for both having low rainfall and a high retiree population), and a Native American name (pronounced “skwim”). Now it will be known for something else: a town of 7,000 run by a QAnon-loving mayor who engineered a takeover this month with the help of a compliant city council.

The mayor, a biker named Bill Armacost who runs a local hair salon, forced the resignation of Sequim City Manager Charlie Bush this month through a series of closed-door executive sessions—apparently fueled, as Will Sommer reports for Daily Beast, by Armacost’s ardent promotion of the QAnon conspiracy theories as well his arch-conservative views that clashed with Bush’s handling of the city during the COVID-19 pandemic.

At a recent city council meeting following the ouster, a city resident named Josh—with the Jan. 6 assault on the U.S. Capitol evidently on his mind—ironically asked Armacost during a Zoom council session if he would kindly not join any new QAnon insurrections.

Armacost faced questioning about his QAnon beliefs from several audience members. “Do you still stand behind your belief that QAnon is a truth movement?” asked Marsha Maguire, a frequent critic. He made no replies to any of these queries.

Sequim operates with a “weak mayor” system in which the day to day operations are run by a city manager who answers to the elected city council. The mayor is chosen from among council members, and in Sequim, the position has largely been ceremonial.

That tradition apparently ended earlier this month when Armacost abruptly and angrily demanded a closed-door executive session, the outcome of which was that the council voted to demand Bush’s resignation—without any clear explanation why. Bush is widely well regarded both among city residents and his fellow local government officials in Clallam County, largely because the city has run smoothly on his seven-year watch, and more recently because he is believed to have been a highly effective administrator during the pandemic.

But he appears to have gotten sideways with Armacost this past year, and the mayor’s ardent support of QAnon conspiracy theories played a leading role.

Armacost made a splash in late August when he began discussing QAnon theories on a regular city-sponsored radio show called “Coffee with the Mayor.”

“QAnon is a truth movement that encourages you to think for yourself,” Armacost said. “If you remove Q from that equation, it’s patriots from all over the world fighting for humanity, truth, freedom, and saving children and others from human trafficking.”

The mayor then went on to urge listeners to check out a slick QAnon video on YouTube, and also urged them to check out both the videos and the (since-deleted) Twitter account of a prominent QAnon promoter named “Joe M.”

The episode created a local furor. “He believes that what he believes is the only truth, and he doesn’t care that the majority of his citizens don’t believe that,” local resident Shenna Younger told KING-5 TV. “He doesn’t represent us.”

Bush intervened, and he and Armacost issued a joint statement in which the mayor apologized for using a city-run radio show to platform his political views. Bush said Armacost had “commented on national politics that have nothing to do with the City of Sequim,” adding that “any responses to questions reflecting the personal opinion of the mayor do not reflect policy positions of the Sequim City Council or the organization.”

Armacost, who calls himself a “Warrior for Christ” on his Facebook page, is also an active biker who traveled to South Dakota during the pandemic this summer to attend the annual Sturgis Motorcycle Rally, a massive gathering that draws 500,000 and turned into a COVID-19 superspreader event believed to have resulted in 260,000 nationwide infections afterwards. When he returned, he immediately reopened his salon, ignoring recommendations for a two-week quarantine.

When Sequim residents began making it an issue, he responded with a letter to the editor of the local paper saying, “It is not required of me either by science, regulation, experience or custom,” and dismissing critics as people “addicted” to fear:

Love demands that I take reasonable personal precautions on behalf of my fellow citizens. In my shop. I have implemented common sense protocols for the protection of my customers and the community. Love also requires that I refuse to enable the addiction of others. The addict commands that others indulge his or her addiction in the name of caring or compassion. Love commands that I refuse the addict of the passion so craved.

Bush also was at odds with Armacost over the placement of an opioid treatment center in downtown Sequim. A local hardcore conservative faction called Save Our Sequim, aligned with Armacost, has hysterically attacked plans for the Medically Assisted Treatment (MAT) facility planned by the Jamestown S’Klallam Tribe, claiming it would “forever change the rural character of our town.” Bush, however, did not oppose permits for the new facility, so Save Our Sequim demanded his resignation because of it this summer.

A gathering of about 100 Sequim area residents turned out Monday for a rally in Bush’s defense. Most of those protesting the forced resignation believed that the political engineering was similar to what they had seen from QAnon followers in the Capitol on Jan. 6: a naked power grab.

The rally was organized by the Sequim Good Governance League, which submitted a petition with 1,239 signatures urging the city council to retain Bush. Many voiced their belief that Armacost’s far-right political beliefs were fueling the purge. One sign read: “No QAnon Coup! Don’t fire Bush!”

Armacost’s embrace of QAnon goes back to at least 2019, when he began including the “WWG1WGA” hashtag—a reference to the QAnon slogan “Where we go one, we go all”—on his Facebook page. A December 2019 post featured a QAnon YouTube video that claimed the world had been under the control of “Luciferians,” with a cover showing satanic hands encircling the U.S. Capitol dome. He also posted a “must watch” video claiming that John F. Kennedy Jr. was secretly alive and about to join forces with Donald Trump, another QAnon favorite.

“He is QAnon completely,” Maguire told Sommer. “He’s not wavering, he’s down the rabbit hole and all that.”

“I was personally very sorry to hear that,” Ozias said at the Jan. 12 commission meeting. “His engagement and leadership on any number of issues that the county and the city have collaborated on has been really important, and I’m very grateful for that. I would most especially highlight the leadership that Charlie has shown over the last year or so with regard to the COVID pandemic, the response to it and his leadership of the child care subgroup for our CARES allocations just as a couple of examples of the really important work that he’s done.

“I in no way support the decision to request Mr. Bush’s resignation. Mr. Bush has done nothing wrong, in my opinion, and he should remain at the helm of the city. Mr. Bush came back to the city to help aid us through a pandemic, when it wasn’t required of him. He has demonstrated true leadership time and time again for the citizens of Sequim. As city councilors, we have an opportunity to affect change in a way that others in our community do not which comes with significant responsibility to act in a fair, transparent and ethical way.”

The tide of support for Bush, however, fell on deaf ears: On Monday, ignoring the protest earlier that day, the council majority voted to accept Bush’s severance package. Two of the five council members attempted to force a reconsideration, but Armacost and his two chief allies on the council outvoted them after yet another closed-door executive session. Bush has not yet signed the agreement.

Armacost brushed off his critics, noting that his email inbox had been inundated, but it only reminded him of “a certain group of individuals sharing their thoughts.”

“We’re in a democracy and that’s a beautiful thing. That is why we have public input,” Armacost commented. “However, if we’re going to stick to a rule of order, this should have been brought up at the beginning or prior to the session beginning. (There’s been) ample opportunity to add this to the agenda.”

“We want to let Charlie know that his community is behind him, and he’s a great city manager,” Younger told the Peninsula Daily News. “This community is not OK with the actions of our City Council.”