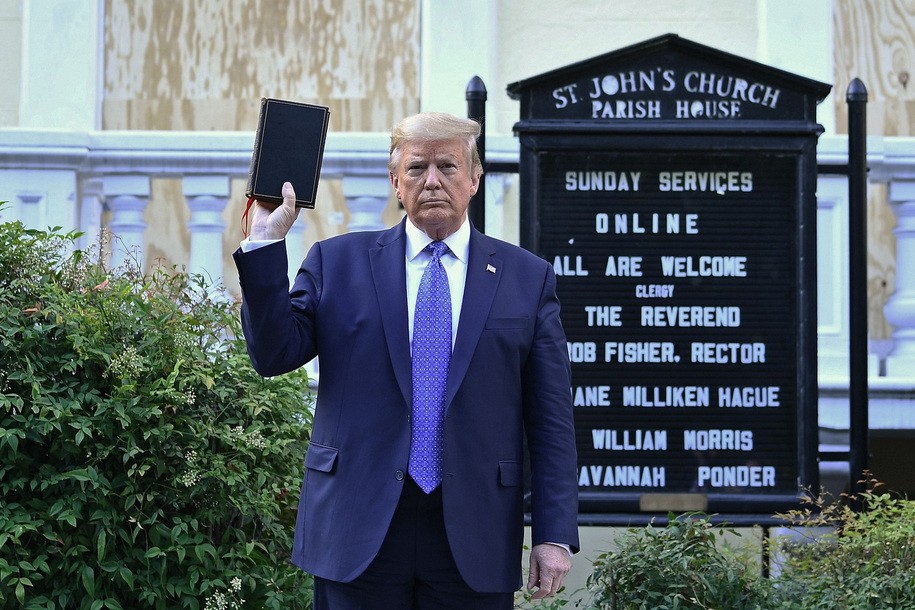 A new PBS Frontline episode entitled “Trump’s American Carnage” was released Tuesday. Produced in the wake of the Jan. 6 insurrection, it describes and illustrates in detail how Donald Trump’s ascent from candidate to Oval Office occupant prefigured the violence that ultimately erupted, finally boiling over in our nation’s Capitol.

It includes interviews with Trump allies such as Corey Lewandowski, Roger Stone, and Steve Bannon, as well as several former Republican senators, including Bob Corker, Jeff Flake, and former Republican House members Eric Cantor and Paul Ryan. (Evidently the subject matter was too uncomfortable for the current GOP members of Congress.) Several journalists who have covered Trump—including Peter Baker of The New York Times,  Darlene Superville of the Associated Press, Susan Glasser of the New Yorker, as well as author Wesley Lowery—are interviewed as well.

The Frontline episode focuses on how Trump deliberately stoked and promoted anger and violence among his supporters during his entire term in office, violence that most visibly manifested itself on Jan. 6 at the U.S. Capitol, with Republicans falling in line behind these tactics for the most part. The pivotal events in Charlottesville in 2018 are described as something of an inflection point—the moment when Trump felt he could say or do anything without any serious repercussions. From then on, the Republican Party wholly capitulated to Trump’s ownership and dominance.

In one particularly damning sequence, “Carnage” shows how even those GOP elected officials who Trump had viciously attacked still cheered him on at the passage of the 2017 Republican tax cut, his sole legislative achievement while in office. Sen. Mitch McConnell and former senator Orrin Hatch are singled out for their particularly craven displays of obsequiousness during the White House’s celebratory announcement of that bill’s passage, while former vice president Mike Pence is quite accurately portrayed as fawning lapdog. Neither Trump’s overt displays of racism nor his vile behavior would earn him any public criticism from Republicans after that, and his total control of the party only further emboldened him.

“Carnage” depicts how Trump, feeling himself to be all-powerful, focused on immigration in order to enrage his supporters and cement a winning issue for the 2020 campaign. Experiencing no real negative reaction from fellow Republicans for his “zero tolerance” and child separation polices, Trump then directed his attention towards Democrats who could conceivably challenge him. The effort to discredit Joe Biden by attempting to extort “dirt” on Biden’s son Hunter, which ultimately led to Trump’s first impeachment, grew out of these same feelings of absolute power. After he was impeached and the Senate, again led by McConnell, refused to convict, Trump felt himself to be totally invulnerable, and his behavior worsened as a result, just as impeachment manager Adam Schiff said it would. As Evan Osnos of the New Yorker puts it, “ At that point all the guardrails fell away. He had nothing to be afraid of at that point—he could do whatever he wanted.”

“Whatever he wanted” was what followed. From the wanton teargassing of peaceful Black Lives Matter protesters in Lafayette Square for the infamous Bible photo op to his disastrous, careless handling of the COVID-19 pandemic, Trump displayed a pattern of reckless and deliberate disregard for anything but his own political fortunes, with virtually no pushback whatsoever from elected Republicans.

The documentary is most effective at portraying the moral bankruptcy of the Republican Party that enabled this abomination for four years; the same Republicans who continue to enable and excuse Trump to this day. Even as the pandemic surged, Trump is shown continuing to incite his followers to “rise up” against Republican governors who implemented social distancing measures and business closures. Reaction from the GOP was again nonexistent. It was these incited far-right protests at state capitols that most captivated him, and “Carnage” convincingly shows that this was the moment when the idea of fostering an entire insurrection—led by his far-right allies—began to take hold in his mind.

The violence in Trump’s rhetoric had always been implicit, but it became more and more pronounced and practiced as he began to directly incite his followers, courting extremist groups like the Proud Boys, militias, and other neo-Nazis and white supremacists. As the election approached, Trump portrayed himself as being “under attack” more and more, which had the effect of convincing his far-right base that they too were being attacked. And yet, despite the violence that was occurring throughout the country as a result of this incitement, Republicans still did nothing. The documentary emphasizes the cowardice and enabling of McConnell and Pence in particular.

Finally, the election arrives and Trump shifts fully into his full-frontal assault on our electoral process. A nonstop barrage of conspiracy theories, calculated to further incite his followers, begins in earnest. The final 15 minutes of “Carnage” depicts these efforts in detail, and in particular how Republican legislators supported this effort to convince Trump’s supporters that the election was stolen (House Minority Leader Kevin McCarthy was particularly venal), culminating in the insurrection on Jan. 6.

“Carnage” closes with a stark warning from conservative Charlie Sykes, emphasizing that what Trump did to incite the insurrection is still happening: People continue to believe his lies, and he has provided a template for future politicians to do the same. “Trump’s American Carnage” is a portrait of a monster, and a searing indictment of those Republicans who enabled him to do what he did throughout the last four years.

Watch entire episode is below.