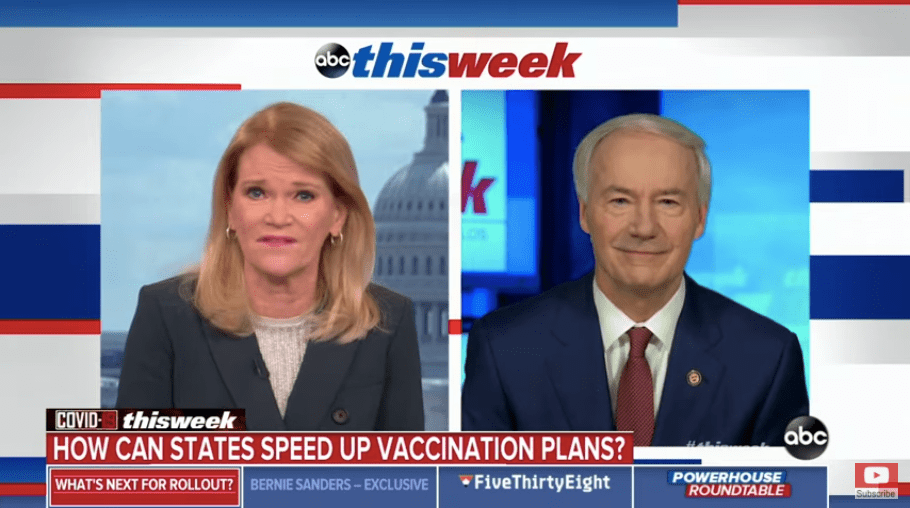 Arkansas Governor Asa Hutchinson appeared on ABC News’ This Week to chat with host Martha Raddatz about vaccine distribution in Arkansas, President Joe Biden’s coronavirus response, and, yes, newly-elected right-wing Republican Rep. Marjorie Taylor Greene of Georgia. Raddatz brought up the important point that Greene has, among other things, indicated support for executing House Speaker Nancy Pelosi, among other Democrats (after backlash, Greene offered up a weak statement on Twitter saying many people have run her social media pages, and that not all liked or shared posts represent her views). Raddatz’s question to Hutchinson should have been an easy one to answer. “Given her history, is she fit to serve?” Raddatz asked.

Unsurprisingly, but still, disappointingly, Hutchinson offered up a wishy-washy non-answer. “I’m not going to answer that question as to whether she’s fit to serve because she believes in something that everybody else does not accept. I reject that,” Hutchinson stated. He also stressed that she was elected by people in her district and, in his view, “that should mean a lot.”

“But she’s going to stand for reelection,” Hutchinson added. “I don’t think we ought to punish people from a disciplinary standpoint or party standpoint because they think something a little bit different.” Then Hutchinson went on to stress that he doesn’t want the party torn apart or divided. Imagine if unifying parties didn’t involve making nice with openly QAnon conspiracy theorists?

Raddatz pressed Hutchinson, clarifying that Greene’s belief in conspiracy theories—one of which, as Raddatz referenced, includes the hysteria that pedophiles run Washington, D.C.—is not merely a matter of believing something a “little bit different.”

Hutchinson said he rejected that and said he “would not vote for her.”

In reference to Trump, Hutchinson said just earlier this January that the Republican Party would have to do some “soul searching.” Apparently, soul searching doesn’t involve disciplining (if not expelling) a legislator who voices support for executing a fellow lawmaker (or frankly, for executing anyone).

As Daily Kos has covered, Greene is was recently seen in a viral video harassing Parkland shooting survivor (who, at the time, was still a teenager). Relatedly, Facebook comments of Greene agreeing with people that the Parkland massacre was a “false flag” have garnered support for her resignation. Democratic Rep. Cori Bush recently said she had to move her office in the Capitol because of Greene. Greene is also a 9/11 truther. Twitter recently temporarily suspended her account over false election claims. Greene (incorrectly) blamed left-wing groups for the violent insurgency at the U.S. Capitol on Jan. 6. There’s more than enough evidence for Republicans to agree that Greene should be expelled from public office.

You can check out the full clip of Hutchinson’s interview below, courtesy of YouTube.