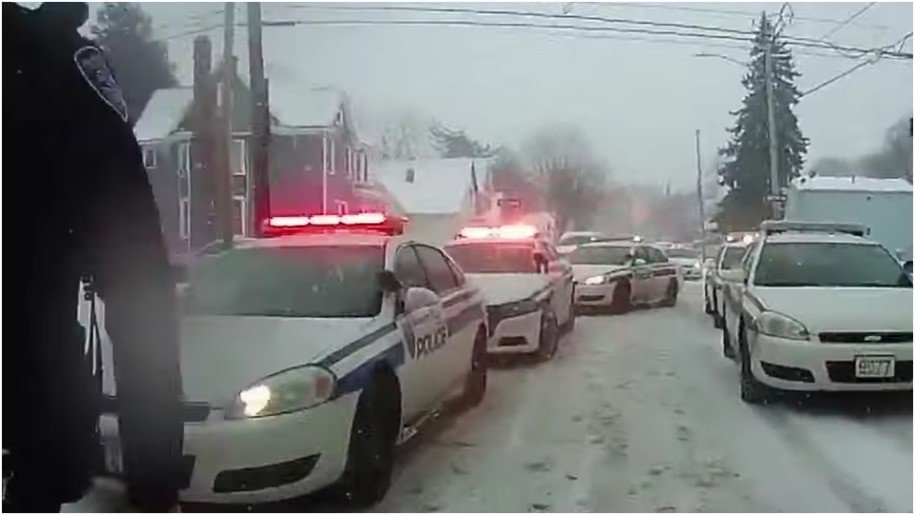 Body camera footage released Sunday shows Rochester, New York, police officers handcuffing and pepper-spraying a 9-year-old Black girl who refused to sit in one of the officer’s cars. “You’re acting like a child,” one of the officers told the girl at one point during the detainment on Friday. “I am a child,” she responded.

Rochester police were responding to a report of “family trouble” when they arrived to find the child threatening suicide, Deputy Police Chief Andre Anderson said during a Sunday press conference. “She indicated that she wanted to kill herself, and she wanted to kill her mom,” he said. “And she was just upset.”

The footage began just before one of the officers spotted the girl and started to chase her, soon catching up to her. “No,” she can be heard saying as the officer grabbed her arm and told her to stop. “No,” she said again. “Ow, my arm.” She told the officer to get off of her and he asked, “What’s going on?” It didn’t take long for the child’s mother to join them, at which point the situation escalated to screams and profanity. Officers tried repeatedly to get the child into one of their cars. “I want my dad,” she yelled and told officers to stop. “Get in the car. I’m done telling you,” the cop said at one point. Later in the encounter, an officer told one of his peers, “Just spray her at this point.”

New York Attorney General Letitia James tweeted on Monday that her office is looking into what transpired “but it’s clear that drastic reform is needed” at the Rochester Police Department. “What happened in Rochester on Friday is deeply disturbing and wholly unacceptable,” James said in the tweet. “Such use of force and pepper spray should never be deployed against a child, period.” Rochester Mayor Lovely Warren, who has a 10-year-old daughter, said during the news conference that as a mother, the video is nothing you want to see. “I saw my baby’s face in her face,” she said.

“This is not something that any of us should want to justify, can justify,” Warren added. “And it is something we have to change.”

Interim Police Chief Cynthia Herriott-Sullivan called the officer’s actions unacceptable at the news conference. “I’m not going to stand here and tell you that for a 9-year-old to have to be pepper-sprayed is okay. It’s not,” she said. “I don’t see that as who we are as a department.”

WARNING: This video contains graphic content that may be triggering for viewers.

This isn’t the police department’s first accusation of excessive force. Daniel Prude, a Black man, suffocated to death on March 23, 2020 after Rochester officers put a hood over his head. Prude was naked, unarmed, and having a “mental health crisis,” according to his brother who called 911. Police Chief La’Ron Singletary retired after that incident.

Rev. Lewis Stewart of United Christian Leadership Ministry said during a news conference on Monday that Rochester police entrenched in a “warrior culture” again mishandled a person in need of mental health and social work intervention. “Rochester police officers should not have engaged this child as though she was a criminal,” Stewart said. He called for a thorough investigation and for officers involved to be suspended without pay.

“The officer who became frustrated and stated ‘just spray her’ obviously demonstrates the inhumanity of some cops when dealing with the lives of Black people,” Stewart said during the news conference. The reverend asked an essential question: “Would RPD have acted in such a way if the child was white?”