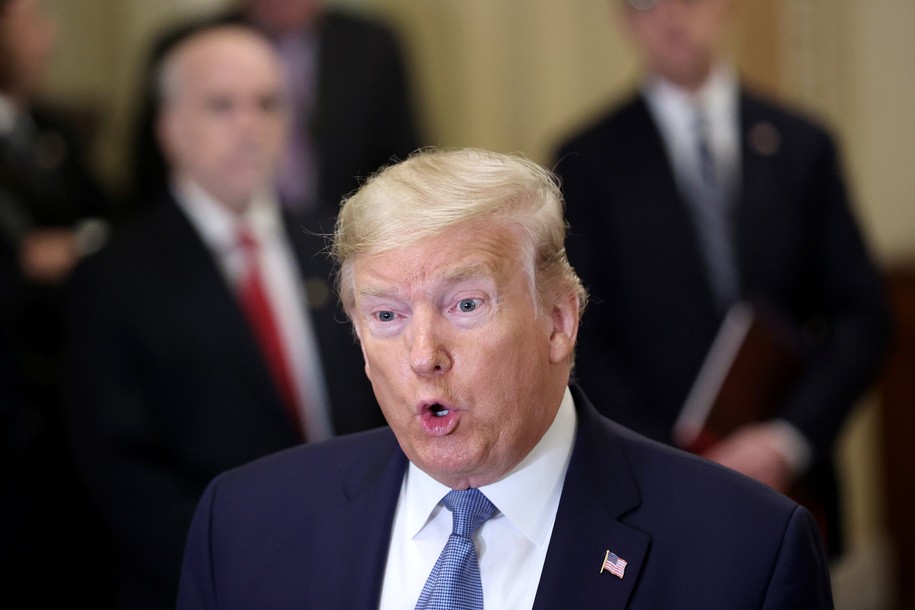 On Tuesday, Donald Trump’s legal team made their official response to the article of impeachment delivered by House impeachment managers. Though it might easily have been misdirected since that response is actually written to the “Unites States Senate.” This follows earlier filings by Trump’s legal team to the “United States Districct Court,” the “Northern Distrcoit of Georgia,” and the “Eastern Distrct of Michigan.”

But while the opening words of Trump’s reply may generate a chuckle or an eye roll, it’s really the last section of that response that’s the most laughable. And the most infuriating. Because after providing three replies in which the argument focuses on the question of whether it is considered constitutional to impeach an executive once they’re out of office, the last answer that Trump provides goes directly back to square one by claiming that he never did anything wrong in the first place and that: “Insufficient evidence exists upon which a reasonable jurist could conclude that the 45th president’s statements were accurate or not, and he therefore denies that they were false.”

That’s right. A month after he drove a mob into a murderous rage, Trump isn’t just denying he incited their assault on the Capitol. He’s denying he lied.

In the early hours of Nov. 4, as it was becoming clear to everyone that Joe Biden was going to collect far more than the 270 electoral votes necessary to secure victory, Trump stepped in front of the cameras to complain.  In that appearance, Trump said: “We were getting ready to win this election. Frankly, we did win this election.”

That’s a lie. Had Trump constrained himself to no more than such generalized statements, he might still have generated a sense of righteous anger and disappointment among his supporters, but it’s unlikely that would have created the kind rage that led to Jan. 6. However, Trump didn’t hold himself to the just a generic claim of victory.

By Nov. 7, shortly after the Associated Press called the election for Biden, Trump was back on the air to make a statement that leveled the first of many specific charges. “The Biden campaign … wants ballots counted even if they are fraudulent, manufactured, or cast by ineligible or deceased voters.” All of those charges would persist right up until Jan. 6, with Trump’s team eventually assigning numbers to each category—8,000 dead voters, 14,000 out-of-state voters, 10,000 late ballots—without ever explaining where they obtained these values.

Over the course of the following months, Trump added more specific charges. He claimed that there were fraudulent drop boxes in Wisconsin. That votes of Arizona Republicans had been thrown out. That boxes full of votes had been smuggled into Philadelphia.

Trump was still making both his general claims and these very specific charges right up to the final “Stop the Steal” speech on the morning of Jan. 6. “… this year they rigged an election, they rigged it like they have never rigged an election before, and by the way, last night, they didn’t do a bad job either, if you notice … We will stop the steal! … We won it by a landslide. This was no close election. … There were over 205,000 more ballots counted in Pennsylvania. Now think of this, you had 205,000 more ballots than you had voters … So in Pennsylvania, you had 205,000 more votes than you had voters, and it’s — the number is actually much greater than that now … In Wisconsin, corrupt Democrat-run cities deployed more than 500 illegal unmanned, unsecured drop boxes, which collected a minimum of 91,000 unlawful votes. … They have these lockboxes. And you know, they pick them up and they disappear for two days. People would say where’s that box? They’d disappeared. Nobody even knew where the hell it was. In addition, more than 170,000 absentee votes were counted in Wisconsin without a valid absentee ballot application. So they had a vote, but they had no application and that’s illegal in Wisconsin. Meaning, those votes were blatantly done in opposition to state law and they came 100 percent from Democrat areas such as Milwaukee and Madison. 100 percent.”

Would a “reasonable jurist” know these statements were lies? Of course they would. That’s easy to see since every single time these arguments went before a judge they were uniformly rejected. Not all of the Trump team’s 62 lawsuits came down to statements of fact. Some were tossed with statements that explicitly called out the lack of any real evidence behind Trump’s claims.

“One might expect that when seeking such a startling outcome, a plaintiff would come formidably armed with compelling legal arguments and factual proof of rampant corruption. That has not happened.” — U.S. District Court Judge Matthew Brann

There were months in which Trump’s team might have fleshed out their claims. Months in which they might have explained the source of all those numbers. They didn’t do that. Instead they added claims about a dead Venezuelan dictator and servers hidden in Germany. Dominion Voting Systems is suing Rudy Giuliani for $1.3 billion for running a “viral disinformation campaign.” Trump repeated all those same allegations in his rallies, right up to the end.

When Trump’s attorneys claim that a “rational jurist” could not know that Trump’s claims are false, what they actually mean is an ignorant jurist.  Someone who had been subjected to all these false claims and allowed to view none of the actual information. Like a Fox News viewer. Because a rational, informed juror would definitely be able to tell that Trump’s statements were not just lies, but lies created expressly for the purpose of generating confusion over facts that are otherwise very cut and dry.

But what be most surprising is that Trump isn’t just saying that someone making these statements might have been believed before Jan. 6, he’s still refusing to admit that they are false. This explicit inclusion in his reply makes everything Trump has said before and after Jan. 6 fair game. House impeachment managers should be much happier about that than Trump’s legal team.