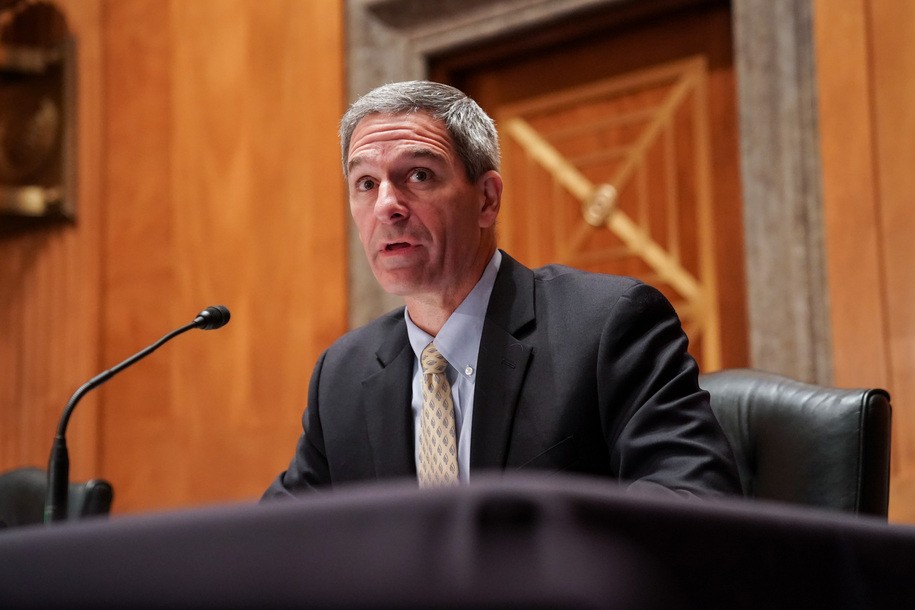 Thought we’d seen the last of unlawfully appointed former acting Department of Homeland Security (DHS) Deputy Ken Cuccinelli being a complete ass? We were wrong. Oh so wrong. Just a couple days after we found out that the very strange anti-immigrant loudmouth signed questionable agreements purporting policy changes by DHS had to be cleared with the likes of corrupt Texas Attorney General Ken Paxton, a whistleblower has revealed the existence of a second dubious agreement.

Like the agreements with Texas and a number of other localities, the policy was reportedly put in place specifically to kneecap reversals of the previous administration’s policies by the Biden administration. Like the agreements, it was an 11th-hour move. But what’s even more 11th hour than 11th hour? Because this second agreement was signed the day before Biden’s inauguration, and with the union representing out-of-control Immigration and Customs Enforcement (ICE) agents.

The New York Times reports that under Cuccinelli’s latest document, the union representing ICE agents would have veto power over changes and policies implemented by a Biden administration. “One clause in the contract requires homeland security leaders to obtain ‘prior affirmative consent’ in writing from the union on changes to policies and functions affecting agents,” the report said.

The report also said that federal law gives the government 30 days to cancel any such agreement, but it’s unclear if the Biden administration has started that process. But according to the report, the ICE union could challenge a termination. And, what a coincidence, the finalized agreements would be in place for eight years. Not five years, or 10 years, but eight years, or two possible Biden terms. Ken, why not just go all the way and say the agreement is only in effect when there’s a “D” next to the president’s name?

“Mr. Cuccinelli—an immigration hard-liner whose legal legitimacy to serve in senior positions at the Department of Homeland Security was contested—essentially sought to tie Mr. Biden’s hands, according to the complaint,” the Times reported. I mean, yeah.

The whistleblower, who is a current federal employee and is choosing to remain anonymous, filed the complaint earlier this week accusing the unlawfully appointed former official of “gross mismanagement, gross waste of government funds and abuse of authority,” the Times reported. David Z. Seide, the attorney representing the whistleblower, further said the employee “possesses information concerning significant acts of misconduct” by Cuccinelli.

In response to the report, Cuccinelli laid out a whopper. I mean, in the midst of these corrupt shenanigans, truly a giant, hilarious whopper. “I absolutely deny any mismanagement, waste of government funds and any misuse of authority,” Cuccinelli said according to the Times. “The agreement is entirely legal and appropriate, or we wouldn’t have executed it.” Insert your own favorite laughing gif here. Ken, if the new gig at the right-wing dumpsite Heritage Foundation doesn’t work out, maybe try a Chuckle Hut.

So, where do we go from here? The Times reports Cuccinelli is refusing to comment. Chris Crane, Breitbart enthusiast and head of that pro-Trump union, is also refusing to comment. Cuccinelli’s initial agreement managed to stop for now Biden’s 100-day moratorium on most deportations, but it’s entirely within ICE’s discretion to not deport someone. It can stop deportation flights. It can free detained immigrants. It’s refusing to do any of that. Biden should be cleaning house at ICE—and challenge this latest policy move.