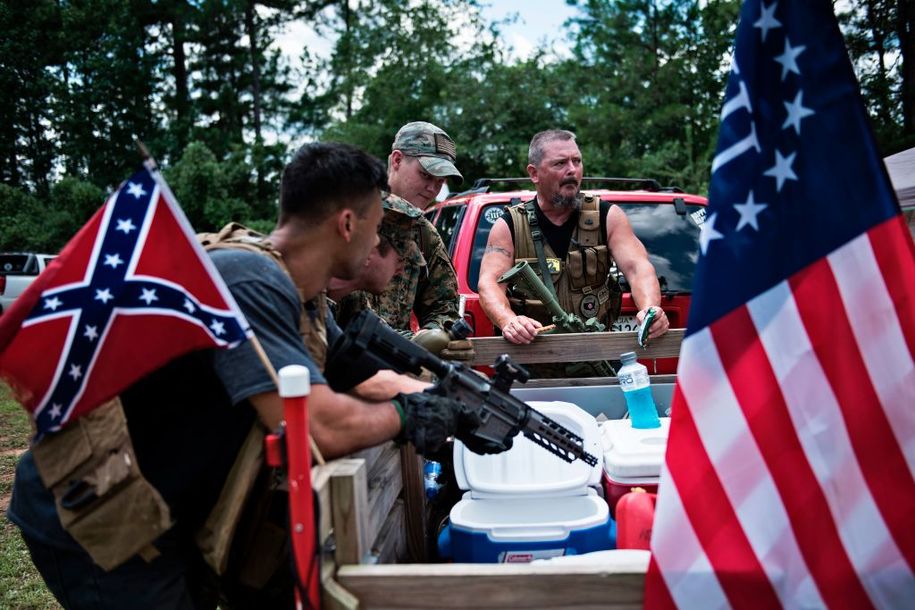 While Rep. Marjorie Taylor Greene fights for her political career in Washington, D.C., her extremist allies back in Georgia are preparing for a new phase in their battle to remake America into a fascist state. The Atlanta Journal-Constitution (AJC) reports that militia leader Justin Thayer, head of the paramilitary “Georgia III% Martyrs” group that infamously provided armed, militia-uniformed “private security” for Greene during a Georgia campaign rally, is so “disheartened” by the arrests of Jan. 6 militants that he no longer believes the United States can exist “as one entity.”

Instead, Thayer claims to be partnering with other Georgia extremists to push for the secession of Georgia, either via constitutional amendment or via “the collapse of the American experiment.”

We can presume that last part—working to secure that “collapse”—will be the allied militias’ continued focus.

AJC cites experts to warn that this appears to be the beginning of a new chapter in far-right extremism, one in which violent militias put aside their internal divisions and band together for the sake of “tactical” alliances. That may well be true, but the results are difficult to predict. The violent far-right is divided into myriad small factions precisely because it is a den of conspiracy theory-obsessed gun-happy crackpottism in which every other group is looked upon with suspicion; groups like the “Proud Boys” and other violence-promoting groups are roiled by never-ending infighting and drama, lawsuits between rival would-be leaders, and the violence that comes with the groups’ frequent dabbling in drug trafficking and other organized crime.

So while these groups may be inspired to band together due to the imminent threat of federal law enforcement sweeping through the rosters of those who conspired to commit violence on Jan. 6, it may be a prelude to escalating violence within the far-right, not just violence directed outwards. This is especially true as each group ponders, in the grand froth of paranoia that fostered each cell and sub-cell in the first place, which of them are moonlighting as federal informants looking to engage in a bit of sabotage against enemies and rival militias.

None of these people have much sense, and all of them are devoted to the notion that the best approach to fixing their problems involves being able to shoot more bullets than their enemies can. As the standoff by far-right extremists at an Oregon wildlife refuge proved in sometimes-maudlin detail, their partnerships and grand plans both tend to collapse in spectacular fashion when law enforcement comes calling.

The latest New York Times analysis counts at least 21 of those now facing federal indictments for the Jan. 6 insurrection as having “possible ties to militant groups,” or a bit over 10% of those indicted. That’s likely to grow as federal probes begin to identify who assisted the insurrectionists either in actual execution or in prior planning. A similar number were current or ex-military members.

“QAnon” conspiracies have filtered through each of the far-right groups as well—or rather, the QAnon movement is merely a point-by-point reskinning of the same neo-Nazi conspiracies that permeated far-right groups to begin with, one that gained considerable heft by wrapping its claims about “Jewish” plots and dominance in new phrasings that, at least briefly, restored a hint of plausible deniability for those repeating the claims of last century’s Nazi propaganda.

So these new supposed alliances are something to watch, but it’s not clear yet if it is a prelude to what Thayer and other extremists surrounding fascist Republicanism hope will happen—violent rebellion leading to the secession of conservative regions under a new, overtly white supremacist government—or if it is only prelude to a bloody civil war within the white nationalist militias themselves as each scrambles to dodge what can be expected to be an intense new focus by federal agents on potential domestic terrorism cells while tossing everybody else under the indictment bus.

The militias intend a new era of violence either way. But even in alliance, each group is so Trumpianly disorganized and paranoid by nature that their plots are likely to consist of haphazard acts of violence and terrorism only tangentially related to any organized “plan” to gain what they seek. Efforts by fascism-promoting Republican lawmakers to undermine government and justify electoral nullification and stochastic violence against political enemies remain far more dangerous and far more likely to succeed in toppling democracy in favor of the autocratic, white nationalist rule their host violent allies are clamoring for.