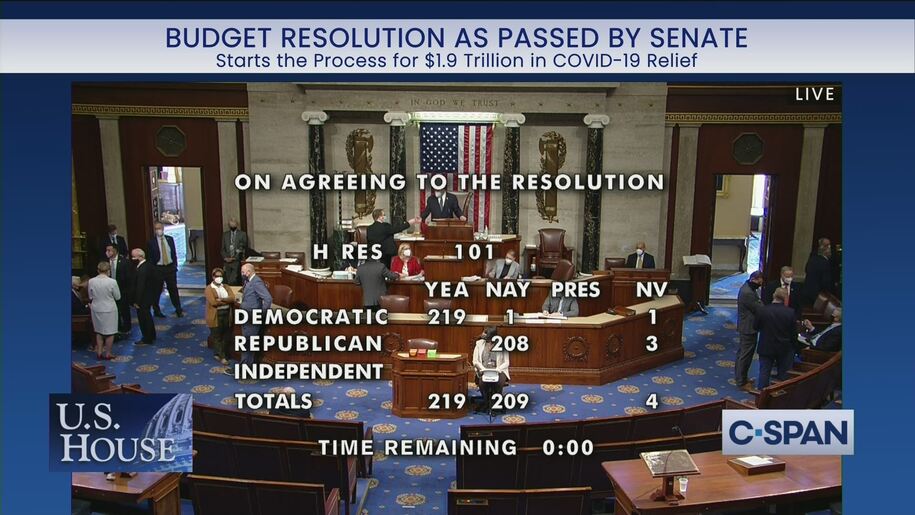 Moving quickly Friday, the House passed the Senate’s budget resolution to provide $1.9 trillion in COVID-19 relief, voting 219-209. In order to avoid having another entire day or more tied up in debate and procedural votes, the House used a self-executing rule, commonly called “deemed and passed,” to clear the way for work to begin in earnest. The special rule allows the House to simultaneously deem the resolution from the Senate considered and pass it, hence its nickname.

House Speaker Nancy Pelosi told Democratic colleagues in a letter Friday that next week, “we will be writing the legislation to create a path to final passage for the Biden American Rescue Plan, so that we can finish our work before the end of February.” The House committees and Senate committees involved have already been working on their respective parts of the final reconciliation package, which can pass in the Senate with a simple majority vote. The deadline Pelosi presents is very real. Republicans created a cliff in the last relief bill passed, ending some programs—including the unemployment benefit extension—on March 14. This bill has to pass well before that deadline for state unemployment systems to avoid a hiccup in providing benefits.

Pelosi reaffirmed the deadline Friday, speaking to reporters after House Democratic leadership met with President Biden. Asked if they’d be done by March 14, she said: “Absolutely. Without any question. Before then.” She added: “We hope to be able to put vaccines in people’s arms; money in people’s pockets; children safely in schools; and workers in their jobs.” In the meeting with Biden, she said he was “values-based, knowledge-informed, and strategic” in his presentation. She added that he told the Democratic leaders he was “open to bipartisanship,” but is focused on “getting results as soon as we can in the best possible way.”

Biden himself reiterated that in remarks Friday: “Are we going to say to millions of Americans who are out of work—many out of work for six months or longer, who have been scared by this economic and public health crisis—’Don’t worry, hang on, things are going to get better?'” Biden said. “That’s the Republican answer right now. I can’t in good conscience do that. Too many people in the nation have already suffered for too long.” He also accused Republicans of “rediscovering” their obsession over the deficit after having ignored it for the four years of Trump, including when they passed their massive tax cut.