Report from inside the Capitol Police rated chance of violence on Jan. 6 as ‘remote’ 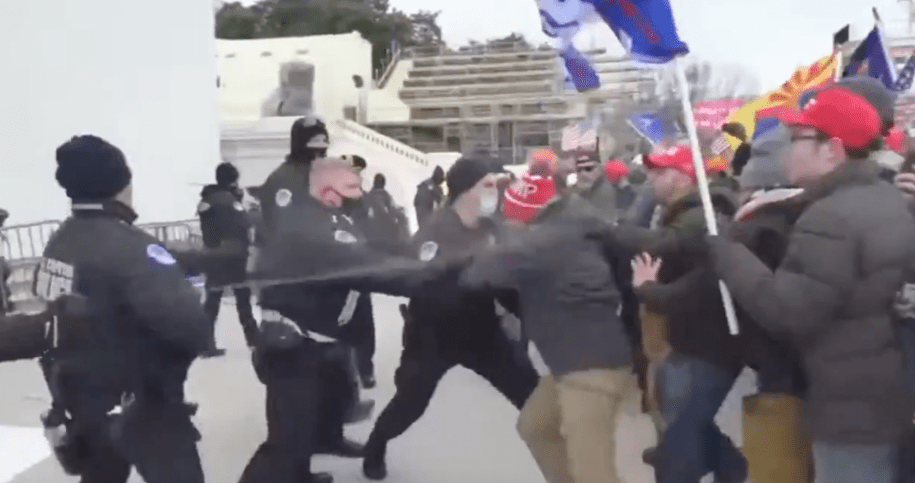 When the Senate trial for Donald Trump gets underway, one of the tasks for the House impeachment managers is going to be laying out events between Election Day and Jan. 6 to show how Trump encouraged his supporters in a lie and incited them to violence. But it’s going to have to wait until later hearings before the House and Senate bring in additional testimony on security issues related to the insurgency. Which is frustrating. Because a month after the assault on the Capitol, it seems the police, the Pentagon, and intelligence agencies still can’t agree on who knew what, who asked for help, or how things got so royally mucked up.

Since the Jan. 6 insurrection, the House has heard testimony about the lack of preparations made by the Capitol Police—despite an assessment by the acting chief, who said: “We knew that militia groups and white supremacist organizations would be attending … We knew that there was a strong potential for violence and that Congress was the target.” There has also been a continually shifting story over efforts from the police to obtain help from the National Guard.

A month after a Trump-loving mob stormed the Capitol in a deadly attempt to overthrow democracy, the truth about what police knew, and what they did to prepare, seems more muddled than ever. Because despite everything else, police labeled the potential for violence on that day as “remote.”

On Jan. 26, Capitol Police Acting Chief Yogananda Pittman told the House Appropriations Committee that two days before the event, the department knew that Trump’s rally was going to include white supremacist militias, that many of them were bringing weapons, and violence was expected. That was a big part of why then-Chief Steven Sund put in a request for National Guard assistance.

But The New York Times is now reporting that a report issued by the intelligence division of the Capitol Police on that same day painted a very different picture. That report looked at the groups of Trump supporters expected on Jan. 6 and rated them on a scale ranging from “remote” to “highly unlikely” when it came to any probability of violence. Not only did the report not anticipate anything like the thousands who assaulted police, surged into the area around the Capitol, and eventually went hunting for congressional hostages—the prediction seemed to be that the whole thing would be a snooze.

That assessment seems starkly at odds with Pittman’s statements about what the police were expecting on Jan. 6, and with Sund’s request to the National Guard. However, it could explain why the police had only 170 officers outfitted with riot gear. If that report circulated beyond the Capitol Police, it might even partially explain why then-Acting Defense Secretary Christopher Miller placed what seemed to be unreasonable restrictions on the few National Guard forces who were allowed to direct traffic around the city.

The only way to justify the results of the police intelligence report would be if the people in charge treated each of the groups who had applied for rally permits as if they were holding completely separate events. It would also requiring ignoring the context, as well as the violence associated with those expected to attend. Even then, it would seem impossible to produce such a low threat potential, seeing that the same “Stop the Steal” events had led to violence in other locations.

The “remote” chance of violence not only conflicts with everything Sund and Pittman said earlier, but runs counter to a statement from the same intelligence division of the Capitol Police that appeared just one day earlier. That Jan. 3 statement indicated that Trump supporters were desperate about “the last opportunity to overturn the results of the presidential election” and warned there was a significant danger to both police and the public.

If the Capitol Police appear to have been confused, they were not alone. In a letter sent to congressional leaders by Sund this week, he declared that the “entire intelligence community” missed the signs of impending violence. At a Jan. 5 meeting among various agencies, the Times sources say that “no federal or local law enforcement agencies raised any specific threats of violence for the next day.” If that’s true, it happened even though these agencies knew the Proud Boys, Oath Keepers, Three-Percenters, and other white supremacists militias were on their way to town. All of this makes it unclear whether agencies missed the signs or were simply told to ignore them.

What’s absolutely clear is that the House investigation into the security decisions that led up to paramilitary forces prowling through the Capitol—and left a small knot of Metro D.C. police fighting a desperate battle in the tunnels behind the House—need a great deal more investigation.

All of those things may have explanations that amount to inadequate analysis and criminally poor planning … but that seems unlikely. If any, or all, of these actions are rooted in politics that insisted on giving Trump supporters protection even in the face of expected violence, that’s not just criminally poor planning—it’s criminal.