Mars, Mars, and more Mars: Three probes are going to reach the red planet in the next two weeks 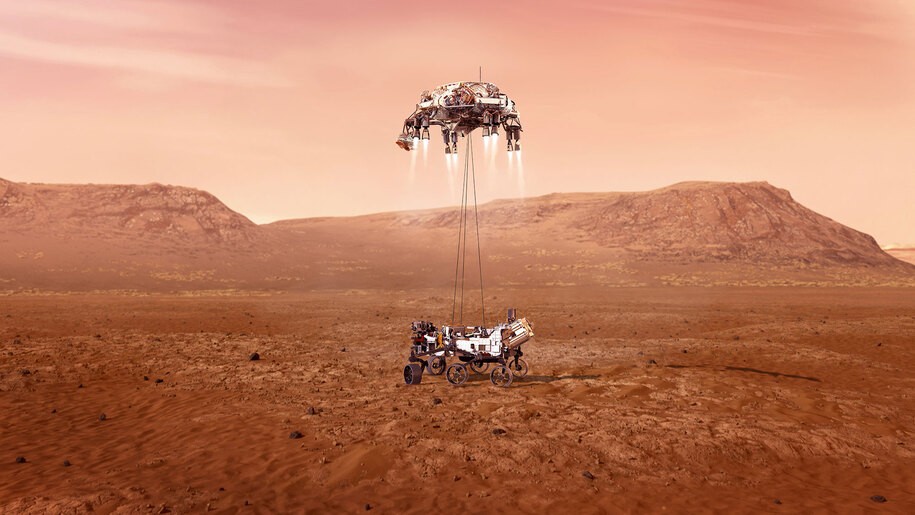 Once every couple of years, Mars and Earth get into a position where probes launched from planet #3 can get to planet #4 with a minimum of time and energy. The last time that happened, in 2020, three different probes from three different nations all lined up to take advantage of the relatively rapid transit times. Though the departure dates weren’t quite so close together, all three are about to make their arrival within just an eleven day window.

On Feb. 9, the “Hope” probe from the United Arab Emirates—not the first nation that comes to mind when you think of interplanetary space travel—will enter orbit. Just one day later on Feb. 10, China’s Tianwen-1 mission arrives. That mission includes both an orbiter and a lander, though the lander isn’t set to touch down until May. Finally, NASA’s latest rover, Perseverance heads for red soil on Feb. 18 using NASA’s incredible “Sky Crane” landing system.

And as all this Mars not-so-madness is going on, there’s a lot more happening back on Earth that could determine where NASA goes in the next few years. That includes a new test of the massive SLS system that is supposed to take astronauts back to the moon.

NASA’s Perseverance headed for Mars last July 30 on a United Launch Alliance Atlas V. It was the last of the three 2020 Mars probes to depart, and it’s going to be the last to arrive. But it’s landing, and the sheer amount of video and other data it should send back will definitely make its arrival the most exciting.

When it comes to Perseverance, it’s difficult to do better at explaining the details of this mission than “Everyday Astronaut” Tim Dodd did in this video. Tim does a terrific job of explaining what NASA wants to accomplish with this mission, how it differs from the Curiosity Rover that landed in 2012, and if you have forgotten just how terrifying NASA’s current landing system is for these large probes, be sure to take a look. The “sky crane” system appears utterly unbelievable, but it has already worked once. Fingers crossed in just a few days, it will work again. Oh, and Perseverance is bringing along with it the Mars helicopter—a little drone that will, hopefully, be able to fly about in the world’s thin atmosphere and provide some fresh angles on the landing zone.

As a bonus, this time around Perseverance is carrying new cameras that will allow it to record most of what happens during the “seven minutes of terror” involved in the complex landing. But getting those pictures back will only happen if the terror ends happily.

If you watch nothing else, take a look at this landing system. For any engineer, this puts the terror in terrifying. If you wonder why they do it this way, here’s a quick run down. First, Mars’ atmosphere is too thin for a parachute of any practical size to slow such a heavy lander down to a reasonable speed. So it takes rockets to really put on the brakes. But Mars’ surface is scattered with rocks and sand that could be whipped up by rockets so that they damage the lander. Solution — keep the rockets in the air and hang the lander from ropes. Seriously.

The UAE Mars Mission is a genuinely international affair. The Hope probe itself was constructed at the Laboratory for Atmospheric and Space Physics at the University of Colorado, as a collaboration between American and Emirati engineers. In addition to research centers in the UAE, both the University of Arizona and UC Berkley were involved in the probes design and construction. When completed at LASP, Hope then flew to Japan on a Ukrainian Antonov An-124 cargo jet. Finally it was mounted on a Mitsubishi H-IIA rocket and launched from JAXA’s Tanegashima Space Center last July 19. All of this happened in the middle of the pandemic, with scientists and engineers being required to quarantine at each new location, so the fact that they got it done in time for the launch window is amazing. When it arrives, Hope will devote most of its resources to studying Martian weather including watching over dust storms and looking at the changes brought on by seasons on Mars.

Like Perseverance, Hope also has a white-knuckle finale to it’s arrival on Mars — in this case, a 27 minute burn that is supposed to put the probe into orbit. This is a big deal not just for the UAE, but for the whole Arab world, who see this as another sign of the regions arrival on the world(s) stage.

The name of China’s Tianwen-1 roughly translates to “heavenly questions.” Hopefully, the orbiter and lander will actually provide some solid answers from this multi-year mission to Mars. The probe launched on July 23, 2020 — right in the middle of that optimal window for making a fast trip to Mars—a Long March 5 heavy-lift rocket.

Unlike Perseverance, which will go screaming into the Martian atmosphere at high speed, Tianwen-1 will execute a long orbital engine burn, like Hope, that will put the whole hardware collection into Mars orbit. The orbiter hardware is already collecting information, including not just imagery, but analysis of cosmic rays and other high energy particles in the space around Mars.

If everything goes as planned, the lander will drop away from the orbiter in May and head for a location in the southern part of Mars’ Utopia Planitia—a large, flat plain that may not be the most interesting landscape on the planet, but should offer good terrain for making a safe landing. Like Perseverance, Tianwen-1 will employ both a parachute and rockets on its descent. However, as a much lighter craft, it will not employ anything like the sky crane system. Instead, the Chinese hardware is laid out more like earlier American systems like Pathfinder, with a larger lander cradling a small rover.

If China successfully lands on Mars, it will arguably be just the second nation to do so. The Soviet Union’s Mars 3 lander made what seemed to be a soft landing in 1971, but failed less than fifteen seconds later after returning just part of one image. Since then, the U.K.’s Beagle 2 seemed to make a safe touchdown, but never communicated and the European Space Agency’s Schiaparelli lander made a very not-soft touchdown (i.e. it crashed).

The Space Launch System is the apparently ill-fated result of a long, long program to replace the Space Shuttle with a flexible system to take astronauts to Earth orbit, back to the Moon, and possibly beyond. That challenge has seen one whole program scrapped, and the current system built out of pieces-parts leftover from previous programs. That was supposed to make it both cheaper and easier. It hasn’t worked out that way.

After an expense that rivals development of the Shuttle, NASA now has just one SLS core sitting on a test stand at NASA’s Stennis Space Center in Mississippi. That core includes four RS-25 engines that previously flew as main engines on Space Shuttles. All four have since been upgraded to be even more powerful, and when the SLS actually launches, those engines will be accompanied by a pair of solid rocket boosters, similar to those on the shuttle but even longer. Put it all together, and SLS maxes out at 8.8 million pounds of thrust — making it about 15% more powerful than a Saturn V. (Though, for complex reasons, SLS can deliver less payload to the Moon than it’s famous predecessor.)

On Jan. 16, NASA invited journalists and the public to watch a test fire of SLS. It was intended to last eight minutes, matching how long the engines would need to fire to get the rocket to orbit. However, that test cut off after just over a minute, once again casting doubt on a program that has been plagued by setbacks, delays, and cost overruns. With a new administration moving in just days later, and future priorities for NASA unclear, there was a fair chance that the failed test was going to be the last breath for SLS.

However, President Biden has expressed his support for both SLS and the Artemis program that is supposed to return astronauts to the Moon within the next few years (the target is actually 2024, though no one really buys that target). With that support, NASA has decided to go ahead with a second test fire of the SLS lasting at least four minutes. That test fire is now scheduled for Feb. 8.

If completed successfully, the SLS core will be loaded up on a barge and scooted over to Kennedy Space Center, where it’s supposed to launch the Artemis-1 mission. That mission is expected to send an unmanned Orion crew capsule around the Moon on a mission that would approximate Apollo 8 (without the astronauts) and represent the first “full stack” test of all the SLS / Artemis hardware. Theoretically, that mission could still fly in 2021, but the decision to hold SLS at Stennis for a second hot fire likely means that Artemis-1 has now slipped to 2022.

On February 2, SpaceX conducted a second high altitude flight of its big Starship rocket. And, as was appropriate to Groundhog Day, Starship SN9 repeated the flight of Starship SN8 by having a successful flight, and a highly unsuccessful landing.

Starship is part of a bid by SpaceX to produce a system (Superheavy Booster plus Starship upper stage) that together can launch massive payloads, while being completely reusable. If successful, they could drop the cost of getting material to orbit by a factor of 100. That’s a necessary step if SpaceX founder Elon Musk really wants to build those cities on Mars, but it could also be a huge advance in just about every other thing that could happen in space.

To make it work, Starship has a unique landing style. The stainless steel ship “belly flops” into the atmosphere then comes down sideways using canards at the front and fins on the back to adjust its attitude and steer toward the landing spot. Then, literally at almost the last second, the rocket ignites its engines, flips itself upright, and makes a soft landing. Theoretically.

On SN8, the flight went great until the final seconds when one of the two engines failed to get enough fuel and began burning through it’s own hardware, resulting in a failure and a crash. On SN9, the flight also seemed to be going beautifully until those final moments when one of the landing engine failed to restart. The result was an even harder impact a momentary mushroom cloud of fire. SpaceX has been running a “hardware rich” program in which they’re willing to have failures to make advances. However, it’s none too clear that anything was learned from SN9 other than “what we’re doing isn’t working.”

Starship SN10 was already sitting on a pad when SN9 launched, and it’s expected that it will get its chance to fly in the next few weeks. When it does, SpaceX is likely to make some adjustments — such as trying to light all three engines on landing, then turning off any that have issues, instead of trying to light the bare minimum. If SpaceX can make this work, not only could Starship loft over 100 tons of payload, it could potentially carry 100 people. Really. It’s that big.