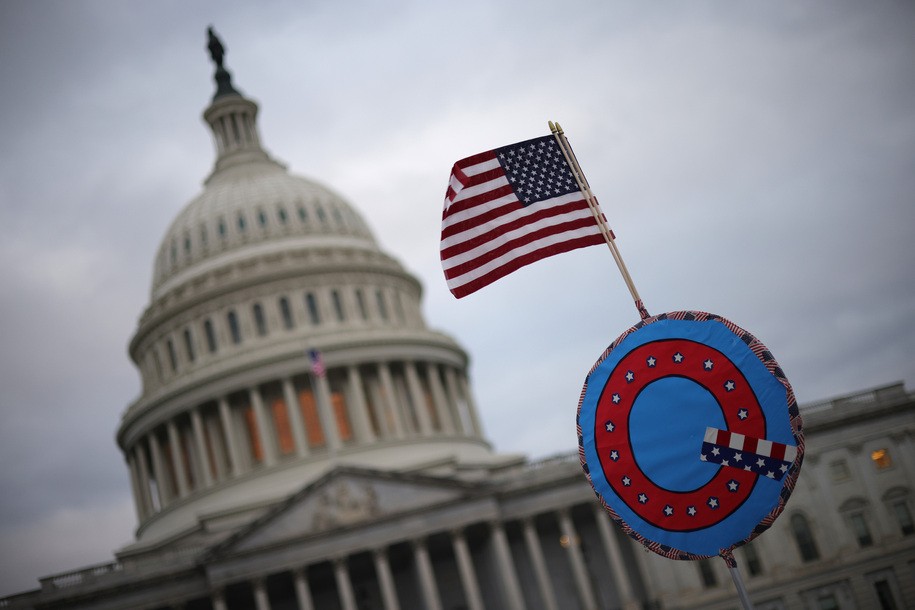 The question about the QAnon cult that lingers in many people’s minds is, “Where will they turn as the multiple failures of Q predictions begin to mount and their authoritarian belief in Donald Trump falls apart?” We’re starting to get an answer: The vigilante militia movement and white nationalism.

Militia groups in Georgia, the Atlanta Journal-Constitution reports, are forming alliances with an array of other Trump-supporting far-right organizations, including the QAnon groups aligned with Congresswoman Marjorie Taylor Greene. It reflects a much broader trend in the post-Trump world of the radical right in which what used to be distinct movements with widely differing sets of beliefs are commingling and coalescing into a singular far-right insurgency against liberal democracy.

The goal of the Georgia groups, according to Justin Thayer of the Georgia III% Martyrs, is to advocate for the state’s secession from the United States. He says the final straw was the arrests of people who were involved in the Jan. 6 insurrection at the U.S. Capitol.

“The way patriots are now being hunted down and arrested by fellow men and women who have taken the same oath has disheartened any faith I had in the redemption or reformation of the USA as one entity,” Thayer told the Journal-Constitution.

Thayer’s group have now allied themselves with other “Three Percenter” militias, mainly the American Brotherhood of Patriots and American Patriots USA (APUSA), headed by Chester Doles, a Dahlonega man with a background in neo-Nazi hate groups. Thayer foresees a need for Georgians to leave the union because of what he calls “the collapse of the American experiment.”

Doles also told the paper he had given up on democracy: “Things are different now. Everything has changed. We’ve seen our last Republican president in American history. The ballot box—we tried as hard as we could try. It’s not working.”

Amy Iandiorio, an Anti-Defamation League researcher who has been monitoring these groups’ online activities, told the Journal-Constitution that a “shared victimhood narrative” around Trump’s defeat at the hands of Joe Biden had fostered an environment that encouraged “tactical” alliances among normally disparate groups.

“We saw members of traditional militias, white supremacists, QAnon and other people in the same spaces and claiming very similar enemies,” she said.

These are “extensions of trends that extend back well before the Capitol insurrection,” Devin Burghart of the Institute for Research and Education on Human Rights (IREHR) told Daily Kos. “The silos that used to segment the far-right have been eroding since the days of the Tea Party. The Trump years obliterated that segmentation almost entirely.”

The two militia groups had earlier had a kind of falling out revolving around Greene and Republican Sen. Kelly Loeffler when the Martyrs showed up at a joint campaign rally in Ringgold working as the private security detail for Greene. Doles had championed Greene’s candidacy during both the primary and general campaigns with members of his group posing for photos with her, but had become an embarrassment when photos of him posing with Greene and Loeffler were publicized on social media. Loeffler subsequently disavowed Doles.

So when Doles showed up in Ringgold, Greene asked the Martyrs group to escort Doles out of the event, setting off a round of internecine bickering. Thayer said he and Doles have repaired the relationship.

“We both have the same objective and work with other organizations,” he told the Journal-Constitution. “So it was in the best interest of the movement to become ally’s (sic) and work together.”

Journal-Constitution reporter Chris Joyner was interviewed by Georgia Public Broadcasting. He observed that there was already a considerable overlap between people who joined vigilante militias and QAnon conspiracy theory subscribers:

QAnon is an entirely separate segment of sort of this universe of people who might have been at the Capitol. … Because it is so wide-ranging, parts of it have become ingrained in the militia movement to a degree that I found sort of surprising. 2020 was a really big year for QAnon. Part of that had to do with the pandemic, which was, you know, the conspiracy theories about the pandemic were absorbed into the sort of QAnon network of conspiracy theories. People were more inclined to stay at home. So they were online more often and they got sort of drawn into these at the time, Facebook groups that were incubators for QAnon and that did find its way into some channels of the militias as well. So there was there was crossover there between the QAnon conspiracy theory and … the Three Percenters, for instance.

Trump’s ongoing refusal to concede the election—and his promotion of groundless conspiracy theories about “election fraud” at the core of that refusal—created a pressure cooker-like environment in which all those disparate parts came together. And Jan. 6 became the bursting point for all that pressure.

“Their backs were against the wall,” Joyner observed. “This was a final opportunity. They felt like they were getting strong signals from the president himself as to there being some way they could change the outcome on this date if enough pressure was applied to, say, Vice President Pence or to Republicans in the Senate. I think one of the things that’s sort of striking about this moment, compared to others, is these are not groups that normally talk to each other.”

This was reflected in the way that the demographics of the people who entered the Capitol suggested a remarkable shift in the participants in the same far-right extremist groups that led the assault on the police barricades—the Proud Boys particularly, who have tended toward recruiting men between ages 18 and 35. The insurrectionists’ average age was 40, according to a University of Chicago study, and only a handful of the people arrested so far belonged to organized far-right groups; a high percentage were employed, many were business owners, most were middle-aged, and nearly all of them were middle class.

The Capitol insurrection, as the study’s authors concluded, “revealed a new force in American politics—not merely a mix of right-wing organizations, but a broader mass political movement that has violence at its core and draws strength even from places where Trump supporters are in the minority.”

These trends have been coalescing all during the Trump era. “Going back as far as Charlottesville, heavily-armed Three Percenters and Oath Keepers marched alongside Proud Boy streetfighters and unabashed white nationalists,” observed Burghart. “The President refused to denounce these ‘fine people.’”

However, 2020 produced two extraordinary events that had the effect of driving this “multidimensional approach” straight from the margins to mainstream American politics: the COVID-19 pandemic and the 2020 election. Burghart says:

The pandemic mobilized a significant mass base of individuals who were radicalized in record time. Ammon Bundy and his group People’s Rights demonstrated the power of armed confrontation and created a model for armed opposition to government intervention to stop the spread of COVID-19. Before the insurrection in DC, there are attacks on state capitol buildings in numerous states built on Bundy’s model. Those efforts have been designed to be easily repurposed to fight against anything they dislike. Efforts like Bundy’s also brought new constituencies into insurrectionism, particularly women.

The 2020 election, and the so-called “Stop the Steal” efforts to overturn the election results started to congeal the various segments of the far-right into an oppositional force against the Biden administration. The election cycle supercharged Qanon conspiracists as they reached a surprisingly large audience, while the Oath Keepers provided security at MAGA rallies and the Proud Boys got a shout-out from the President. In November, when election results showed Biden as the winner, we witnessed the coalescing of a wider range of far-right forces into mass opposition fueled by a sense of white dispossession and anti-democratic rage. That inchoate coalition included MAGA supporters, Tea Partiers, Qanon conspiracists, COVID insurrectionists, far-right paramilitaries, racist reactionaries, and unabashed white nationalists. Each of those segments provided multiple onramps onto the radicalization conveyor belt. The multiplier effect of those groups all working together turned the radicalization conveyor belt up to eleven, swiftly moving people from political opposition to insurrection.

After the Jan. 6 insurrection there has been some breakdown in intergroup relations and some internecine quarreling, mostly as a result of fallout from both the law enforcement crackdown on participants and the sudden deplatforming of far-right extremists from social media sites that followed the attack on the Capitol. This is not surprising since historically the American radical right has gone through periods of shakeup following high-profile public events involving them, such as the 1996 Oklahoma City bombing or the 2017 riots in Charlottesville, Virginia.

But as Burghart observes, these periods mostly involve reshaping of the movement to fit new conditions on the ground. “The situation inside the Proud Boys right now captures many different movement dynamics,” he told Daily Kos. “There is increased law enforcement scrutiny and multiple arrests on serious charges related to the Capitol insurrection. There are chapters in Indiana and Oklahoma that split from the national organization, largely because of that scrutiny (and the revelation that the group’s leader was an informant). Most importantly, however, is that there is a faction trying to pull the group in a more explicitly white nationalist direction. Despite all the internal chaos, the Proud Boys are still looking to recruit disaffected Qanon believers.”

As Joyner noted: “Over the last several years, the level of crosstalk between … disparate factions of outright racist groups, white nationalist groups to … militia groups, they may not share those same beliefs, but they there’s a thread that runs through it that had allowed them to talk to each other and coordinate primarily on social media in a way that we had not seen before. That sort of led us to this moment, I think.”

Burghart sees three major issues likely to bond the various sectors of the radical right during this period of adjustment:

Regardless of how it all takes shape, we can expect that the insurgency the Biden-Harris administration will be facing will be relentlessly conspiracist, with those conspiracy theories providing “justification” for the various kinds of violence they will unleash: Proud Boys-style street violence with armed vigilante militias participating as well, and various acts of domestic terrorism—both so-called “lone wolf” violence by radicalized individuals as well as organized small-cell attacks of trained paramilitary groups, probably on both government and media targets.

It’s going to be a very long four years, and probably much longer than that.