‘Racist targeting’: Video of 91-year-old attacked linked to surge of assaults in Chinatown 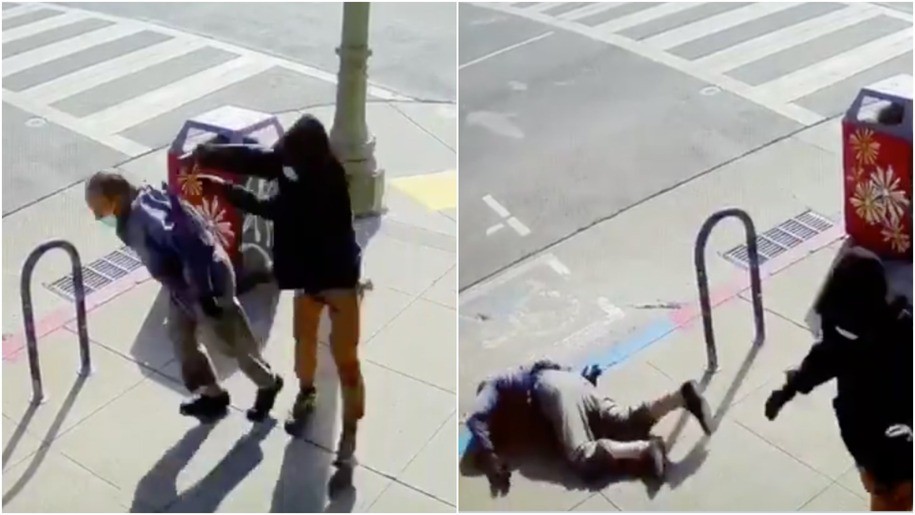 Disturbing video shows an unidentified person viciously pushing a 91-year-old man to the ground, sending his face-first into the cement sidewalk, outside of the Asian Resource Center in Oakland’s Chinatown community. The attack is one of 20 recent assaults and robberies in the community, all of the unprovoked, Carl Chan, the president of the Oakland Chinatown Chamber of Commerce, told the San Francisco Chronicle. Police told the newspaper the same person is linked to three of assaults on Jan. 31 on the 800 block of Harrison Street.

In the other attacks, a 60-year-old man and a 55-year-old woman were pushed to the ground, the woman knocked unconscious. The 91-year-old man and the two other victims were taken to the hospital and treated, police said. “So many people are afraid,” Chan told the Chronicle.

⚠️ WARNING: this video is hard to watch. Another shocking attack in Oakland’s Chinatown. 8th and Harrison Streets. Outside the Asian Resource Center. 20+ robbery/assault incidents in the neighborhood according to the Chinatown Chamber president. https://t.co/9bo9PzuqiL pic.twitter.com/8h6dkNA1TG

He told the newspaper he’s been a part of the chamber for about 35 years and the number of attacks that have happened recently is “unheard of.” “I understand some business owners do not wish to talk about it — and I understand why — because they are so afraid that by saying that, customers may not want to come and patronize them,” Chan said.

Oakland Mayor Libby Schaaf condemned the violence as “racist targeting of the Asian community,” and she apologized to the victims during a press conference with Chinatown Chamber and police officials on Wednesday. “I cannot imagine the trauma that you, your family, your loved ones, and this entire community is feeling as a reverberation from this violence,” she said. “We recognize that Oakland is not alone in this recent increase in violent crime.”

She said cities throughout the country are grappling with an influx of legal and illegal guns, court system interruptions, and the suspension of tactics and resources they would normally apply but can’t due to the coronavirus pandemic. In Chicago, the number of homicides increased by more than 50% from the end of 2020 to 2019, NPR reported. Los Angeles experienced a 30% jump in homicides, and New York City saw almost 40% more murders in 2020 than the year earlier, NPR reported. “It’s clearly related, in part, to the coronavirus and to the fact that people are cooped up,” New York Mayor Bill de Blasio said. “And it’s certainly related to the fact that the criminal justice system is on pause and that’s causing a lot of problems.”

Final national murder update of 2020: Murder up 36.7% in 57 agencies with data through at least September (though most have data through November). Murder up in 51 of 57, 37 of 58 agencies reporting murder up more than 30%. Spreadsheet here: https://t.co/vEhKHuFNrY pic.twitter.com/5HgVmwGmDS

Racist attacks targeting the Asian community have also increased since the start of the pandemic, with former President Donald Trump repeatedly blaming China for the spread of the coronavirus even though the country was able to get the spread of the virus under control much earlier than the United States.

Kelly Yang, a New York Times bestselling author, described back in April of last year how she was accosted at a San Francisco Bay Area dog park with her children. ”I am shaking,” Kelly Yang tweeted after the attack. “I went to the dog park to walk my dog. These people came very aggressively towards me [without a mask], called me an oriental & told me to go back to where I came from.”

I am shaking. I went to the dog park to walk my dog. These people came very aggressively towards me (without a mask), called me an oriental & told me to go back to where I came from. I asked her to pls stop coming towards me, she wouldn’t stop, finally I had to get out my camera. pic.twitter.com/deFxcMBGlN

About three months later, Trump tweeted, in a since suspended message on July 20: “We are United in our effort to defeat the Invisible China Virus, and many people say that it is Patriotic to wear a face mask when you can’t socially distance. There is nobody more Patriotic than me, your favorite President!”

Researchers at the San Francisco State University Asian American Studies program found in March of last year that since Trump referred to the virus as the “China virus” or “Chinese virus,” there has been an uptick in the news coverage of related discrimination against Asian Americans. “We’ve never received this many news tips about racism against Asians,” the founder of the Asian American news site NextShark told The New York Times. “It’s crazy. My staff is pulling double duty just to keep up.”

Schaaf called the targeting “abhorrent” though she never mentioned Trump by name. She said she plans to announce a new permanent leader of the Oakland Police Department. Then, she made an interesting pivot that closely resembled blaming councilmembers Nikki Bas and Rebecca Kaplan for a proposal responding to the needs of the community to reallocate a portion of the police department’s budget to support social services.

“I apologize to you councilwoman Bas, but I also have to set the record straight,” Schaaf began. She said she’s glad to hear that Bas and Kaplan now support increased police protection in the community, “but I have not forgotten, that this last summer, they brought a proposal to cut $25 million from the Oakland police department as a political statement, not because of operational or financial need.”

The mayor forgot to include the part about decades of racism and police brutality prompting a community and national outcry for a more preventative approach to policing, dubbed defunding the police. “Oakland residents are clear on what keeps us safe: housing as a human right, mental health and trauma support, family-sustaining jobs and worker protections, clean streets and fresh air, and restorative justice to resolve conflict through compassion and healing, not a badge and a gun,” Cat Brooks, co-founder of the Anti Police-Terror Project, said in a statement the East Bay Times obtained. “In other words, WE keep US safe.”

RELATED: 12 times Trump really did say that awful, racist thing you thought had to be fake news

RELATED: What does defund the police actually mean? Here’s what protesters and activists are talking about