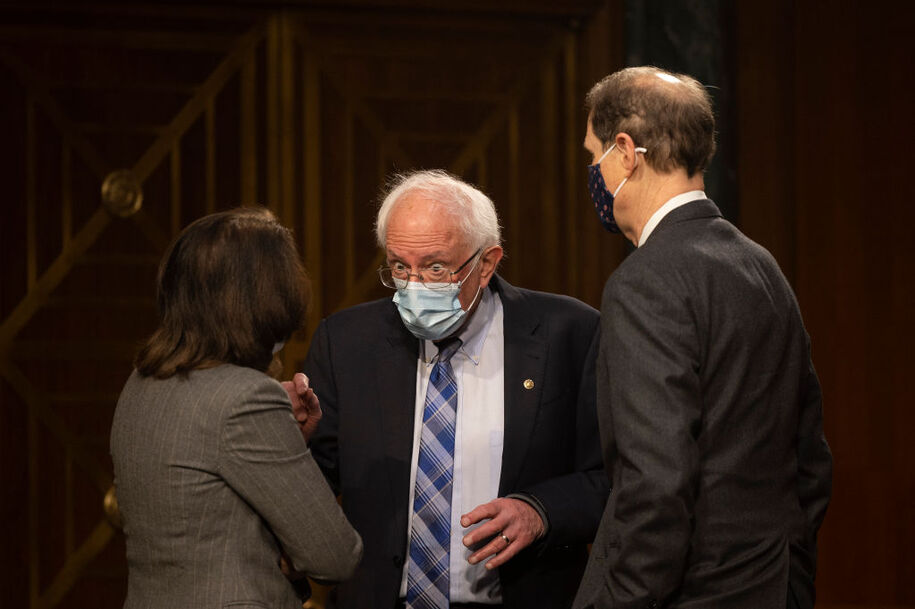 Democrats are having a public fight over something that really matters: how much assistance hurting people are going to get from them in survival checks. It’s a stupid fight, summed up best by Sen. Bernie Sanders:

Unbelievable. There are some Dems who want to lower the income eligibility for direct payments from $75,000 to $50,000 for individuals, and $150,000 to $100,000 for couples. In other words, working class people who got checks from Trump would not get them from Biden. Brilliant!

He’s not alone in this with powerful support from Oregon Democratic Sen. Ron Wyden, the new chair of the Finance Committee. The other side is being spearheaded by Sen. Joe Manchin, with back-up from Mitch McConnell’s favorite “bipartisan” water carrier, Sen. Susan Collins. They’re trying to keep payments from what they call “high-earning” families.

The gap between $50,000 and $80,000 includes a lot of people who, as Sanders says, got two checks already from the Trump administration and are expecting the third one everybody is talking about, a point also made by Wyden: “I understand the desire to ensure those most in need receive checks, but families who received the first two checks will be counting on a third check to pay the bills.” That’s so glaringly apparent that it’s hard to understand there is any constituency for this fight, including in the White House.

It gets even worse when you drill down to find out where the impetus for the cut comes from, as David Dayen has done at The American Prospect. The debate is being driven by a paper from Harvard economics professor Raj Chetty and others which showed higher-income households not spending the last, $600 round of checks immediately. Dayen uncovers the fact that the Chetty research is not on household-level income data. Instead, data for about 10% of U.S. credit and debit card activity sorted into ZIP codes by the address associated with the card. Those ZIP codes are then grouped “using 2014-2018 ACS (The Census Bureau’s American Community Survey) estimates of ZIP Code median household income,” according to the appendix in the Chetty paper. So, as Dayen says, the conclusion that low-income people spent their checks immediately while higher-income people did not, “is by saying that ZIP codes that had lower-income people in them between three and seven years ago contained a higher level of immediate spending than ZIP codes with higher-income people during this period.” A period before the pandemic.

That’s a damned big supposition. Claudia Sahm, a former Federal Reserve and Council of Economic Advisers economist, tells Dayen, “I think the paper is unsuitable for the policy discussion. […] It’s one paper at odds with 20 years of research. […] I know the sampling error has to be in the thousands of dollars, there’s no way it’s that precise.” What’s even worse about this paper is that they didn’t even disclose the out-of-date ZIP code basis for their data until late last week, more than a week after it had been highlighted in the traditional media and started taking hold. It’s still out there, with The New York Times opinion page giving Chetty and colleagues space to continue their badly sourced argument.

All that’s aside from the larger argument: we’re in the middle of a global pandemic and the economy is in tatters—just spend the money helping as many people as possible and worry about sorting out who should have to pay any of it back later. Because the need is so great and this isn’t a time to skimp. Treasury Secretary Janet Yellen has said as much, and thankfully appears not to be so much on board with this push to reduce payments, though the White House has been vaguely supportive. “The exact details of how it should be targeted are to be determined, but struggling middle-class families need help, too,” Yellen said on CNN this weekend. Asked if she thinks the targeting should be higher than $50,000 per person but less than $75,000, Yellen responded: “Yes, I—I think the details can be worked out. And the president is certainly willing to work with Congress to find a good structure for these payments.”

There’s also this: they’re still going to base the payments on 2019 income unless they have 2020 income filed by the time the relief bill is passed. Which means you need to file immediately if you’ve had a big drop in income. Which means the IRS is going to be flooded with returns at the same time it’s trying to make income determinations and trying to determine who gets what. But at least there is the recognition that a lot of people did not have the same income in 2020 as 2019.

Again, the survival checks have been means-tested already, with the first rounds of checks phasing out starting at $75,000 based on out-of-date data. Compounding that is this new argument based on really bad and irrelevant information. Not that what anybody does with their survival checks really matters right now, anyway. Worry about saving the maximum amount of people possible. That will make the economy come back stronger and faster and then the rest can be sorted out, if necessary, with tax reform.