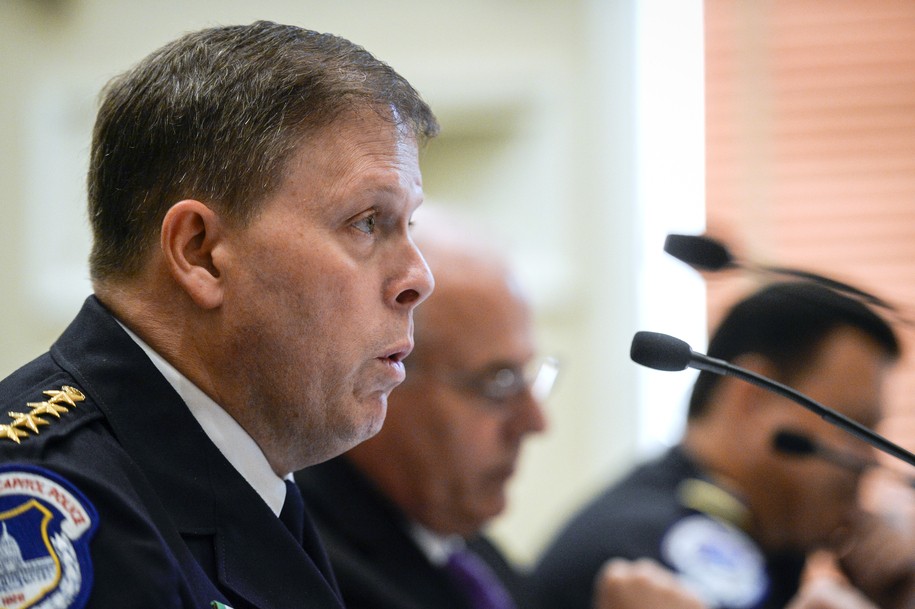 The Capitol Police chief who resigned facing intense criticism after the attempted coup at the Capitol on Jan. 6 laid out a pretty intricate timeline of what led to the insurrection. Unfortunately, the takeaway still seems to be, “It’s not my fault. It’s that guy’s fault.” Following House Speaker Nancy Pelosi’s request that former Police Chief Steven Sund step down, he resigned on Jan. 7 and followed up with an eight-page letter last Monday that The New York Times obtained, and numerous news outlets later reported on.

Dan Froomkin, editor of the independent website Press Watch, tweeted a link to the letter on Saturday with this fitting synopsis: “In this letter, former Capitol Police Chief Steven Sund blames everyone but himself for his staggering lack of preparation. Reporters should go reinterview everyone he threw under the bus to get the real story of why a white army didn’t really scare him.”

In this letter, former Capitol Police Chief Steven Sund blames everyone but himself for his staggering lack of preparation. Reporters should go reinterview everyone he threw under the bus to get the real story of why a white army didn’t really scare him. https://t.co/cKPmmWdqmF pic.twitter.com/E9oayMeUP8

“Perfect hindsight does not change the fact that nothing in our collective experience or our intelligence – including intelligence provided by FBI, Secret Service, Department of Homeland Security (DHS) and D.C. Metropolitan Police (MPD) – indicated that a well-coordinated, armed assault on the Capitol might occur on Jan. 6,” Sund wrote. Apparently, not even the numerous social media posts planning the insurrection.

Rep. Jackie Speier said in a letter to the president: “These platforms were crucial for planning the January 6, 2021, domestic terrorist attack upon the U.S. Capitol and the Congress of the United States. Yet social media is not reviewed during the military’s accessions process or even as part of the background investigation process for security clearances, despite collection and reporting of other intrusive, private data, such as financial and behavioral health information. This gap is inexcusable.”

Oh but Sund definitely tried, listing excuse after excuse, according to an ABC News report on his letter. He said intelligence he received led him to believe that the rally last month would be similar to past demonstrations for President Donald Trump, which Sund labeled MAGA I for a November rally and MAGA II for a December one, ABC News reported. He said in the letter, “members of the Proud Boys, white supremacist groups, Antifa, and other extremist groups were expected to participate in the Jan. 6 event and that they may be inclined to become violent.” Then Sund added that “this was very similar to the intelligence assessment of the Dec. 12, 2020, MAGA II event.” There was a “limited amount of violence and/or injuries to officers, and a limited number of arrests” at both earlier rallies, Sund said in the letter.

The former police chief said that “the entire intelligence community seems to have missed this.” It’s the kind of oversight or assumption of innocence that people of color are seldom afforded.

Timeline Sund laid out of the insurrection:

– On Jan. 4, both the Capitol Police Intelligence and Inter-Agency Coordination Division “assessed” the probability of arrests or civil disobedience and determined the threat to be “remote” to “improbable,” Sund said in the letter. Still, he made sure to assign every officer to man the event and have ready about 250 officers from “Civil Disturbance Unit platoons,” ABC News reported.

– On Jan. 5, Sund briefed his team to expect a “long day, large groups, and clashes that could possibly include violence,” ABC News reported. He also had a virtual meeting with “a dozen of the top law enforcement and military officials from D.C., including the FBI, U.S. Secret Service and the National Guard.” Although the Secret Service escorted former Vice President Mike Pence to the Capitol, the Department of Homeland Security failed to issue a threat advisory and no entity Sund earlier spoke to in the meeting indicated “there would be a coordinated violent attack,” he said.

– On Jan. 6, as the mob of white supremacists breached the capitol, Capitol Police evacuated legislators to safety and tried to secure hallways. He said Capitol Police, though “outnumbered and against tremendous odds … did not fail.”

Sund ultimately admitted in his letter that a “number of systems broke down” and that those who violated their oath of office “need to be held accountable.” He said he will do any- and everything requested of him “to help ensure that an attack like Jan. 6, 2021, never happens again.”

RELATED: Hero cop comes face-to-face with man so out of touch with reality he seems to consider Trump God

RELATED: Conflicting stories and finger-pointing from the people who failed to protect the U.S. Capitol