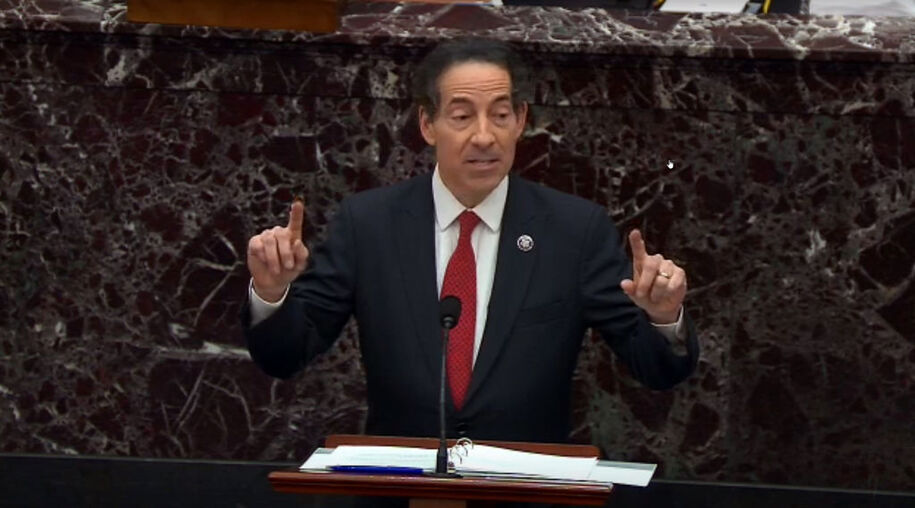 The second impeachment trial of Donald J. Trump—this time for inciting an insurrection—is underway, with Tuesday bringing four hours of debate on whether it’s constitutional to hold an impeachment trial for someone who is no longer in office. If that sounds familiar, it’s because the Senate already voted once on this question, with five Republicans joining Democrats to say yes, it is.

The quality of the Trump team’s argument was previewed when one of the lawyers they cited in a pre-trial document said they misrepresented his work.

Assuming Republicans once again join Democrats in moving the trial forward, the coming days will bring up to 16 hours of arguments over two days from both the House impeachment managers and Trump’s defense team, followed by up to four hours of questions from senators, possibly followed by debate over whether to allow witnesses and subpoenas.

At no point should we lose sight of the fact that this trial is about an insurrection aimed at preventing Congress from certifying the presidential election, in which five people lost their lives.

Castor still at it. Now he’s arguing … people get elected all the time. So nobody should ever be impeached. I think. It’s no more coherent than anything else he’s said.

Oh he did say “President Biden.” Trump’s going to be angry.

Castor is genuinely arguing at this point that Trump’s antics failed to keep Biden out of the White House so … no harm, no foul.

Bruce Castor watches a lot of television. And he wants to share everything he’s seen with you.

This is the “his attempted self-coup failed” defense.

It always helps to have someone leading your impeachment strategy who doesn’t know what a “high crime” is.

Now David Schoen is up. He was Roger Stone’s (losing) attorney in his (losing) case. And he’s worried, sir. “My overriding emotion is one of wanting to cry because of what I believe this proceeding will do to our Constitution.”

Ah. Schoen  is firing off that the House is full of “elitists” who have sneered at the “deplorables.” You have to stop this, because some people voted for Trump.

Schoen is giving the angry, Roger Stone Q-flavored version of the speech. But he also seems to have forgotten that there’s supposed to be a legal argument about whether the impeachment can go forward.

Instead, Schoen is just threatening the Senate. That’s one approach, I guess.

I present trumps defense team. Gotta hold my head on while I drink water. pic.twitter.com/qls21R4suh

You have to hand it to Schoen. He screamed about the House managers showing a movie … as an intro to his movie.

Schoen arguing that Trump was impeached too fast, and also not in time. Which followed Castor complaining that Trump shouldn’t have been impeached before the investigation into Jan. 6 was complete, except Trump couldn’t be impeached after leaving office.

Castor railed against House managers for referring to aspects of British common law. Now Schoen is saying their defense is grounded in “the history of Anglo-American jurisprudence.”

Have these two met?

Apparently, according to Schoen, the real villain here is Nancy Pelosi.

Schoen has props. Holds up a copy of the Constitution, then holds up a Little Red Book.

One reason that this Senate trial is happening after Trump’s departure is the McConnell recessed the Senate until January 19, so there really wasn’t any other option. Not that Trump’s lawyers would acknowledge that.

David Schoen is proving the old legal adage in the Senate today: “when you have the facts, argue the facts-when the law is on your side, argue the law-when you have neither…pull out your pocket Constitution, waive it vigorously in the air and let your angry Dad voice rip.”

Schoen suggest impeaching Jimmy Carter “for his handling of the Iran hostage scandal.” Kind of skips over the other guy who was, illegally, negotiating with Iran to keep the hostages in order to harm Carter during the election.

Honestly, I thought Schoen was wrapping this up an hour ago. But he just goes on.