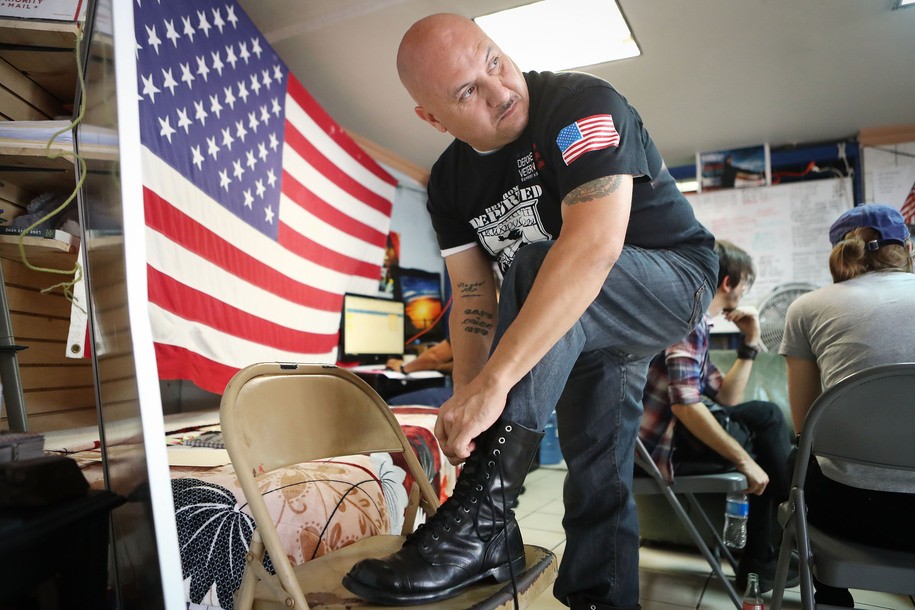 President Joe Biden’s rollback of the previous administration’s immigration policies will also include a review of that administration’s deportation of U.S. military service members and family members, McClatchy reports. Among those who may now have a chance to return home include Alejandra Juarez, the military spouse and mom of two U.S. citizens cruelly deported in 2018. “I’m so happy,” she told McClatchy after being told of the new administration’s review. “Because there’s so many people that need that. It’s not just me.”

The out-of-control Immigration and Customs Enforcement (ICE) agency’s targeting of Juarez in the summer of 2018 set off national outrage: her husband, Cuauhtemoc “Temo” Juarez, was a decorated Marine sergeant who served in Iraq. Despite urgent pleas from elected leaders like Florida Rep. Darren Soto—he filed unsuccessful legislation to try to protect the family—the previous administration deported her.

”Trump says that he loves the military,” the mom of two told Orlando Sentinel at the time. “This administration deporting me, what message are they sending to the military? That they don’t care about families? You serve this country, you might get killed, but, by the way, I don’t care about your spouse?” The previous president didn’t care, but the deportation of U.S. military veterans is a stain that in fact stretches back years. The federal government doesn’t even know exactly how many veterans have been deported, with the nonpartisan Government Accountability Office (GAO) finding in a 2019 report that ICE just didn’t track that data. Seriously.

“Because ICE does not maintain complete electronic data on potentially removable veterans it encounters, ICE does not know exactly how many veterans have been placed in removal proceedings or removed,” the report said. Advocates estimate 230 U.S. military veterans have been deported over the years. ICE has policies in place that it’s supposed to follow when it decides to take the oh-so-patriotic action to detain a military veteran, but the GAO found these were not being followed either.

The return of deported U.S. military veterans is possible because it’s happened, even during an administration as anti-immigrant as the previous one: in 2018, Hector Barajas-Varela, a U.S. military veteran deported to Mexico in 2004, returned home to the U.S. to be sworn in as an American citizen.

Barajas-Varela’s cause had won the support of members of Congress like Texas Rep. Joaquin Castro, who visited him in Mexico in 2017. Barajas-Varela was also greatly aided by a pardon from former California Gov. Jerry Brown for the conviction that eventually led to his deportation after he’d already served his time in prison. In issuing that pardon, Brown had written that Barajas-Varela “has shown that since his release from custody, he has lived an honest and upright life, exhibited good moral character, and conducted himself as a law-abiding citizen.”

During the time Barajas-Varela was living in Mexico, he founded the Deported Veterans Support House, or the “Bunker,” to aid other recently deported U.S. military veterans. Barajas-Varela returned to the U.S. following a lawsuit filed by the American Civil Liberties Union of San Diego and Imperial counties.

The Juarez family, and many other military families ripped apart by deportation, hope for that same chance. “In the two years since her deportation, Juarez and his daughters have visited his wife in Mexico,” McClatchy reported. “Estela lived with her and went to school in Mexico until the COVID-19 outbreak and the family decided it was safer for her to return to Florida. Alejandra Juarez has also made friends with other military spouses who were deported. Not all of the families stay intact.”

“America should never deport veterans,” Castro tweeted this week. “Four years ago, I led a fact-finding delegation to Tijuana to meet with deported vets who deserve to return and become U.S. citizens. @POTUS Biden understands the sacrifices of our servicemembers and will honor them.”