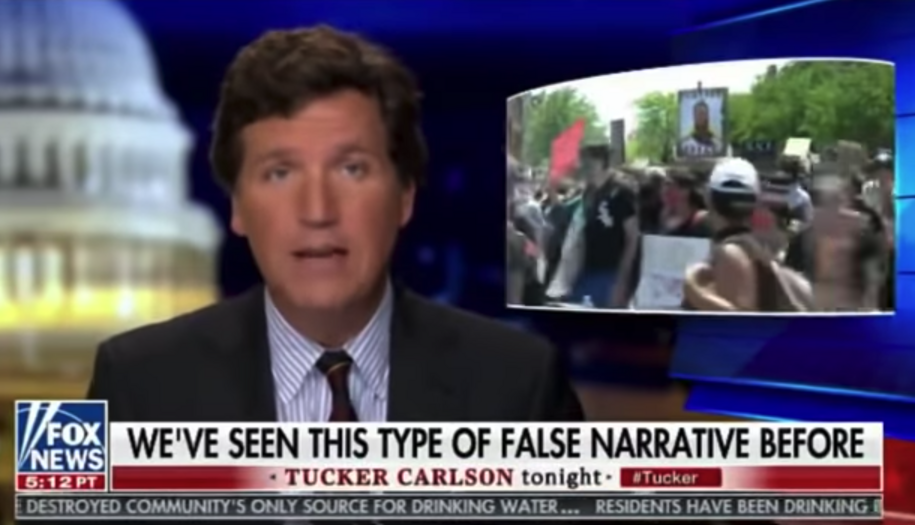 The sinking ship that is Fox News is helmed by the ghost of William F. Buckley Jr.’s toilet bowl, Tucker Carlson, financial liability Sean Hannity, and hoax racist Laura Ingraham. Tucker Carlson has been purveying his solid brand of fact-free, intellectually bankrupt, rhetorical monologue skills to promote racist COVID-19 conspiracy theories, and racist fearmongering of Black Lives Matter protests most of the year. Now, with Donald Trump’s second impeachment trial making it hard for Fox News to ignore, Tucker turned his attention on becoming a low-grade version of Infowars’ Alex Jones for the evening. But like everything Tucker, he adds a dash more white supremacy on top of what even Alex Jones has the capacity for.

Tucker went full deep state corporate conspiracy theory on Wednesday night in a long-winded, roundabout opening 12-minute monologue where he questioned the facts of the Capitol insurgency, arguing that Trump both didn’t incite the coup attempt, and then saying that it wasn’t a long-planned event, while also saying that it had to be either or of those two things. It’s a rhetorical trick where you create a straw man argument and then you step out of the fake argument to say that both positions are not real, thus negating your entire argument while pretending you have proven your argument. It’s the kind of intellectually vacuous dirtbaggery Carlson has made his entire existence on. But Tucker wasn’t done there, he needed a motivation for why everything we have seen has happened but also not happened the way we all seem to have seen it happen.

Tucker explains that the facts Fox News viewers know—make-em-up things Tucker pretends are facts—contradict the impeachment proceedings. He explains that the reason this grand lie is being told to the American people dates back to this summer “beginning of Memorial Day, BLM and their sponsors in corporate America completely changed this country. They changed this country more in five months than it had changed in the previous 50 years.” Whoa! How’d this happen?

Well, as Carlson tells it, after George Floyd died at the hands of Minneapolis police officer Derrick Chauvin, protesters “upended society.” But even more importantly, the whole thing was a lie. According to Tucker, “The story they told us about George Floyd’s death was an utter lie. There was no physical evidence that George Floyd was murdered by a cop. The autopsy showed that George Floyd almost certainly died of a drug overdose fentanyl.” Let’s pretend for a moment that one of the top reasons George Floyd’s death, unlike so many thousands of Black people’s deaths at the hands of law enforcement, set off mass protests, was because it was filmed by onlookers, while the sun was still out, and people were pleading with the officers to stop. Let’s pretend that that irrefutable fact does not exist.

Tucker is lying. His assertion about the autopsy is a lie. Not a misrepresentation of things but a straight-out lie. The autopsy notes the drugs in his system but the Hennepin County Medical Examiner’s Office autopsy report determines Mr. Floyd died of “cardiopulmonary arrest complicating law enforcement subdual, restraint, and neck compression.” Tucker Carlson is a liar. He’s a weak-minded and cynical white supremacist apologist asshole, whose lazy mind cannot even come up with decent bullshit defenses for his obtuse attitudes and positions. Tucker goes on to make the textbook white American racist claim that these BLM protests “destroyed” the “fabric” of American society.

Here’s a man who has never been a good person but now finds himself grabbing at the empty void that their destitute morality has left them protecting. The 11-minute mark is around the moment where Tucker Carlson takes his final steps off the ledge of last night’s drivel.

This is infowars shit, just a completely batshit conspiracy theory blasted into your meemaws face pic.twitter.com/pjHzzeo5At